A group of minority City Council members walked out of a Council meeting this afternoon, shouting “black lives matter” to protest a grand jury’s decision in Ferguson, Mo. last night.

The protest, led by Councilman Andy King, a Bronx Democrat and co-chair of the Black, Latino and Asian Caucus, interrupted the roll call at the beginning of a stated City Council meeting–black council members, joined by Latino and Asian allies, marched out of the chambers, reporters in tow.

“We are the New York City Council, representatives of a majority minority city [here] to proclaim in solidarity that black lives matter,” the group cried in unison.

At the end of their brief protest, the council members threw up their hands and chanted “hands up, don’t shoot,” echoing an oft-heard cry in Ferguson, where demonstrators took to the streets last night after a grand jury decided not to indict a police officer, Darren Wilson, for shooting to death Michael Brown, a black teenager, in August.

Many liberal commentators and local elected officials expressed dismay that no indictment was handed down. Protests rocked cities across the country, including New York, where thousands marched in Manhattan into the early morning.

The Ferguson decision came in the context of two recent police-related controversies. A rookie police officer accidentally, according to police, shot and killed an unarmed black man in Brooklyn last week. Another unarmed black Staten Island man died in police custody this summer after he was placed in a chokehold.

Without taking questions, the council members, about a dozen in number, marched back upstairs to the council chambers to continue the meeting.

“The black story and the American story are inextricably linked,” they said. 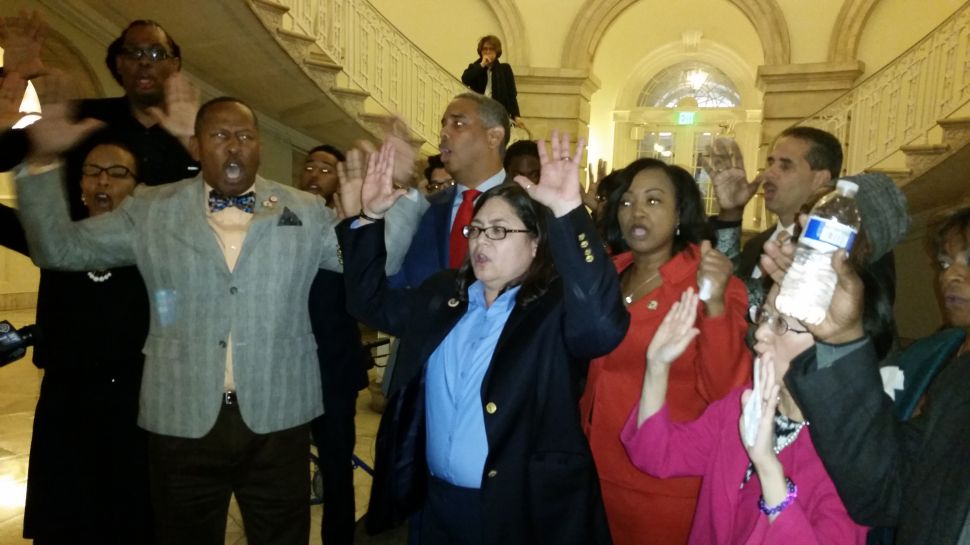