Rage over a Missouri grand jury’s decision not to indict Ferguson police officer Darren Wilson in the shooting of black teenager  Michael Brown spilled into the streets of New York for a second night in a row, combining with resentment over the deaths of Staten Islander Eric Garner and Brooklynite Akai Gurley at the hands of the NYPD, and disrupting several major highways and thoroughfares.

The epicenter of the reportedly thousands-strong demonstration was Union Square. Approaching the park from the south an hour before the scheduled 7 p.m. step-off, nothing seemed out of order–shoppers visiting the seasonal Christmas flea market, chess players, peddlers of cheap knicknacks. But at the north end of the park, a small crowd of irate activists was slowly swelling.

“NYPD-KKK, how many kids did you kill today?” they chanted in unison, alternating with other other perennial protest favorites, such as “No justice, no peace, no racist police!”

The crowd appeared overwhelmingly young, 30-and-under, and many were affiliated with organizations like the Revolutionary Student Coordinating Committee. There were others, however.

“The larger idea is justice. You know, since black people have been brought over here on slave ships, we have never had justice,” said demonstrator Bobby Muhammad, who came with a middle-aged group calling itself Urban Friends of Mike Brown, and who argued that the deaths of Mr. Brown and Mr. Gurley were part of a long trend. “Black people have been murdered here ever since we were brought over on the slave ships. So the murder of black youth is nothing new.”

The crowd began its long sojourn through the city by heading west on 14th Street, quickly spilling into the center of the thoroughfare itself, holding up tour and city buses and halting cars as dozens of police officers looked on. The procession turned left on Sixth Avenue, headed downtown.

“Black people are under attack! What do we do? Stand up, fight back!” The bigger group chanted as it walked into oncoming traffic on Sixth. “Back up, back up, we want freedom, freedom. All those racist ass cops, we don’t need ’em, need ’em.”

Protesters high-fived cabbies and box truck drivers who honked their horns in support, and the left-wing Rude Mechanical Orchestra band broke out their brass instruments and began playing marching music.

Participants the Observer spoke to drew similar parallels as Mr. Muhammad–and argued the protest was an opportunity to draw greater attention to what they perceived as trends spanning multiple states.

“We’ve seen injustice beyond injustice, both in Ferguson and in New York. It’s totally connected to how black and Latino communities, communities of color across the country are treated by police. Folks are resisting that treatment and pushing for systematic change. They’ve proven that the streets are for the people, by taking over traffic, by making a statement, by coming out in the thousands,” said Brooklyn activist and one-time Assembly candidate Jesus Gonzalez. “I think it elevates the issue of racial profiling in this country.”

The march turned left onto Houston Street, obstructing traffic in the west-bound lane. It was unclear at times whether motorists were beeping their horns in support or frustration. The participants reiterated the cry Ferguson made famous–“Hands up, don’t shoot,” which grew out of disputed reports that Mr. Brown had his arms in the air when Mr. Wilson fired the fatal shots.

By the time the demonstration approached the entrance to the Franklin D. Roosevelt Drive, the group was straggling along. Police on motorcycles and in cars and vans awaited them, and hundreds made for the entrance ramp at an all-out run when it appeared the officers were moving to cut them off from the artery.

Hundreds descended onto the parkway, jumping over the guardrails in the middle and mingling with cars on both sides. The chants died down and broke out again periodically as the procession moved uptown, and by the time the mass was nearing 20th Street, it appeared police had diverted northbound traffic.

The march got off the FDR at 42nd Street and headed to the United Nations, where just weeks earlier Mr. Brown’s parents had testified about the circumstances of their son’s death. There, thousands observed a prolonged moment of silence for Mr. Brown, and for four minutes the only sound was choppers droning overhead.

It was there that the march’s solidarity appeared to crack. One man stood on the roof of a bus stop and argued through a megaphone that it was incumbent upon decent police officers to denounce their abusive peers.

“There are good cops out there. Denounce your brothers!” the man pleaded to the police standing nearby.

It was apparently a sentiment not all of the protesters shared.

“Fuck that, we’re dying! We’re dying!” Another man shouted, and the two yelled back and forth for several minutes as the crowd walked on.

At the corner of 43rd Street, the crowd was again split. The plan was to march into Times Square, but a substantial number wanted to walk all the way to 125th Street in Harlem.

The former won out, and the crowd made its way around Grand Central Station–past occasionally applauding pedestrians–and at Bryant Park was joined by another contingent that had left Union Square at 5:30 p.m. and blocked the Lincoln Tunnel and the West Side Highway.

The reinforced cavalcade poured into the garish glare of Times Square, among dozens of police in riot gear and hundreds of befuddled-looking tourists. Mr. Gonzalez led the group in several more chants.

“Turn up, don’t turn down, we doing this for Mike Brown!” The mass shouted. “They say stand back, we say fight back!” 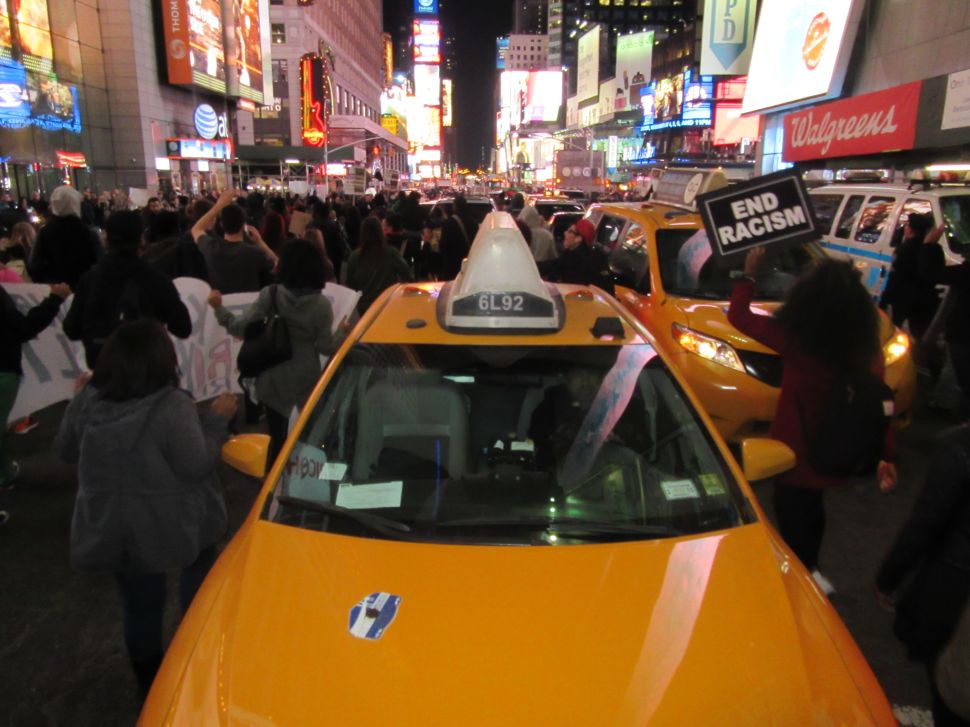