In  2012, La Jolla Playhouse in Southern California hosted a panel discussion concerning the racial discrimination charges that emerged after their casting  of a new musical workshop. That show, The Nightingale, was based on a 1844 fairy tale by Hans Christian Andersen that begins “In China, you know, the emperor is a Chinese, and all those about him are Chinamen also.” Yet the production only cast two Asian-American actors in the piece, and neither of them played the emperor, adding insult to injury according to members of the Asian American Performers Action Coalition (AAPAC), and others critical of the artistic decisions made for the production.

A new play that imagines the behind-the-scenes of just such a theater controversy is now at the Clurman Theater on 42nd Street. Playwright Han Ong’s Chairs and a Long Table is produced by the Ma-Yi Theater Company, whose mission is to shape “the national discourse about what it means to be Asian American today.” The work imagines members of an AAPAC-like organization preparing for just such a panel discussion in an echo-chamber of a drab conference room, all beige blinds, chalky green walls, stacks of file boxes, and the obligatory cooler.

Although fiction, the play cleaves closely to the actual facts of the controversy even down to the play’s setting in Ancient China, but changing specific names.

“This is my living!” growls the charismatic Moses Villarama as “Bill,” one of the actors chosen to speak at the panel as the stagelights go up. The rest of the 90-minute piece follows the performer/activists and a pro bono corporate consultant (a prim Julie Fitzpatrick) as they describe their own struggles to stay in showbiz without being relegated to demeaning stereotypical roles or bit parts. The ensemble here gives each character a chance to have their say, a la A Chorus Line, (“Oh, God, I need this job…”). and alternates between naked sincerity and scalding cynicism.

It isn’t clear exactly what Ong intends. Is he just giving a “backstage”-type look into how minority group members attempt to confront institutional racism in their chosen profession? Or is he also weaving in a subtle ironic commentary on so-called “colorblind casting” in the theatre and instances of clunky and conflicted political correctness? Whichever was intended to dominate the writing, Jeena Yi, as the group’s cheery factotum, brings a breath of sassy fresh air. Her cellphone glued to her hand, she chirps “Bill is angry. And I’m Korean. Which amounts to the same thing. It’s OK. I can say it. I’m Korean.”

But can she say it? 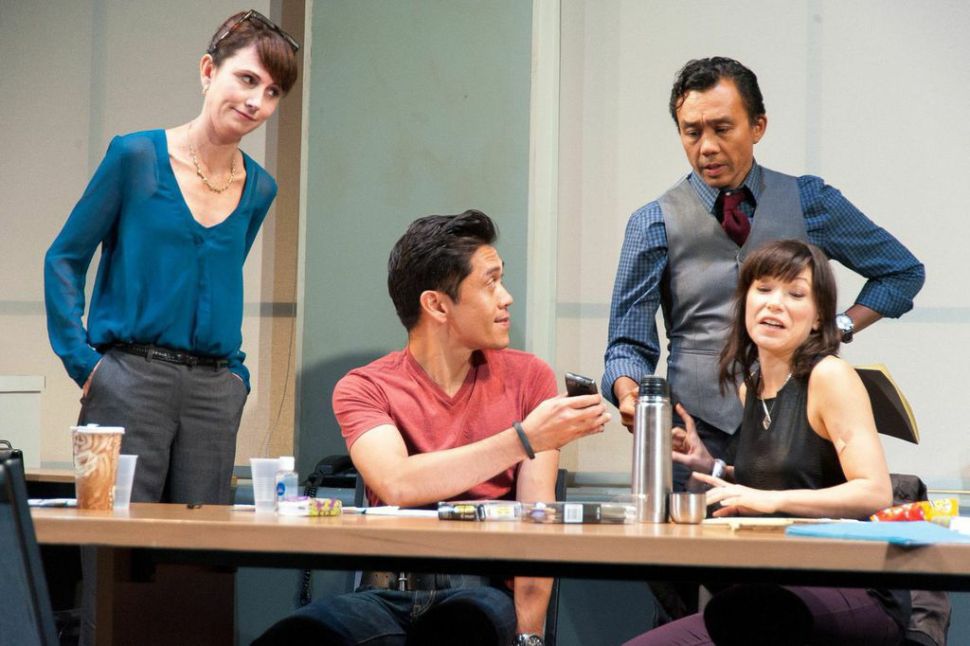