Terrorists explosions bullets Katherine Heigl and other terrible things. Okay, that was the first five seconds of State of Affairs.

After that, I could literally tell you ever single thing about this show based on the first five minutes alone. It’s basically a television stew made up of every other show you could think of that had a success rating of mild to hit — Homeland, the Blacklist, West Wing, Madam Secretary, Scandal, it’s all there. I mean I know it takes a lot to make a stew, but I once heard from a modern day scholar that “too many cooks can ruin the broth.”

So what have we got here? The show jumps right into the middle of a terrorist attack that happened to a convoy in Kabul, Afghanistan. Charleston Tucker — no, we’re calling her Charlie. Charleston Tucker sounds like a chimney sweep — Charlie Tucker was part of this convoy, and the attack killed her fiance Aaron. Jump forward a year and Charlie is recalling the memory of the terrorist attack in her shrink’s office.

“He was killed in a terrorist attack! That’s what happened!” Katherine Heigl screamed in an unlikable manner. She’s repressing something. We’ll come back to that later.

“And what are we doing to deal with that exactly?” Charlie’s shrink asks.

Apparently what Chimney Sweep Charlie’s been doing to deal is getting super drunk in sketch bars and having one night stands with sketch men. She’s been charming them with a bar trick her dad taught her.That bar trick is throwing random shit at other random shit.

“Charleston. Always going out, drinking, partying, I don’t think any good can come of that.” So you’re saying she’s going to have to get her life together in time for some upcoming important choices, shrink? Good thing we caught her at this point in her life.

Then we cut between two scenes — Charlie leaving her shrink’s office and Charlie waking up the guy she took home from the bar. She tells the dude that he has to go because she has to get to work. “It’s only 1:30 in the morning,” hookup dude exclaims. Well Charlie’s got to be at work by 2 am, because she’s only got six hours until the President’s daily briefing. Oh, that’s her job.

rant So you’re telling me that Charlie and this guy had time to get to the bar, drink at least enough to get drunk together, flirt, take a ride back to Charlie’s apartment, have sex, and sleep at least enough time for the guy to be pissed she’s waking him up, and it’s still only 1:30 in the morning? When did they get to the bar, like 7 o’clock? /rant

But when Charlie gets to work at the White House, she’s calm and collected. Ms. Popular cracking wise with all the other briefers. She runs into new briefer Lucas Newsome, and overpowers him with her womanly confidence. She introduces Lucas to Maureen, Kurt and Dashel, otherwise known as “Leave it to Briefer,” and…nope. Checked out.

Charlie’s going to be real good at her job. The best, dammit. She’s going to be so confident that even the President of the United States is going to be baffled by the level of her briefing. But in her personal life she’s going to be a mess inside. There’ll be a ton of scenes where Charlie makes the right decision at the right time, but then walks out of the room to stare at a picture on the wall of her dead fiance, breathing heavily. At some point she’ll probably have a panic attack in a bathroom, possibly a broom closet.

Something is going to shake up Charlie’s horrible personal life/successful professional life dynamic, probably on the very same day at work we meet her — possibly brought on by new guy Lucas Newsome, most likely because she’s keeping a secret — that’s going to, over time, force her to get herself together and confront her past. It will be hard, because terrorists killed her fiance. I’ve seen it done before, done better, and done without Katherine Heigl.

Also, at no point during any of this will Charlie be Carrie Mathison, and the show will be worse for it. 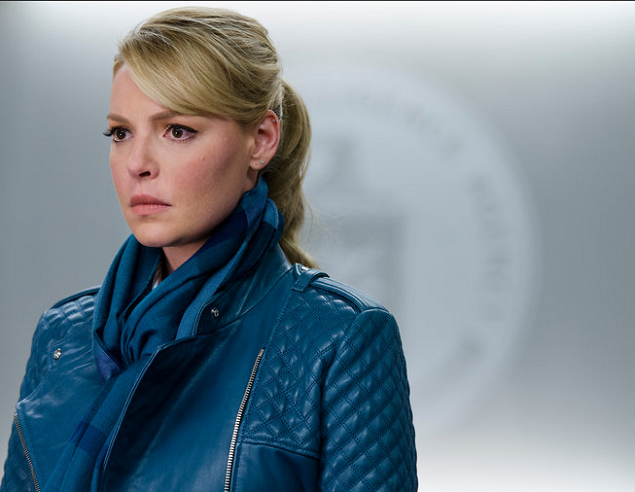