A few years ago, I wrote a column for Esquire about the joy of owning a small business – in this case, an adorable little laundromat in Westfield that I bought for my mother-in-law to run following her retirement as a family law attorney. It’s been a lot of fun and I take pride in employing good people and providing a needed service for the neighborhood.

But here’s something they don’t teach you in school: What to do when an employee of the restaurant next door drives over a six-inch curb, crosses 8 feet of sidewalk and through your front door in the middle of the night. Yes, there’s video.

On October 8, 2014, at approximately 10:20 pm, a server at Fujiyama Mama drove her car through our front door, knocking the glass out of the frame, bowing our bricks, denting a small shelf and leaving a bunch of car parts inside our store, the Westfield Laundromat.

The Westfield police arrived shortly after. The police called us at 10:48 pm. My business partner arrived on scene to assess the damage at 11:25 pm. The police gave us police report number 14-32409 and informed us that the driver had taken responsibility and would be taking care of the damage. The door was smashed so badly we couldn’t open it.

The store was supposed to open at 7 am, but it was impossible to open our door for business. An employee helped us tie the door to a truck and then helped jimmy it, so he and my partner finally opened for business 90 minutes late and cleaned up the crash debris.

We called Gator Investments, our Florida-based absentee landlords, to inform them of the incident and sent them some photos of the damage. We then met with the driver, Mei Wang, at about 9:30 am. She again took responsibility for the damage and informed us that she would prefer to pay cash to repair and replace all that was damaged.

That night, Oct 9, we had to come back to the store to secure the front door for closing since the door could not be locked. We had to use brute force to widen the door frame and coerce the door to close. We did the best we could to secure the door. We were then forced to close early, again losing hours of revenue.

The next morning, Oct 10, at 7:30am we bought supplies to temporarily secure the location. Since Friday October 10, the store has been secured by a very dubious-looking and unattractive padlock. By this time, my partner and I had spent about 10 hours of extra time – time we would not have been there — on damage, clean up and repairs and have had the entrance to the store marred by a very fishy looking contraption. We also had to close for approximately four hours of business time and irritated several regular customers.

The following Monday, Oct 13, we reached out to Ms. Wang in the morning to communicate our concerns. She said she was unable to speak at that time and needed an interpreter. Ms. Wang asked us to call back at 4:30 when she started her shift at Fujiyama Mama. My business partner called at the appointed time and spoke to Lily. He did his best to explain my concerns about the door and the importance of getting it done in a timely fashion, as well as how important it was to repair and replace what was broken. The driver and her representatives appeared impressively willing to take care of the matter in a timely and responsible fashion.

Unfortunately, the same cannot be said of the large-scale businesses involved, including our landlord and their insurer Allstate.

Here in New Jersey, where a gigantic hurricane ruins the state about every other year, we see a lot of television commercials touting the responsiveness of insurers. “You’re in good hands,” they tell us. Well, maybe not so much.

You’d think with a video like the one below and the photos you’ve seen here, these guys would be willing to cut us a check right away. There’s no dispute over who was driving and who’s responsible; as you can see, Ms. Wang was cited for reckless driving. If you brought a video and photos like this to Judge Judy, you’d be walking out with a max check before the first commercial.

But that’s not how it works in the real world.

In the real world, you get the runaround.

Gator had demanded an unconscionable security deposit from us when we first bought the place – some $36,000 for a business that I bought for less than a hundred grand with rent of $3744 – so they feel like they have us by the short hairs. The guy who sold me the place told me the same thing I eventually heard from some of my fellow tenants – Gator would use that obnoxiously high security deposit as a lever if and when it came time to move on. So I was extra concerned about getting the door and wall and brick repaired correctly. I didn’t want the driver to have some cousin “fix” it and then have Gator claim a couple years down the line that it was insufficiently repaired and wouldn’t you know it, it’ll cost $36,000 to fix it properly.

Having already spent way more time on this than I had on the laundromat in the three years I’ve owned it, I was not thrilled that we were calling all over the place to talk to glaziers and Chinese interpreters and masons. Couldn’t Gator just fix the damn window and wall and collect from the woman, who after all is an employee of their own tenant? Nope. They wanted us to deal with everything.

Luckily, I’m not without at least a little wherewithal.

I called Assemblyman Jon Bramnick, who is not only a Westfield resident but a good friend as well – we’ve eaten dinner at each other’s homes and been through a couple political wars together. He also happens to be a top-notch attorney who actually fights for the little guy. I’ve referred several clients to him over the years and all have been thrilled with the results. In fact, Bramnick is more than a close friend – he had been a client in my former life as a political consultant – and we shot b-roll for a spot of his in that very laundromat!

I knew this was small potatoes for him. I’m lucky to report that it’s small potatoes for me, as well. But there’s a principle at stake here and it makes me nuts that we could not squeeze a check out of these guys for our time and our lost business. We were asking for a total of about $4659, all of it painstakingly documented.

When I told Bramnick we were having a tough time, he advised me to call our own insurer and let them fight it out with Gator. But I didn’t want to do that. Post-Sandy, when my house looked like Dorothy’s in Oz, I filed the first claim in 18 years of home ownership. My insurer cut a check instantly, for $1800 to fix my roof and clear the gigantic trees. Then my premiums shot up by about a grand. F that – I don’t need my business insurance premiums to jump just cuz some exhausted lady recklessly drove over a gigantic curb and through my front window. Again, look at the video.

Gator and the representative for Ms. Wang told us to call Allstate, who insures the lady. Allstate asked us to fax – I’m not kidding – about a dozen documents proving all kinds of crap.

And now we’re in limbo. We can’t get anyone at Allstate on the phone. We can’t get Gator to totally guarantee that they won’t hold us responsible if the door and wall aren’t repaired to their satisfaction. Meanwhile, we sit with a door that looks like something from Sanford and Son and we’re out of pocket a bunch of hard costs, plus lost business time.

My next call will be to Westfield Mayor Andy Skibitsky. And that’s why I’m printing this here. At heart, this is a political story as much as a business story. Skibitsky is also a good guy. I got to know him and some of the council, like Keith Loughlin and Vicki Kimmins, a bit when I was in charge of New Jersey for Rudy Giuliani’s presidential campaign and I’ve also done some political work for him. He is affable and well-liked – he was named “Bob Franks Elected Official of the Year” this year — and claims to be pro-business. Then again, so do all politicians. But you don’t know until it comes time to actually stand up for a small business. Like a laundromat.

You see, I’d worked in politics for a decade by the time I bought the laundromat. I must have made a hundred tv spots and mailers that talk about “standing up for small businesses.” But until I owned a couple of them myself, I didn’t truly understand the hassles that ordinary businesses face from government bureaucrats. Want an example?

Union County regulates anything that is weighed or measured so that, for instance, customers who buy a gallon of gas can be assured of getting an actual gallon. They do that by sending around inspectors. Makes sense – they have caught gas stations selling like .95 gallons or selling regular at premium prices. In our laundromat, each quarter buys a customer 7 minutes of drying time. So they send the inspectors around to check that we’re actually giving the customer 7 minutes. And we do. But they don’t just check one or two of our 18 dryers. They check them all. And they charge us $25 PER DRYER for the privilege. (Not to mention the wasted electricity and gas!) It’s ridiculous. It’s not an inspection at all – it’s clearly a thinly veiled tax because they could have just as much efficacy by checking 1/3 the dryers and tripling the fine for anyone caught cheating. But that’s not what it’s about. It’s about revenue for the county.

When I bought the place, it had 16 dryers and I added two more. Adding those two served our customers better, but costs me $50 more per year. The entire mindset of Union County is “what’s an extra $50 to a business?” But the $450 I pay per year for this one tax, plus a ton more from a bunch of other taxes, is exactly why I didn’t go ahead and get two more dryers on top of the two I did add. Everyone loses – my customers, the guys who make Huebsch dryers, Cliff Ross at Metropolitan Machinery who sells me dryers, etc. That’s what people in government don’t understand with their constant “what’s an extra $50” arguments.

Anyway, this matter is coming to a head. If I don’t get a check for the money we’re out plus a new door, plus some sort of guarantee that I won’t be held responsible for any future assessment that the door wasn’t repaired correctly, I’ll be writing about this again, and often.

As for the political figures mentioned here, this is the time for them to align their actions with their rhetoric. I’ll be watching. 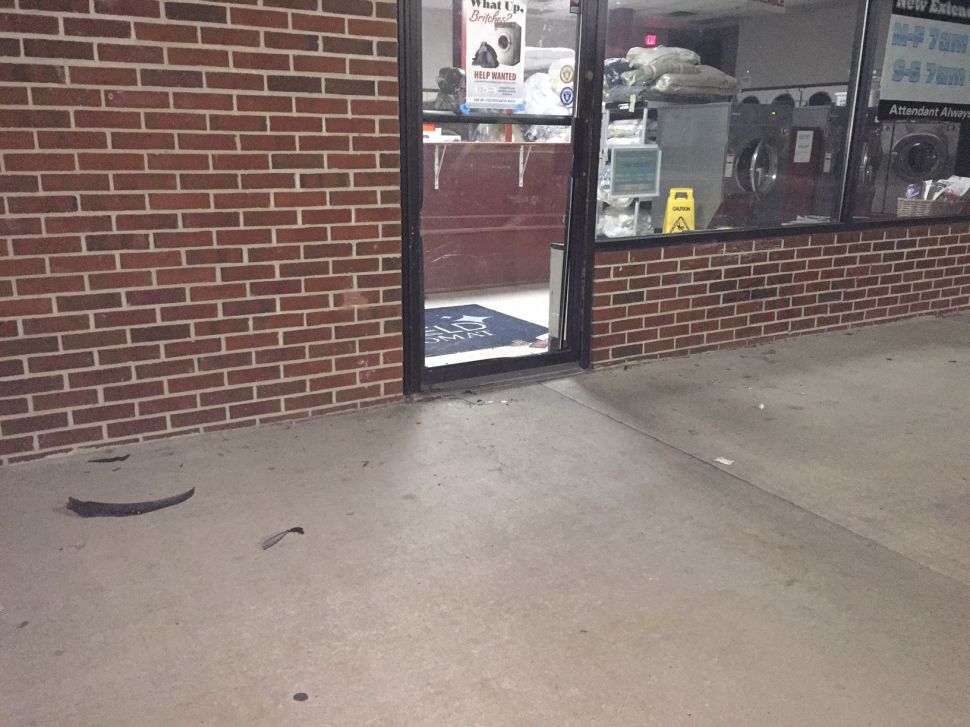