Up until this point, teens across the nation have been absolutely thrilled that Reign has covered all the issues that concerned them. So far. the kids can’t get enough of all the papal corruption,the religious persecution and the delicate balance of diplomacy a king or queen must enact between keeping both the peasants and the nobles happy. Frankly, a plotline about the pressure a teen monarch feels to start producing heirs because the future of the royal bloodline depends on it is the kind of relatable premise with which we can all identify.

However, I’d imagine that there are some kids that are like “Hey, I’m really stoked on all this conflict between the Catholics and the Protestants. That’s the kind of dramatic tension I can really sink my teeth into when I’m not playing Angry Birds or having all those rainbow parties that cable news says I’m having. BUT, by this point Elizabeth Tudor has to know that Mary has designs to contest her succession on the throne as England’s rightful queen, and I just KNOW Elizabeth isn’t having that. When do I get to see some tension play out between these two Renaissance titans?”

Hoo boy. Strap yourselves in, teens.

And then after that, some other kids are like,” Oh, hey, I’m  definitely loving all the political instability , economic strife and constant threat of famine following the brief but effective plague decimating the realm. HOWEVER, this season has been severely lacking in some expository legal explanation of who a 16th century bride’s dowry reverts to should her husband die and her family disown her.”

Well, you’re in luck, teens with oddly specific requests, because “Three Queens” covers both those points. And how.

First, let’s start off with Queen Elizabeth, who infiltrates France with a ruse so asinine, that it’s hard to be believe that, in real life, she actually emerged as the victor in the battle for the throne. In this case, Elizabeth dispatched a troupe of actors to travel around France impersonating Mary and Francis and earning the disdain of the people by extorting money from peasants and burning down their farms if they don’t or can’t comply. It’s a bit of a long game Elizabeth is playing to eventually turn the entire nation of commoners against her. Yeah, it’s kind of silly, but the CIA once plotted to assassinate Castro using an exploding cigar, so it’s not the most ridiculous coup attempt ever.

The real tragedy was that the impostor king and queen interrupted what should have been an amazing buddy cop comedy between Catherine and Mary. After escaping a carriage attack on their way out of town, Mary and Catherine happen upon an inn under the guise that they are ladies’ maids in order to protect their identities. Adelaide Kane shows off a remarkable comic timing and sensibility in this scene and Megan Follows is a joy as always. Anyone who writes fan fiction for this show should maybe take time off from all the Mary/Francis/”Frary” shipping and write the Catherine and Mary buddy cop movie these two richly deserve.

As usual, the carriage ride out of town between Mary and Catherine is another lesson in Mary’s idealism vs. the more cynical end of Catherine’s careful and measured diplomacy. In this ride, we learn that Mary was heading out of town to see a fertility specialist and Catherine was en route to curry the peasants’ favor through economic support, i.e. the deMedici fortune. Of course, neither of women achieves their goals because the day goes sideways thanks to a drunken imposter redhead queen and her phony king.

Also, because everything is damn twist on this show, the guards that initially rescued Mary and Catherine are actually in on Elizabeth’s plot and try to execute Mary and Catherine, but the guard gets his head stomped in via his horse because of some quick thinking on Mary’s part. As usual, Francis rides up to the rescue after Mary has already wrecked house and no longer needs rescuing. The good news is that the threat of losing Mary made Francis drop the ruse that her inability to produce a male heir is what’s causing the emotional distance between them. However, it didn’t prompt him to come clean about the fact that Narcisse knows he killed Henry. Or that he killed Henry in the first place. Truth be told, he probably shouldn’t come clean about that, but he’ll eventually have to the minute Narcisse uses this blackmail material to put him in an impossible bind.

Speaking of Narcisse, it’s kind of unsettling to see the tender and horny side of this season’s de facto villain. He’s still creeping pretty hard on Lola, who is in a considerable bind considering that her family disowned her over having the king’s bastard and has lost access to her dowry after the funds reverted back to her sham husbands family. She and Kenna have a sad, expository conversation on the how women of the time usually didn’t have access to their own finances and therefore doesn’t have freedom. Lola is looking at a lifetime of being bound to life at court and Kenna drives home the point that Francis had better live for a very long time to secure her stability. LOLZ. LOLZ. LOLZ.

As much as we can look back at how backwards things were for women in the 16th century, women weren’t able to have their own credit cards until the 70s. So, there you go.

Anyway, Lord Narcisse, aka the Swan Birthmarked Sex Jock from the anonymous sex journal swoops in to fix Lola’s dowry issue provided she’ll have tea with him. She resists, but ultimately gives in to a sexy archery lesson, proving once again that this show handles sexual tension way better than depictions of actual sex. Although, the orgasm sound Lola made when she hit the target was a little over the top, but whatever, get it, girl.

So far, Narcisse’s designs on Lola seem to be genuine, since no overt duplicity has been telegraphed so far. However, it’s a credit to Craig Parker’s considerable acting skills that he can be so convincing as a villain yet can equally sell a vulnerable, crushed out suitor. But watch that damn sex journal be some kind of Gone Girl style long con plant, cause that would be so typical of this freaking show. Anyway, the sexual tension between the two is further built up when Lola pays some exhibitionist ladies’ maid to stand in for her for some nude bathing while Narcisse peeps from a balcony.

I love this dirty bitch side of Lola and I know this affair with Narcisse can’t end well, but God does that character deserve to enjoy herself for once.

Also, Bash is on screen for about two seconds while Francis leaves him in charge of court  so he can go hunt down the missing Catherine and Mary. But hey, at least Bash didn’t have to chase down any ghosts. 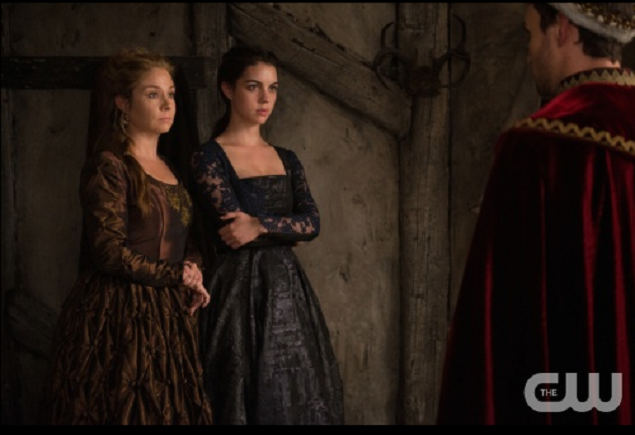