You know how when a long running series needs to insert a new character into the proceedings to generally stir the pot and threaten someone’s otherwise happy marriage or business arrangement and the character they write in is always some long lost sibling/cousin or child that has never been previously mentioned by anyone or only mentioned in passing? And when said new troublemaker character arrives, even the most skilled actors and actresses have the worst time trying to sell the fact that this new person had always occupied a space in everyone’s collective consciousness. According to some other recaps, Claude has been mentioned before while others mention an older daughter. So, the jury’s still out on whether the idea of her has been sufficiently planted prior to “The Prince of the Blood.”

This was a common trope in the Aaron Spelling universe. when previously unmentioned cousins and siblings were constantly moving into the Walsh home (namely Valerie Malone) or Melrose Place  with the sole purpose of fucking shit up for everyone. Well, French court now has its very own Valerie Malone, and it’s in the form of Catherine and Henry’s wayward daughter Claude.

It’s a pretty bad scene when even the usually incandescent Megan Follows can’t seem to sell the fact that Claude has always existed. When Francis sees her again, he addresses her as “Sister” instead of by name, as if to hammer into our heads that she has always existed and we should just accept her.

Given the fact that Claude enters the show by flashing her boobs at a guard for a swig of whiskey and boning a priest, the writers really aren’t being subtle about the fact that she’s there to cause trouble.  We also know she’s trouble because she apparently once conned Bash into thinking they weren’t related so she could hook up with him, effectively elevating her from bad girl to full blown sexual predator.  Way to break those taboos, CW. Since Bash and Kenna have been absolutely adorable together this episode, it’s only a matter of time before that secret gets out and threatens their otherwise improbably happy union.

However, Francis is too busy trying not get completely strong armed by Narcisse into signing an edict that will effectively put the persecution of Protestants into law. Compound this with the fact that there’s still marital discord between Mary and Francis over his refusal to come clean over the murder of King Henry. In an interesting clash between the need to paint Mary as a likable protagonist and the historical actuality, Mary is pressuring Francis to refuse the edict since she is apparently a champion of religious freedom. The fictional Mary also has extra incentive to advocate on behalf of Protestants since Greer and her Protestant husband have already been attacked because of Castleroy’s faith. Contrast this with the legacy of the real Mary Stuart earned the nickname “Bloody Mary” because she pretty much lived for beheading Protestants. Try saying that into your mirror three times.

Although Francis won’t spill the blackmail beans to Mary, he has no problem endangering Bash by confessing his murder to his brother. In the meantime, he sets Bash out to find the nanny who knew of Francis’s plot to kill Henry and Lord Montgomery, the man he initially hired to do the deed. Despite being given dangerous news, Bash must be utterly thrilled at the concept of chasing something other than a ghost.

Mary also interrupts Lord Conde’s tryst with another married woman to appeal to his Protestant sympathies and perhaps exploit the obvious crush he has on her and married women in general to help block the passage of Narcisse’s edict. Despite being a Catholic, Conde opposes the ratification of the edict and manages to get other lords to speak up in the process. It’s also revealed that Conde is “Prince of the Blood” which means that he is in very close succession to the throne. This coupled with the growing discord between Francis and Mary and his obvious preference for unavailable women should make the rest of the season very interesting.

Speaking of obvious preferences for unavailable women, Narcisse is still in hot pursuit of Lola, and Francis decides to exploit this by using Lola to plant a piece of evidence that would convict Narcisse as an English spy. However, after getting Lola into the bath, or as would Narcisse exposit, after getting Lola into a metaphor for vulnerability and intimacy, he confesses Francis’s crimes against Henry and correctly assumes that she was sent there by Francis to undermine him in some way. It’s a total “serpent in the Garden of Eden” maneuver where Narcisse poses the question of which man is actually being honest with her and which one is manipulating her and it works. This causes Lola to reconsider the framing him despite the fact that Narcisse wouldn’t think twice about having the father of her child, her best friend and her infant beheaded. Hell, he’ll probably chop her head off for good measure too. She’s clearly in too deep with a man who wants to decapitate everyone she has ever loved. But hey, the heart wants what the heart wants.

In any case, Narcisse still has the upper hand when it comes to overall politicking when he manages to strong arm Francis by threatening the lives of Mary and his mother in exchange for him signing the edict. This naturally enrages Mary, but Francis stays mum on his motive and tearfully suggests she go back to Scotland. At this point, he might has well tell Mary since so many people already know about the regicide. Seriously, what’s one more head at this point?

Oh, and Catherine is being haunted by the ghosts of two deceased daughters who are actively threatening to kill Claude, prompting Catherine to try and send Claude back into the ether from which she came. Seriously, enough with the ghosts. This shit ain’t Hamlet. 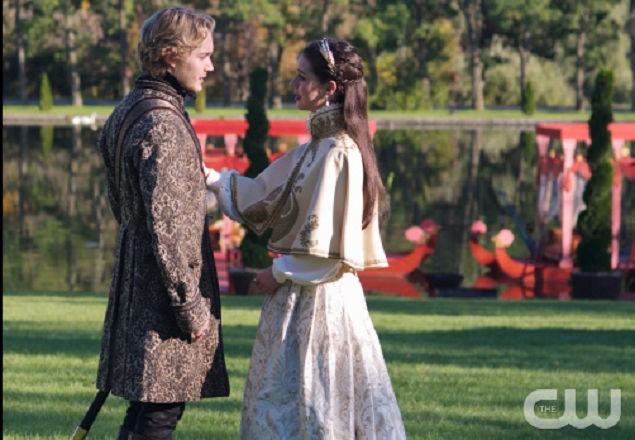