This week’s Revenge has Charlotte waking up where we left her, with Vince (the bad guy formerly known as Moon Man/Car Assassin). And yes, that is a gun in his pants, and no, he’s not just happy to see you, Char. He calls her “bait” which was not the pet name she was hoping for, and attempts to tie her up. Fortunately Charlotte seems to have enough cocaine in her system to match his man strength and fight him off, defeating him with a body-slam only a pro-wrestler could duplicate. The brawl made Vince seem turned on enough to make us all happy that this perv is dead, but like Charlotte, we have more questions.

David is prepping for his TV interview by not shaving or showering, but oddly asks Nolan to be by his side. This is probably a set up, but Nolan is eating it up like he’s Charlotte and it’s pills. All he hears is that his fake dad David loves him and he gets to be on television. Nolan now refuses to help Emily investigate her father any further and expects her to come clean. Em continues to talk about her dad like he’s an ex boyfriend saying, “I’m giving him some space.”

Looney Louise’s motives become clearer, as we’re reminded that she’s not going after Daniel’s good looks. Victoria is what she wants, which is why the page 6 story planted doesn’t really upset Margaux. It’s more a message to Vicky saying, “Remember me?” When Victoria rejects her yet again, Louise rebounds by single white femaling Margaux.

Jack is back to being a beat cop and Ben is just back to being super annoying. Ben wants to be a detective and seems to care more about Conrad’s murder than entire Grayson family combined. He even expects Jack to go along with this after he tried to pin that very murder on him last week. Maybe we should cut Ben some slack since seeing Jack shirtless made us all act a little crazy.

Charlotte finally joins Team Emily after discovering that Vince was tracking their dad. Emily helps by combining her quick thinking with Char’s proximity to drugs, and they make Vince’s death look like an overdose. During this, Emily stages a subtle intervention with Charlotte and sneaks in the fact her mother isn’t just a casual sociopath. Victoria is a murderer who killed Aiden. Charlotte responds with an expression that says, “That totally sounds like her.”

Emily calls Nolan and finds out he’s with David for his television appearance. It’s hard to see Nolan walk so arrogantly into a trap, but seeing him and Queen V spar again makes it almost worth it (“Are you worried I’m going to tell my new friend what a wretched woman you are?”). But Nolan gets publically thrown under the bus for stealing Amanda Clarke’s inheritance. Point Victoria.

Nolan is not to blame, but he’s also not helping himself here at all. David already brought up his suspicions about this after finding out that fake Amanda lived above a dive bar. As far as Nolan knows, the only thing that would correct this would be Emily coming forward. He knows that hasn’t happened. Nolan is so blinded by his love for live TV and the former David Clarke that he ruins his name, and later, his nose. Come on, Nolan. You’re supposed to be the smart guy around here.

At this point, everyone else is investigating David even if they don’t know it yet. Ben is catching onto someone living in the dead cop’s basement, but only Jack realizes it was David. This case reinforces their partnership and means, unfortunately, more Ben. Meanwhile Emily is investigating David’s other dwelling and figures out in minutes what the FBI could not figure out – His layer has been staged. The bureau should really hire her.

Emily finds Nolan bleeding on the floor from a dad-punch in her honor, and yet she’s still preoccupied. Look Em, we know you’re going through something here, discovering that the man who’s death you’ve been avenging may be a monster and all. But seriously, is it really too much to ask for you to chill out and be a friend for just a few seconds? Nolan just risked his life in the ultimate gesture of loyalty, and if he doesn’t stop crying soon it’s going to get weird for all of us.

As David falls back in love with Victoria, Charlotte goes to rehab, and Emily heads down an all too familiar path, it’s hard not to wonder – Are the Clarkes really any better than the Graysons? Or just more traumatized? 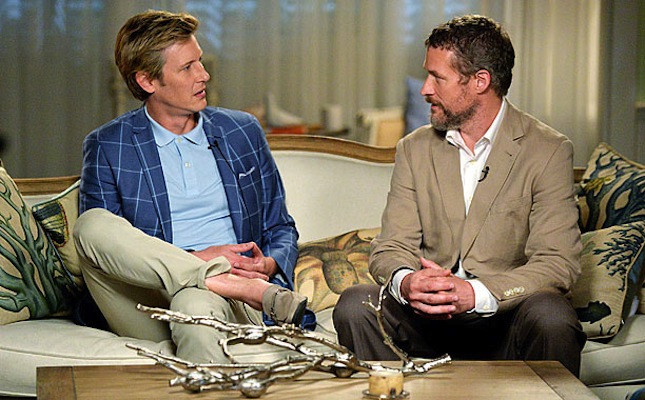