Last week left off with Emily’s revelation that her father is not who she thinks he is, and no, it’s not just the beard. So like any vigilante daughter, she breaks into her childhood beach house and steals what she believes is the knife that killed Conrad Grayson and a mysterious key. This is the kind of detective work that would make Ben proud if he wasn’t already the worst.

Daniel is doing some investigating of his own after Charlotte told him about Emily’s real identity, before leaving for some swanky rehab. This truth bomb overshadows another drama he’s at the center of, thanks to his mother  – Louise is trying to kill Margaux.

Louise’s mother appears in a hallucination brought on by way more than dehydration from a sauna. It’s clear now that her obsession with Victoria is based on the fact that her own mother is a red headed, southern version of Queen V. Louise’s mother tells her to kill Margaux by locking her in the steam room. Instead Marg escapes (with even better skin), and now Louise just cut and pasted Victoria heads over her mother’s pictures for no good reason. It’s all awesomely insane.

Daniel doesn’t get why Louise would try to kill Marg because he still thinks it’s all about him. The characters on Revenge may murder for a lot of reasons, but over an attraction to Daniel? Please. When he defends Louise, Margaux figures out that they slept together and that’s the end of Dangaux. Since she hasn’t been killed off (yet), Marg is in a position to use the media for revenge. Daniel is just in a position to date a younger, crazier version of his mother.

In terrible cop form, Jack is relaying every aspect of his new case to Emily. In terrible man form, he’s doing it all in a “can you not?” tone. Jack still looks good next to his wannabe detective partner, but to his credit Ben may be catching on to something. Regardless, the way I hate Ben makes me miss the way I hated Charlotte.

Jack also informs David that he was wrong about Nolan and encourages him to talk to fake Amanda’s friends. This is also Jack’s passive aggressive way of confronting real Amanda, which brings David to his actual daughter’s door. He’s confused but gives no indication that he thinks Em is Amanda. Emily only asks what we’ve been wondering this entire season – How does this weirdo not recognize his own daughter?

Though she’s clearly losing it, Emily keeps it together enough to attempt to turn David against Victoria. This works temporarily, prompting David to go to the strip club. Sure, he’s creepy enough to have gone for fun before, but this time he’s treating it like his dead daughter’s former place of employment, respectfully. Unfortunately Victoria got to the club first, bribing a dancer to speak favorably of her relationship with fake Amanda. Point V.

While Nolan is still Emily’s rock, he’s also unraveling. When he meets Louise, she pulls a string to make this happen even faster. She knows who Nolan is and likely about his connection to Victoria. For someone increasingly paranoid, Nolan is easily manipulated by her charms. And though it’s against his best interest, these characters have great chemistry and hopefully there’s more where this came from.

Nolan still manages to help Em and figures out where the mystery key leads to, mostly because she’d never drop it if he didn’t. Daniel then shows up to derail their plan. They exchange “remember when I shot you at our wedding” glances before Daniel confronts Emily about her real identity. With another person knowing the truth about Amanda Clarke and a limited amount of time to pull off a break in, Em jumps out of the stalled elevator. Daniel seems weirdly turned on by being used as a stepstool, but hey, they have history.

Em finds that the key leads to a flash drive full of photos of fake Amanda and gets super jealous that David was stalking the wrong girl. This is just one of many examples where Emily treats her father like an ex boyfriend, but no one can blame her for having Daddy issues. She finally snaps when she sees him with Victoria, confronting them both in a jealous rage. David only puts it together when he see’s the infinity symbol on her wrist. This is the one instance where a face tattoo would’ve solved all of her problems, but it’s hard to rock that look in The Hamptons.

Victoria storming out in a literal storm upstages their family reunion, and she gets conveniently electrocuted. We’ll have to wait and see if it was too convenient to be a coincidence. Does this mean that V has a contingency plan for hurting herself in almost every scenario? If there’s anyone crazy enough to pull that off, it’s Victoria… and maybe Louise. 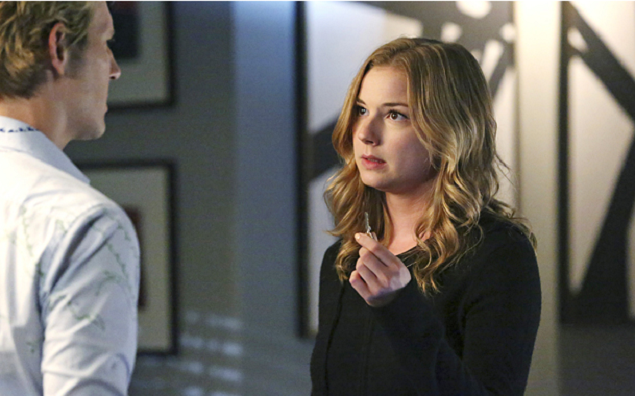