In true Revenge fashion, everything is insane even before the title sequence. Victoria is still electrocuted and Emily is still refusing help. Like most of us watching, Em assumes Vicky managed to manipulate her way through a fake, or at least an exaggerated electrocution. She survives easily, which supports this theory.

Daniel and Margaux are still fighting about not being Dangaux anymore, and the whole “cheating with a girl who tried to murder me” thing. Fair point. Meanwhile Jack finds Nolan at his newly acquired yacht club. Despite his discovery, Nolan still manages to slip in a few terrible detective jokes. So far, it’s business as usual in The Hamptons.

Emily is losing it and rightfully so. She came clean to her father and now he’s just disappointed in her lack of compassion and cpr skills. Nolan calms Em down, and reminds her to be rational. He puts it into perspective, noting that now she has a limited amount of time to win her dad back without V interference. “You’re going to have to do it soon, before that black heart of hers starts ticking on it’s own again.”

Victoria is in the hospital and it’s the perfect opportunity for Louise to get her crazy on and bring flowers. The security guard doesn’t let her in, but that doesn’t mean she can’t visit with the next best thing – a hallucination of her own mother, telling her to get pregnant with Daniel’s baby. Louise thinks this is a great idea, which leads to the most bizarre shower/near-rape/breakup scenes between her and Daniel. Despite his mommy issues, Daniel is not into this next level lunacy.

Of all people, Daniel seems to have a shot with his ex wife. After last week’s elevator scene, Daniel and Em’s natural chemistry is on display again. Daniel consoles her crying, maybe because he misses her or maybe he just misses the drama. Regardless, even when the dialogue isn’t the friendliest there is warmth between them. It’s no surprise that these two are dating in real life, when a relationship still seems plausible after a wedding shooting.

Louise may be rebounding with Nolan, after she convinced him to buy the yacht club last episode. In Nolan’s vulnerable state Loulan seems like a possibility. Fortunately Nolan finds her psychotic Photoshop project of Victoria heads, and slowly steps away. While he’s upset that he totally has a type (nuts), Nolan now has information Margaux wants. This means he has leverage to clear his name, and maybe the yacht club was an impulse buy.

Things are heating up for Jack, both at work and in his cop pants. The Conrad case gets taken over by the FBI, or rather Agent Kate, a babe who’s into Jack from the start. Even better, when Ben nerds out over the prospect of working with the feds he’s taken off the case, and Ben haters everywhere rejoiced.

Jack’s luck with the ladies might be changing, but he’s still the same incompetent cop we’ve grown to love this season. Not only does he update Emily on every aspect of his investigation, it takes him way too long to realize that if Em is at the hospital with David, then she already came out as Amanda. H Agent Kate doesn’t seem super sharp either, as she falls for the Clarke daughters’ staged overdose/murder framing. Hopefully she sticks around long enough to see this hot dummies make out.

The real issue is that Emily told David she’s his daughter, so now what? At least, that is how David is taking the news. It doesn’t help that whenever they start to have a moment, Victoria manages to upstage it. First, she gets electrocuted. Then she fake-flat lined at the hospital. She’s learned from past characters that if you can fake your own death, then you should whenever it’s convenient.

Things get extremely awkward when David is questioned about Conrad’s murder, and finds out that Emily planted the knife on Vince. We also learn that Vince was working with David in some capacity, as he took the photos of fake Amanda. It’s a real “do as I say, not as I do” situation. Don’t you hate it when your dad is mad about the murder weapon you planted on the guy you didn’t know he worked for? Ugh.

The closest thing they have to a bonding moment is when Em is conveniently and inexplicably hiding under Victoria’s hospital bed and two men attack. If David telling the truth then these men work for Conrad’s rival evil organization and snuck him out of prison. Emily brings back her ninja skills from past seasons and saves David and Victoria, gaining her father’s love and trust in the most dysfunctional way possible.

For Em, revenge is an addiction and no one should believe she’s giving it up. Instead, Emily is gearing up. She’s got a new torture room, a new group of bad guys to pursue, and a new, creepier version of her dad to deceive. Talk about a girl who has everything. 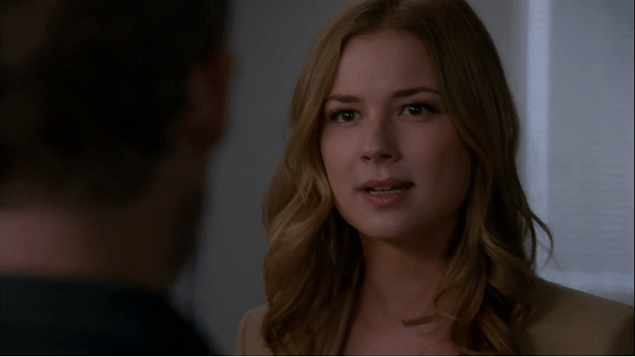