If you feel left out of the whole Twin Peaks phenomenon, we’re here to help! Every week, associate tvDownload editor Vinnie Mancuso attempts to figure out what the hell is going on in this town, while senior editor/Twin Peaks expert Drew Grant answers his questions. This week: ‘Zen, or the Skill to Catch a Killer.’

Hey, who wants to see me on my laptop trying to process what happens on Twin Peaks?

I didn’t sign up for this. Okay, I totally did but not for this. Just when I try to go and make a note of something that happened on Twin Peaks, some other surreal dreamscape/missing-appendage-ghost/blood-curdling scream distracts me. But honestly, everyone is always screaming, always.

EXCEPT for Donna and James. Enough with these two. I actually have to put up with Netflix’s giant yellow closed-captioning whenever these two talk because it’s all meaningful whispering. Well, it’s either meaningful or they just don’t want the still-warm dead body of their best friend and lover to hear them. “Are we going to be together?” Donna asks James this episode. Yes, against all logic and human decency you probably will be. Now speak up, Lara Flynn Boyle.

Elsewhere, Audrey’s Uncle Jerry is back from Paris and he brought sandwiches you guys. Like, the best sandwiches. Ben Horne is right on board with how amazing these sandwiches are. 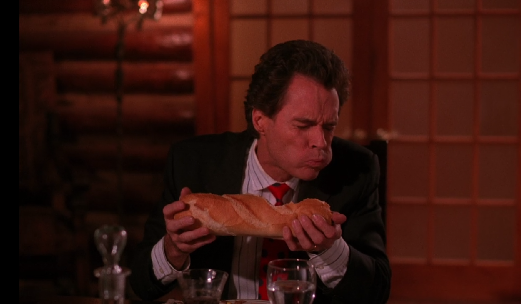 Ben and Jerry celebrate how fucking amazing these sandwiches are with a brotherly boat ride to the local whorehouse. TBH I thought one of the girls at this place was Laura Palmer at first glance and was all like SOLVED IT, but turns out she was just blonde. But seriously, a prosti-zombie Laura Palmer risen from the grave would make more sense to me than what actually happened for the rest of episode three.

Deputy Hawk (who until now I did not know was named Deputy Hawk but, awesome) calls Agent Cooper to let him know about that sketchy not-so-sketchy one-armed man walking around the hospital. Then Agent Cooper gets an anonymous note that simply reads “Jack with One Eye.” A couple more body parts here and we have a full suspect, baby.

Meanwhile, Bobby and Mike head into the dark woods looking for their drug money armed with Mike’s tiny knife. Seriously, it was hilarious how Bobby was like “you got it?” and Mike pulls out the most cliche guy-in-leather-jacket switchblade like “Uh duh I carry this thing around everywhere.” Anyway, Leo and his ponytail interrupt with a shotgun at least 40x bigger than Mike’s knife. Leo is unhappy because A) Leo needs more money B) Leo needs new shoes and C) Leo’s wife is “stepping out” with someone else. Of course that someone else is Bobby. Also, stepping out means sex.

I should probably mention that Leo had a sketch accomplice that mostly hid in the shadows and/or behind a tree. He didn’t say much. I couldn’t quite tell how many arms he had, but if the answer is < 2 he probably murdered somebody.

Agent Cooper, thanks to a dream he had about Tibet, now has the power to find out who killed Laura Palmer by throwing rocks at a glass bottle while Harry S. Truman reads some names. #JustDavidLynchThings. He hits the bottle without it breaking after Doctor Lawrence Jacoby’s name is said, and shatters it after the name Leo Johnson. Oh, boy that will definitely be important maybe. Also, I’m sorry I ever made fun of Lucy’s voice. It’s now my favorite, and her and Deputy Andy make me believe in true love.

What else, what else? So Donna (thankfully separated from Sir Mumbles) has a conversation with Audrey in the diner. Audrey is doing her usual spacey thing, talking about nothing, then says she “loves this music…isn’t it too dreamy?” Why yes, Audrey, I often find that the background music on this show that characters aren’t supposed to hear is too dreamy and whaaaaaat? That’s….not normal?

Poor Leland Palmer just wants to dance with the picture of his dead daughter, and by dance I mean do crazy-spins and scream. Of course his wife has to interrupt, but I’m not sure if she’s truly concerned or just jealous that someone else with the last name Palmer got to wail uncontrollably this episode.

And then…that dream. The dream that ended this episode. Yowza, where do I begin. Deeeeeeeep breath. So Dale Cooper is sitting in some red room but Dale Cooper is super old now, and there’s a little guy shivering in the corner and hey there’s the guy with one arm standing over Dale’s bed…the guy with one arm recites a poem that ends with “fire walk with me.” Also his name is Mike, and his name is Bob. The other “his” is that HORRIFYING man that Sarah Palmer saw last episode crouching by the bed. Bob is going to “catch you with [his] death bag,” which sounds like something I personally don’t want to be a part of. Back in the red drape room it turns out that the shivering little guy is actually…well he’s actually just a scary little guy. And also Laura Palmer is there, but she’s not Laura Palmer because sometimes her “arms bend back.” Oh, okay. Good news though, the little guy says the gum Dale likes is going to come back in style. Oh, oh okay. That’s apparently REALLY good news because now it’s dance time.

Bendy-armed Laura Palmer kisses old-Dale Cooper, and he wakes up. He immediately calls Sheriff Truman to tell him he knows who killed Laura Palmer. I…don’t?

I think…I think I may have questions.

So are Bob and Mike friends? Enemies? Is Mike even a good guy? He’s untrustworthy because he only has one arm!

Drew: You have to understand that Mike and Bob and Mike and Bobby are not the same pairing, although holy moly that will get confusing later on! As far as I know, there is no link between those two shippable couples. Without giving too much away, BOB (that’s the scary guy under the bed) and Mike (of the one-armed variety) are partners of a sort. Or former partners. They complete each other. Or they used to. They’re like the Buscemi/Stormare duo from Fargo: they have (had?) a job to do, and they had to do it together, whether they liked it or not. Until they didn’t.

Actually, am I allowed to frame that entire last dream scene as just a big giant question mark? What even was that?

Drew: That was the general consensus on Twin Peaks. I mean, how much can really be explained? It’s dream logic. Haven’t you ever had dreams that were just filled with weird symbology, where you’re eating a sandwich with your dead grandfather on the set of Veronica Mars (3rd season) and you realize  that even though you’re both vampires you need to go to the deli aisle for some shrink-wrapped meat products, ASAP? Because I had that dream last night.

I think what you could say about this sequence is that Dale seems unusually receptive to weird frequencies, and has unusual methods for an FBI agent, as we saw  this episode. For him, this dream isn’t necessarily just a hodgepodge of random bullshit from his subconscious. (Though it’s not clear that he realizes this yet: Dale is all about Eastern philosophy and the mind-body connection, so for him the dream might be about something his conscious mind “missed” over the course of the day.) Actually, it’s Dale’s “open-mindedness” that allows him to receive certain kinds of messages, transmitted to him in the form of dreams. From…elsewhere.

What’s up with Leo’s friend in the woods, Sir Hides-Alot?

Is it like, okay that I don’t care about anything going on with the Packard Mill?
Drew: You might want to pay a little bit of attention, although the whole Josie/Katherine/Ben Horne power struggle for control of the mill is the most soap opera-y element of the first season. But actually, yeah, I mean you can just kind of not care about it for awhile…luckily Twin Peaks doesn’t really trade in subtlety, so if there’s something important going on there, you will be told via crescendoing music, a hidden wall panel opening slowly, a billowing red scarf undulating across some lumber or some such. 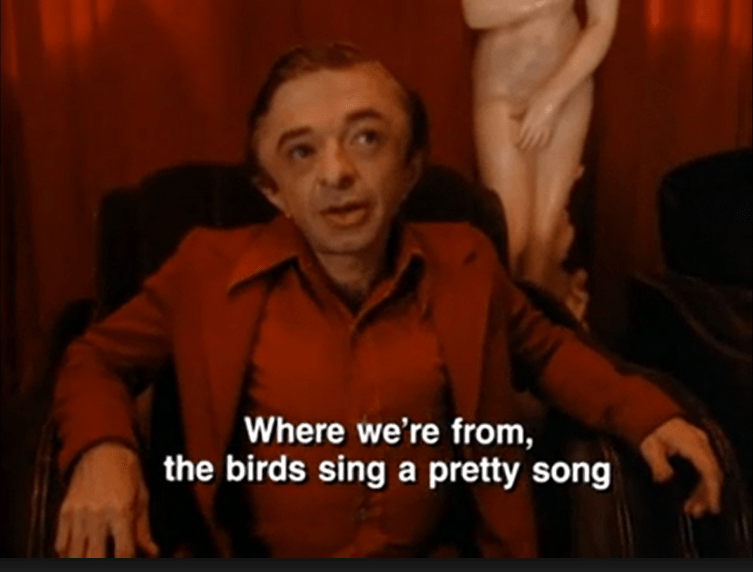