Dana and I ventured downtown to yet another trendy restaurant (that I am constantly being dragged to) with friends. As we waited for our table, the Ageing Platinum Benefactress emerged from the crowd and made her way over for a double air-kiss, leaving an imprint of her potent eau de parfum on my suit jacket.

I had always admired APB. She was impeccably turned out in vintage Chanel and her earrings had the handiwork and markings of the artful Place Vendôme jeweler. She hadn’t changed in years but looked somehow prettier and visibly softer. Had her work been performed by Impossibly Blonde and Glamorous Socialite’s husband?

“How have you been?” I asked, as she withdrew her iPhone from her handbag.

“Here,” she said, shoving under my nose a photo of her scantily clad daughter who was seductively posing at the infinity pool of the fabled hotel in Antibes. “Isn’t she beautiful?”

She scrolled for more photos, then retrieved one of her son. “Isn’t he gorgeous?” I think you should use him in one of your campaigns.”

When I hesitated to respond, she practically shoved the iPhone into my sight line. “Isn’t he GORGEOUS???” she implored again, showing me photos of him in upscale action poses, playing polo and shooting clay pigeons. Her tone demanded an affirmative response.

“You must be very proud of him. A handsome young man,” was all I could think of. “And I am sure he has all the social élan of his mother,” I added, raising an eyebrow.

“He’s the next big thing. I’ll have his agent call you. I heard you have that new agency Swat something,” she said. “Sounds cute.”

It wasn’t the first time I had been subjected to someone’s “wealfies,” a term I coined to describe selfies taken in a luxury context that confirm one has money, status and social currency.

While poor digital manners have abounded for years with people attached to their devices during dinner parties, driving and yes, even at funerals, there is a new level of coarseness that one must contend with. While the selfie institutionalized digital narcissism, the wealfie is used as a weapon; a way to convey crass materialism and lord one’s social standing over others.

Does anyone really care about someone else’s children? Hear ye, hear ye, the answer is a resounding NO. Unless I have seen your offspring grow up and I actually like them, no photos, please. And I certainly don’t want to see your teenage offspring in model pose being transported by Sherpas with name-brand luggage.

“I really don’t know what to say.” I turned to Dana after we were seated. “I would have thought that manners would have translated to technology but even (APB) is acting like a vulgarian.”

Les gens de finance aren’t exactly known for their witty or stimulating repartee, but there I was at a cocktail party in the impressive limestone maison de équité privé, trying not to bump into the conceptual art, which oddly seemed to be installed in the stately home’s most highly trafficked areas. Why not just move the soup cans out of harms way? Sérieusement!

Someone, who was consuming Avión tequila at an alarming rate, was leaning against a rare canvas of an abstract artist one only sees in museums when I was approached by the host. He introduced me to the imbibing Master of the Universe, George (not his real name) who was eager to make my acquaintance.

“Oh, you’re the ad guy that writes those columns. My wife hates you. In fact she told me if I ever run into you to tell you that you shouldn’t be writing about us,” he said matter-of-factly.

He mentioned the familiar name of an imperious woman I often see berating waiters in tony restaurants.

“I was raised that if you don’t have anything pleasant to say don’t say anything at all.”

“I think we are going to be friends,” he laughed. “I agree with you by the way. I’m like one of your articles where they stay together because of the money.”

To my host’s credit, he picked up on my discomfort and tried to broker a change of subject.

“You should see George’s (not his real name) new apartment on the 150th floor (not real floor) of the newest building on 57th Street (not real address).

“Here,” George said, taking out his iPad to show me what $85 million buys. “Let me show you the view.” The ultimate WEALFIE.

“It comes with this kitchen,” he said. “But we’re ripping the WHOLE THING OUT,” he said as he scrolled through half a dozen photos faster than you can say nouveau riche.

“I feel like we just had an intimate moment and I just met you,” I said coyly.

“Well, are you going to show me a compromising photo of your wife or your balance sheet next?”

“I like you,” he laughed. “I think we’re going to be friends. Let’s make dinner plans.”

“Well, it will be hard to make dinner plans if your wife hates me.”

“Listen, it was nice meeting you and seeing your assets,” I said, jumping over the metal floor sculpture in  a dash to escape the situation.

“It’s the new show-and-tell, with an emphasis on the show,” the LA-based power agent said over dinner at Le Cirque. (Is there a better Dover sole and French fries in New York, I ask?)

“If you’re sitting in the front row during Paris Fashion Week you would absolutely take, as you say, a wealfie, and when you get back to NY you casually show it to your girlfriend and everyone knows where your seat was. It’s digital bragging rights.”

“Sounds like a lot of work.” I was addicted to the fries and started searching for more before I caved and put in for a second order.

“It actually isn’t. I see it in LA all the time. So and so is at a party and they take a wealfie next to a star at someone’s dinner party and then it’s shown discreetly to friends. A wealfie tells a million words about who they are and who their social circle is. I guess you can call it personal PR.”

“I just find the whole thing incredibly annoying,” I admitted.

“It’s supposed to be annoying,” he said. “They show you wealfies because they want the other person to feel less than.”

“You know you could be a psychotherapist.” I was impressed.

“I already am. But in LA we’re called agents.”

IT HAS BEEN MY EXPERIENCE THAT DIVORCED MEN either get remarried immediately to whoever will sleep with them or they go through what I call a grazing period. I was at a business meeting at the downtown outpost of Cipriani with two other married gentlemen when a recently divorced businessman who joined us whipped out his iPad with the artichoke and avocado and parmigiana entree.

First came the wealfies of mansions, Bentleys, polo and five-star resorts. Next, the model girlfriends.

“She’s 5-foot-11 and Norwegian,” he said pulling up a lingerie shot. “I see her when I’m in LA.” He shrugged as the married men salivated. “This is my NY squeeze.” He pulled up a photo of a blonde hyper-supermodel in a swimsuit.

“I promise you it’s all real. Every inch,” he smirked, showing the table his conquests.

“Well congratulations on all the fun you’re having,” I offered.

“Well I do also want to meet someone, so if anyone knows anyone let me know.”

“You just showed us four models. Isn’t that enough?” I asked.

“Of course. But I also need someone I can have a conversation with. I don’t speak supermodel,” he said.

“I think this falls into the ‘uptown problem category,’ Ned (not his real name). I don’t think anyone is crying for you.” I laughed.

“I know,” he said, scrolling  away. “I’ll just have to suffer through it.” He sighed.

I WAS EXTREMELY HAPPILY BIDING MY TIME, ALONE, thank you very much, watching one of my children at a sporting event when a fellow parent (from another school) plopped himself down and started talking to me despite the fact that I was clearly ensconced in Barron’s.

“How was your summer?” he asked.

“Interesting. I had a very Unhamptons summer,” I offered.

“So I see you read my columns.”

“How was yours?” I asked, not really interested in the answer but trying to be polite.

“Here,” he took out his iPad. “We were in Greece. I rented this yacht.” He showed me the 150-footer. “The best crew I ever had. Then we sailed to Istanbul. We stayed at the Four Seasons. Check out the view of the Bosphorus from my suite. Then we flew to Venice. I had a craving for pasta.” He showed me a photo of the bowl of penne.

Thankfully the whistle blew and I collected my child, said my goodbyes and called my lawyer from the car.

“Let’s trademark the term wealfie,” I said, then called someone who works for me to take out the URLS for wealfie.com and wealfie.net. “If I’m going to have to put up with this kind of behavior, I might as well own it.” 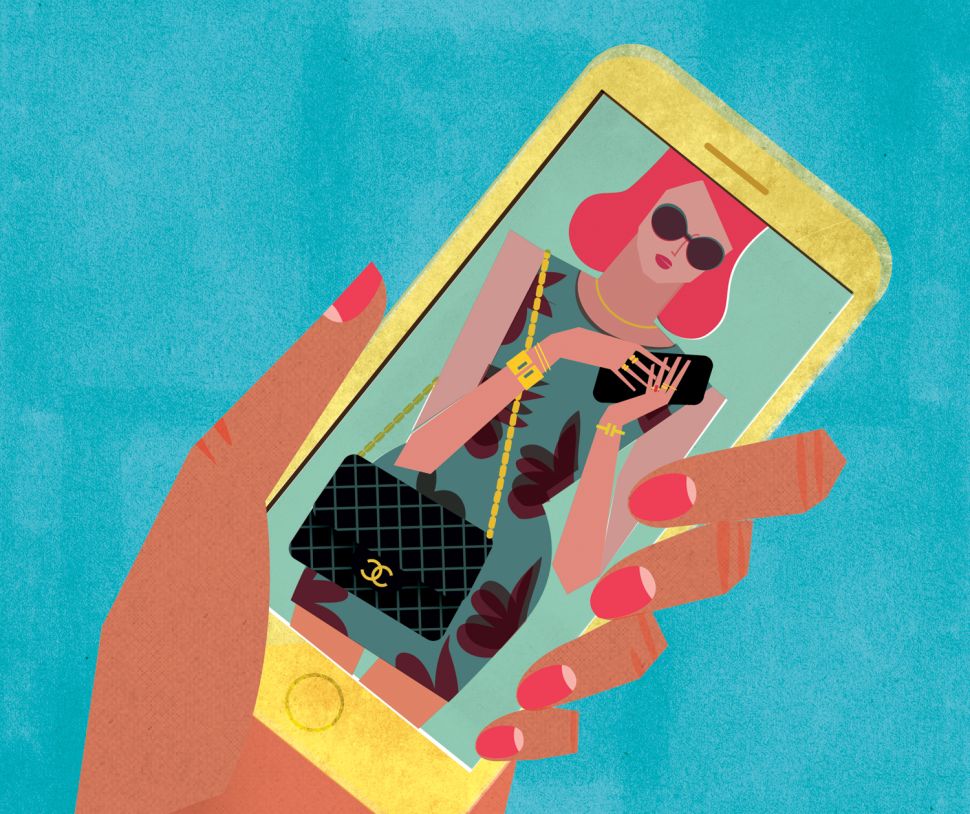