“I don’t have any emotional reaction to Saturday Night at all — except fondness. It’s not bad stuff for a 23-year-old. There are some things that embarrass me so much in the lyrics — the missed accents, the obvious jokes. But I decided, Leave it. It’s my baby pictures. You don’t touch up a baby picture — you’re a baby!”

So said the don of musical theatre composers, Stephen Sondheim, in 2000 in an interview with the Times’ Frank Rich, on the subject of his first musical. Now Sondheim, who will turn 85 next March, is busy with events and the publicity machine for the Disney film adaptation of his musical Into the Woods, starring Meryl Streep and Johnny Depp and which opens Christmas Day.

In a curtain speech before the opening night performance, also Sunday evening, York’s Artistic Director, James Morgan, reported that Sondheim, who attended the dress rehearsal, was “very pleased” with the performances of the mostly young cast of his young musical, which, you’re are correct, Mr. Sondheim, doesn’t prompt much more emotionally than fondness and nostalgia.

The story of an ambitious and ebullient crew of Brooklyn pals in 1929, Saturday Night focuses its attention on the romantic and professional aspirations of Gene (a pleasant Ben Fankhauser) who dressing up in top hat and tails to crash society events in Manhattan on Saturday nights.

Of course, he “meets cute” with another pretender, Helen, (a sincere and clear-toned Margo Seibert) who introduces herself as “Helene” supposedly of the aristocratic Southern “Calhoun” clan. They quickly doff their pretended identities, but Gene keeps pushing the envelope of his get-rich-quick scheme as the organizer of a syndicate of his pals who’ve polled their meager earnings hoping to hit big on the stock market.

For devotees of Sondheim’s sophisticate and often cynical later musicals, Saturday Night is mostly enjoyable as a window in the composer’s development, as a time capsule, and a chance for talented young performers, (like chipper Andrew Keenan-Bolger pulling a pretty decent Bowery Boys accent), to show their stuff. 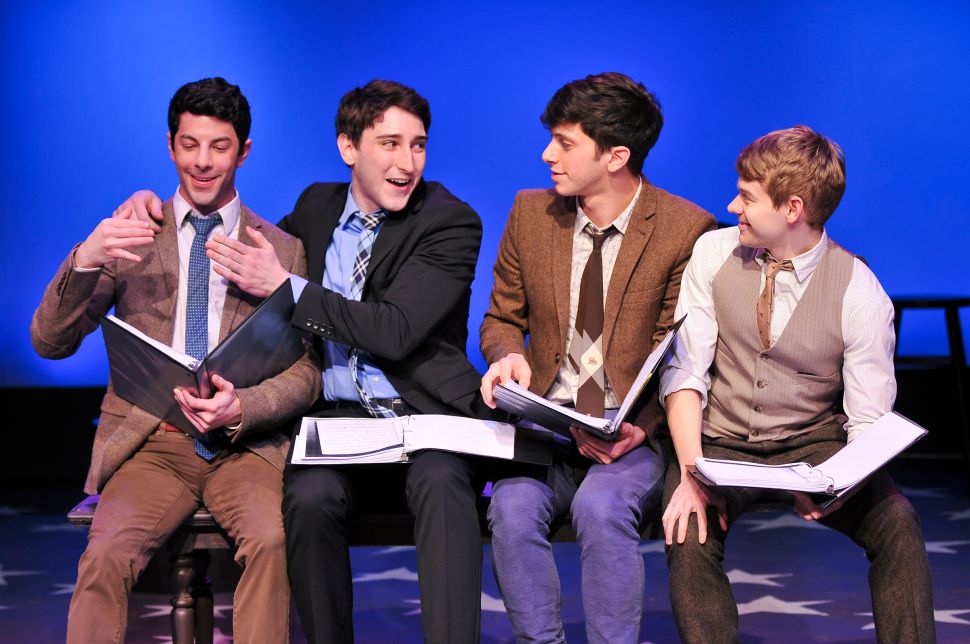