In a classic Curb Your Enthusiasm episode, Larry David struts into a museum cocktail party and points with pride to his name in silver on a wall. “Never had a wing before,” Larry boasts to his wife Cheryl. His delight is short-lived.

Larry spots “Wing Donated By Anonymous” gleaming on a nearby wall. “Anonymous,” he grouses, “I’m not crazy about that. Now it just looks like I did mine for the credit as opposed to Mister Wonderful Anonymous.” In response, Cheryl shares a secret: Ted Danson quietly told her he is Anonymous but didn’t want any “fanfare.” That infuriates Larry. “Next time, I give money to anybody, it’ll be anonymous,” he vows. “And I’ll tell everybody.”

Gert Boyle, founder of Columbia Sportswear, probably did not pull a Danson. A Portland alt weekly recently outed her as the anonymous donor behind a $100 million gift to the Oregon Health & Science University. Ms. Boyle’s decision to give anonymously made sense; in 2011, she was a victim of a violent home invasion and has understandably tried to lower her public profile since.

Even in an era when many of us broadcast every detail of our lives on Facebook, some philanthropists prefer to stay out of the spotlight. Some are genuinely modest. Others hope to avoid being hit up by a cavalcade of development directors. Donors might want to protect family members from unwanted attention; a benefactor with a spouse suffering from, say Hepatitis C caused by shooting up heroin, might prefer to avoid headlines about a gift to researchers hunting for a cure.

Philanthropic secrecy has a long history. Seneca, the Roman philosopher, argued that anonymous giving freed the recipient from embarrassment and the burden of feeling any need to reciprocate. Dwight Burlingame, director of MA programs at Indiana University’s Lilly Family School of Philanthropy, points out that nameless generosity flourished in agrarian societies. “You put your excess grain into a barn and other people would take from it,” he said.

In Judeo-Christian traditions, philanthropy is driven by private, spiritual motives and the intangible reward of knowing you’ve done the right thing—something that paid off in the virtuosity stakes. When the 12th century Jewish scholar Maimonides created a charitable hierarchy, with eight levels of giving, he ranked anonymous donations second (topped only by gifts, loans, or employment that lift people from dependence).

In the U.S., philanthropic secrecy was once “the thing to do,” says fund-raising expert Robert Osborne. Some old money considered naming buildings tacky. Now, an estimated less than 1 percent of charitable gifts are anonymous, though research on the topic is admittedly limited. “If people prefer to keep their giving anonymous, they probably want to keep the reason why they want to be anonymous private, too,” explains Jen Shang, a professor of philanthropic psychology at the Plymouth Business School in Britain.

Perhaps the most prominent of New York’s anonymous donors was duty-free magnate Charles F. Feeney. Starting in 1982, Mr. Feeney covertly doled out billions through his foundation, The Atlantic Philanthropies. To maintain the foundation’s low profile, it was organized in Bermuda and it established subsidiary organizations around the world staffed with program officers, compliance managers, and operations teams who agreed to maintain silence about the foundation’s identity.

Mr. Feeney’s generosity became public knowledge in 1997, when The New York Times ran a story headlined, “He Gave Away $600 Million, and No One Knew.”

But altruism is not the only reason that pushes donors into hiding. Some want to fend off solicitations. “People just don’t want you calling them or tracking them down,” says Mr. Osborne. Some philanthropists seek secrecy to keep their family (including potential exes) from knowing the extent of their wealth.

In some circles, anonymous giving is starting to raise hackles. The concern is that the wealthy are using charitable vehicles—from trusts to donor-advised funds—to promote political or business agendas while remaining anonymous and benefiting from tax breaks.

Ray D. Madoff, a law professor at Boston College, offers a hypothetical scenario: if a donor in the 40 percent tax bracket gives $1 million to an organization that is promoting the idea that climate change is a myth, American taxpayers fork out $400,000 of this in the form of the donor’s tax deduction. “If it’s just somebody promoting their business interests,” wonders Ms. Madoff, “is that something we want to be subsidizing?”

Creating a system to distinguish between different types of gifts, allowing some to be anonymous but not others, would be tough. After all, to some, denying climate change threatens the planet—while to others, it protects America’s economic interests.

Then there is the concern that nonprofits accept anonymous gifts from unsavory sources. Yet Mr. Dale, now director of the National Center on Philanthropy and the Law at NYU law school, sees little evidence that nonprofits are worried. During the time the Atlantic Philanthropies was giving anonymously, only once, he recalls, did a nonprofit reject the money on the grounds that it couldn’t identify the source.

“They may worry, but they don’t worry enough not to take the money,” he says. So perhaps, as those in philanthropic circles often joke, the trouble with possibly tainted money from anonymous sources is that it’s just not “tainted enough.” n 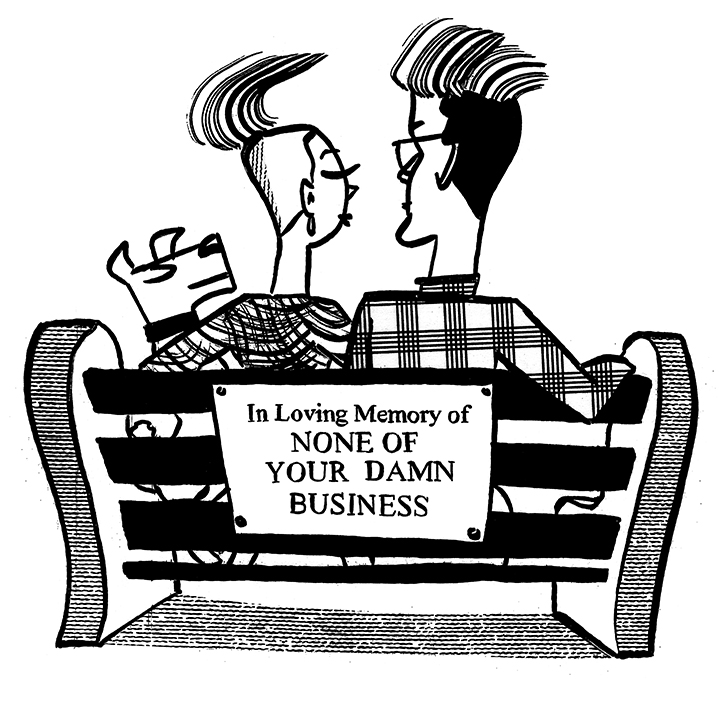