Looking ahead to tomorrow’s elections, state Sen. Bob Singer (R-30) said he’s confident the Republican ticket in Ocean County will win big — an outcome that has as much to do with the area’s demographics as it does with the fact that Democrats have few game-changing candidates or issues to offer this year.

It’s the natural result of a battleground where Republicans, with 53,492 registered to Democrats’ 39,619, dominate. Those numbers bode especially well for Tom MacArthur, the Republican candidate in the third congressional district, who Singer said faces little challenge in defeating his Democratic opponent from Burlington County, Freeholder Aimee Belgard.

While Belgard has put up a strong fight and was aided early on with support from national organizations like the Democratic Congressional Campaign Committee, Democrats are unlikely to see the kind of turnout needed in the Burlington County-half of the district to offset the strong Republican presence in Ocean, Singer said.

“I think that MacArthur is going to have a big win. You know, you have to look a the district. When Jim Saxton was there, he kind of went even in Burlington and really won it through Ocean anyway,” Singer said, referring to the Republican senator who won the seat in 1984.  “That’s not unfamiliar with the district.”

Singer, who lives in Lakewood, added that the prospects for Democratic candidates in the district were made worse in 2011, when the liberal bastion Cherry Hill was pulled out and more of Ocean County was added through redistricting.

Belgard will have to drive huge numbers out of Burlington in order to disrupt MacArthur’s advantage in Ocean, he said.

“Keep in mind one thing. When the district was Democratic, Cherry Hill was in it. That played a big role. Now you’ve got more of Ocean County in it, and Ocean County is strong Republican, so as long as you break even in Burlington you get swamped in Ocean,” Singer said. “So you’d have to come out of Burlington with huge numbers to try and offset the huge loss in Ocean. And Belgard is just not a big enough name.”

In the freeholder race in Ocean, where Republican incumbent Joe Vicari is looking to stake another term out on the board, Singer said the same holds true. Despite an energetic challenge by Democratic hopeful Tim Ryan — which has featured pointed allegations of criminal misconduct and rumors of FBI investigations against Vicari — the Democrat has hardly managed to dent the Republican’s image.

“I think the real key is, take a look at the Asbury Park Press,” Singer said, pointing to a recent endorsement of Vicari by the South Jersey paper. “They never endorse Republicans, they don’t have to. But even they couldn’t endorse Ryan.”

“In due deference to Ryan, it’s not like he’s been the mayor of a large town, or he’s been around long — he’s run a couple of times, and his name is on funeral homes,” he added. “But other than that, there’s nothing that tells people, ‘oh, I’ve got to go out and vote for Timmy Ryan.”

For Singer, there simply isn’t reason enough for Republicans in the county to vote against their party — as there sometimes has been in years past.

“There’s nothing on the ballot that brings people off the Republican line. There’s nothing of any strong consequence,” Singer said, noting that even the U.S. Senate race between Cory Booker and Jeff Bell is likely to have little effect on these down-ballot races, since the likelihood of a Booker victory is so sure. “And you know, it’s not going to be a huge turnout, the top of the ticket is Senate, there’s really been no race.”

“I mean is Cory Booker going to win? Yes he’s going to win,” he added. “But there’s been no race. And he hasn’t even spent anything. So there’s not going to be a huge turnout, and that bodes well for Republicans in the district, because they just are going to do well in Ocean County.”

Singer argued that while there have been strong Democratic contenders in years past that have bucked the trend, including John Russo, the former Senate President from Toms River, neither Belgard or Ryan are that type of candidate.

“In the bad years, when there’s been landslides, it’s been because the candidate is so lopsided or the economy is so lopsided — I think the last time there was this overwhelming landslide in Ocean County was probably the Florio landslide,” he said, referring to the former governor, Jim Florio. 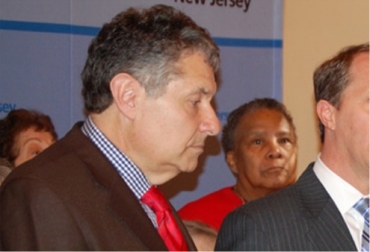