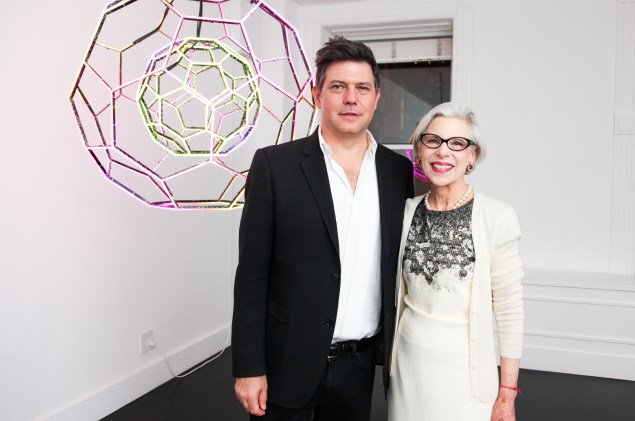 In scientific terms, a buckyball is a molecule resembling a soccer ball that represents a specific carbon form, C60. It was named after Buckminster Fuller. But the New York art world doesn’t care much for things in the scientific realm–that is, unless it can be made into to capital-A Art. And back in 2012, capital-A Artist Leo Villareal seemed to have consulted his old Intro to Chemistry notes for a work called Buckyball—he created a giant model of that very tiny but very essential atomic structure as a public installation in Madison Square Park. Made with hundreds of separate LED light segments that pulsated and changed colors, Buckyball had a memorably hypnotic effect on the passersby.

And, well, if something works well, or even just attracts a lot of attention (as big, flashy, pulsating light sculptures usually do), it’s probably best to make the exact same thing again and tweak it a bit so no one notices.

Last night, Villareal unveiled the second and third Buckyball sculptures in the edition of three at Sandra Gering Inc. on the Upper East Side. These were part of the indoor series, while the first was party of an outdoor series. And while these were smaller than the Madison Square Park rendition, they were at least a few times larger than their molecular counterparts.

“I like to work large, and also small—exploring scale, large and small,” Villareal said, explaining contrasts in size. The artist is probably best known for his decidedly large installation The Bay Lights, which comprises all of San Francisco’s Golden Gate Bridge.

Looming on the taller side, artist Richard Phillips swung by the opening as well. “When it was at Madison Square Park, my commute took me past the first Buckyball on a daily basis,” he said.

He took a step forward and inspected at the comparatively diminutive versions scaled for a gallery.

“It’s kind of a miracle to see how it works close up,” he mused. “It’s a very trippy feeling coming in from 63rd Street.”

Mr. Villareal, le artiste, do you approve of Mr. Phillips comparing your work to an acid trip?

“It’s immersive—something about it, it’s compelling,” he said. “Our brains can’t help but pattern recognize and look at it and engage.”

You know what’s another pattern we recognized, looked at, and engage? The pattern of watching a wine-tipsy crowd stumble over from an art opening to the gallery dinner. And so after looking at Buckyball, and perhaps tripping balls looking at Buckyball, everyone ended up next door at Amaranth. Upon entering, the first thing we saw was a vintage French poster illustrating eight stages of how to enjoy wine (“L’Art de Boire”) hanging inches away from an expansive Peter Beard collage. As evidenced by these sorts of things, though, no one needs instructions on how to drink wine. Everyone seems to be pretty good and glugging it down.

Case in point: Moments after a full champagne flute was firmly in our hands. And then we bumped into Anthony Haden-Guest, who could teach any younger reporter a thing or two about drinking wine. He’s a contributor to these pages, and once he knew which publication we were writing for, proffered helpful if unsolicited tips throughout the night. Taking a break from seeking quotes, we heaped food on our plates with one hand, flutes in the other. To our dismay, every seat in the house was taken. We earnestly approached empty spots, only to have a neighbor inform us time and time again that their companion was returning momentarily. Finally, we found a few in a row lined up against the wall, and sat down with our plates in our laps. “That was worth a paragraph, I think,” said Mr. Haden-Guest. (Was it, Anthony?)

Someone began clinking a glass frantically.

“Take off your shoes, and get on the chair!” shouted Mr. Villareal’s wife, Art Production Fund co-founder Yvonne Force Villareal, to Sandra Gering. She did, and the crowd applauded as they saw the petite gallerist rise up over their heads.

“I have to tell you a funny story: The first night they were in the gallery, I think they had a mind of their own,” she said, referring to the Buckyball globules. “My alarm went off at 4:00 a.m. in the gallery, so I had to come in! I told them ‘No more playing around at night.’ I do believe that they are alive.”

Gering first saw Buckyball when it was only a pile of tubes and LED lights slowly growing into geometric forms for the Madison Square Park installation. Like Mr. Phillips, she passed the park every day on the way to work.

Why recreate them on a smaller scale, in a gallery?

“I kind of have a dream, and Leo makes it happen,” she said. 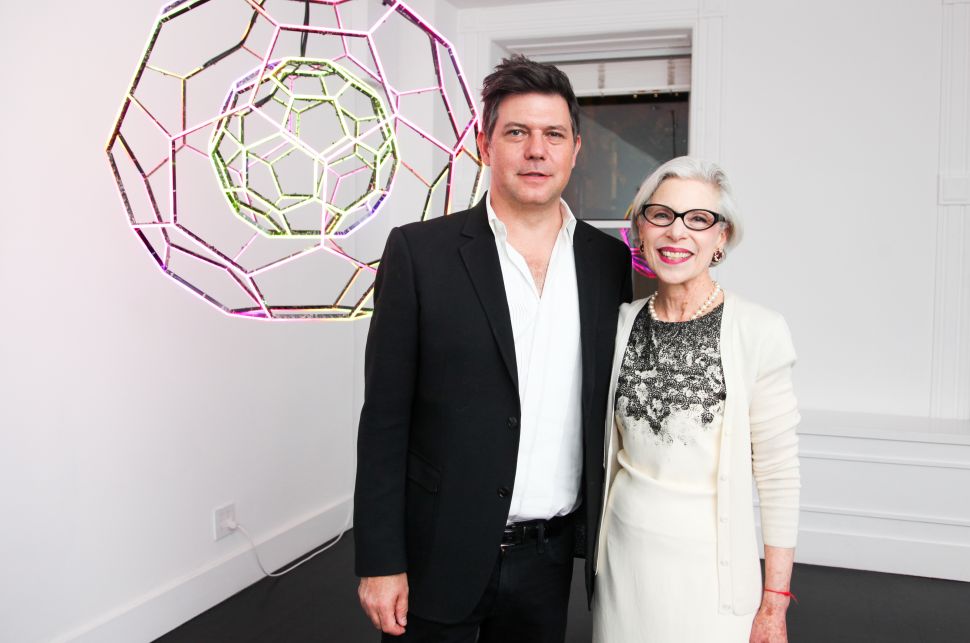