If you’ve purchased an LCD TV in recent years, chances are you’ve had that experience. It’s big, it’s shiny, it smells like fresh plastic, it is good, you are happy. Your hand stops shaking, if only for a moment. You turn it on. Something is wrong. Things are too clean, too sharp, somehow … uncomfortable. You recoil in fear from an actor you once loved, their once warm features rendered cold and unapproachable in the face of modern technology.

The reason for that is the smooth motion effect, and it’s the subject of a recent Change.org petition started by cinematographer Reed Morano to attempt to keep the fat-cats in various TV-producing locales from ruining her and other filmmakers’ original intent. Sign it if you care about anything.

A quick primer on smooth motion effect: the rate at which a TV refreshed its picture is measured in Hertz (Hz), and when people look at a new TV, they tend to smack the box with the back of their hand when confronted with a pleasingly large number, say 240.*

“That’s some good Hz!” you can say, change falling out of your pockets as store associates scramble to collect it, wife crying with neither tears nor sound, as she learned to do long ago.

The problem — an illiterate rabble (see: most directors for most of movie history) has always made actual content at frame rates that don’t even come close to taking advantage of the refresh rates available to modern  LCD televisions . Rare exceptions aside, film runs at 24 FPS, which is what most of us like just fine. A quick look at the critical reaction to Peter Jackson’s first Hobbit movie, filmed in 48 FPS, reminds us that it can be pretty jarring to see something filmed at a higher frame rate, and not in a good way.

This leaves TV makers with a dilemma: either stop upcharging for a higher refresh rate, or find some nonsensical way to justify the rivers of Hz. So the speedy little processors on board a modern TV can look at your old movies and guess what frames should go in between the real frames, and then cram them in there. In this way, they reduce motion blur and artificially inflate the frame rate to something like 30, 60, or even higher. TVs have always done a version of this, detailed here, but never in a way that actually attempted to make new frames.

Video tape is cheaper than film, even if it comes with a higher frame rate, which is why Soap Operas typically use video tape. Hence the nickname: “Soap Opera Effect.”

It looks terrible, but this is where the cognitive dissonance happens for technophiles and TV makers alike. When you look closely at the numbers 30 and 60, you’ll notice something right away: these numbers are bigger than 24. Both of them. You can even add “FPS” to the end of each number. It’s common knowledge that a short series of capital letters can go a long way to easing the endless pain that is existence. The hardware-obsessive can close his eyes and breathe a short sigh of relief. Time marches on, human society advances. Someday he will strike as high at 120 FPS, but today, he shall rest.

The rest of us get uncomfortable when those numbers go up for no reason. The thing about smooth motion effect and high frame rates in general, is that they tend to make the thing you’re watching look a lot more like what it actually is. In the case of, say, a football game, it’s guys running around on a field and the frame rate stays true to that. Same goes for, say, the news — somebody sitting at a desk and reading off of a screen. Sure, fine, no problem. It’s fiction where you start to see a problem. Again, it looks a whole lot more like the thing it actually is: a bunch of actors standing around on a set. This is a bad thing: we’ve lost our internal markers for what fiction should look like, as well as the original intent of whoever it is made that movie. And we’re creeped out as a result.

Luckily, smooth motion effect can be easily disabled on most TVs by a simple trip into the video settings. But I’ve seen too many people struggling through altered content to think that this is an appropriate fix, and others that seem to think it’s almost sacrilegious to deliberately downgrade. So too many just find themselves feeling uncomfortable when watching their favorite movies but not understanding why.

I have made it my mission to inform people of these, and their, failings: surprisingly, I am not always showered with praise for this.

This is why we have change.org. Fight the the power, preserve artistic intent. Sign the petition–now nearly 7,000 strong–to get TV makers to stop making smooth motion the default setting for new TVs. 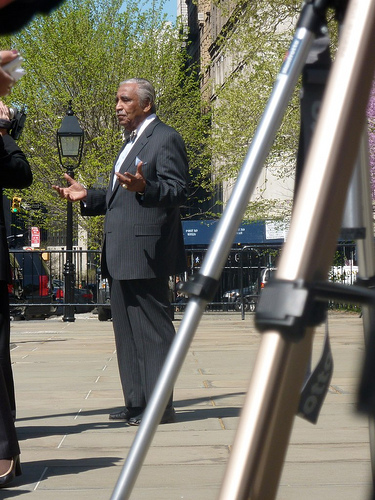