What in the everloving shit is going on with this show, man?

There is just so much to discuss, but I want to start with what I found to be the most important part of the episode — Oscar Hodges. While the Lobster Roll owner might not have seemed like the most important — maybe like fourth behind Scotty’s death reveal and Noah’s runaway plans and even his slut-shaming daughter — but Oscar Hodges provided something this episode that we literally have not seen yet on this show. He did the impossible. He connected the two stories being told by Alison and Noah.

A couple weeks back I talked about how NOTHING matches up between the two memories, meaning NOTHING could be true. Like even the wallpaper was changing around. But in walks big douchey Oscar this week, weaving in and out of both Noah and Alison’s memory in a consistent way. He casually asks Alison if she’s still watching that house, and by casually I mean sketchily. We then learn (in a first time approach, Noah’s memory comes second), that Oscar bumped into Noah out by the house Alison is watching, prompting suspicion. Really, it’s not much, but its there and for once there is something consistent between the two stories.

So, Random, Outlandish The Affair Theory of The Week: Oscar Hodges is the constant. Surely I don’t mean the time travel theory from that episode of Lost with the really touching ending that I always seem to watch while chopping onions OH WAIT that’s exactly what I mean. On Lost the “constant” is something familiar that someone traveling through two times needs to latch on to, or else they die of nosebleeds or something. I know you’re probably like “enough with the time-travelly multiple dimension theories” but every other theory I got is being shot to shit every week except, miraculously, this one. And, hey, the show brought it up first.

An aside: Do I actually think Damon Lindelof is secretly producing The Affair and the show is about to go off the rails into some sci-fi babbling? No, not entirely (maybe). But when was the last time we had a show where we could come up with actual theories, and not just sit there watching it while accepting the glumness of it all. The Affair isn’t a fun show, but boy is it fun.

So Oscar “The Constant” Hodges™ aside, what was obviously differing between Alison and Noah’s retellings? I think my favorite had to have been that first meet-up in the house Alison is watching. In Alison’s memory, she puts on a jaunty little tune (“Only Love” by Ken Roberts, if anyone’s wondering) before playfully pulling Noah into the bedroom wear he goes down on her until she orgasms. Like, can you imagine her telling that to the detective? “No, no he was down there for like 45 minutes. It was awesome.” Then in Noah’s memory there’s no music, only the sound of Noah grunting  caveman-like “we need to fuck NOW because the woman I married wants bagels!” Besides being hilarious (at least to me) this difference is telling because really for the first time this week, Alison’s memory was much happier and light than Noah’s, as if she really did give in completely at the end of last week’s episode, while Noah took a step back.

Until of course, the end of this week’s episode. While having sex pretty much identical to the sex we saw Cole and Alison having in the first episode (intewesting), Noah asks Alison if she wants to run away with him. This comes after basic family meltdown hour in Noah’s memory. His daughter pushed a girl to attempt suicide with a mocking fake Twitter account, which led to more boundary issues with his in-laws, which led to a huge blow-off with his wife. Plus, his youngest son was being at total cock-block  earlier in the episode. Let your father go on a jog with his car to get bagels for 2 hours now, son. Still, this won’t lead anywhere good. But could it lead to murder?!

Because, well, Scotty’s dead. Noah, we now know, was being questioned for Scotty’s death. Scotty was on his way to “The End” (iroooony) when he was apparently run down by…someone. Noah looks especially suspicious because he insists on saying “What makes you so sure it wasn’t an accident?” Which, Noah, is the sketchiest shit you can say to a detective that JUST LET YOU GO.

Meanwhile, in present (?) day Alison time, the detective asks her a bunch of stuff about Scotty, too. He asks if Scotty was acting weird “at the wedding.” But Alison replies “we left first.” Who is we? Well, whoever “we” is, they drove back to the city after whatever wedding was happening. Which you’d think would imply Alison and Noah are together in that timeline, and live in New York, which isn’t exactly far enough to consider “running away.” Also, the detective to Alison: “So Oscar had a relationship with the victim?” Would it KILL you, detective, to use more than one proper noun in a sentence.

So, in summation, Scotty is caput, at least at the time of Noah’s interrogation. Someone else is a victim in Alison’s timeline, but they don’t get a name. There’s a wedding, the night of which some serious shit goes down. Alison left before Scotty, who may or may not have been acting strangely, to drive back home to the city with someone (probs Noah, but maybs not). Did Noah murder Scotty? Did Scotty murder someone else? Did Scotty know about Alison and Noah’s affair?! Well, definitely not that. Scotty doesn’t know anything.

Until next week, I’d love to hear your Affair theories — time-travel included. 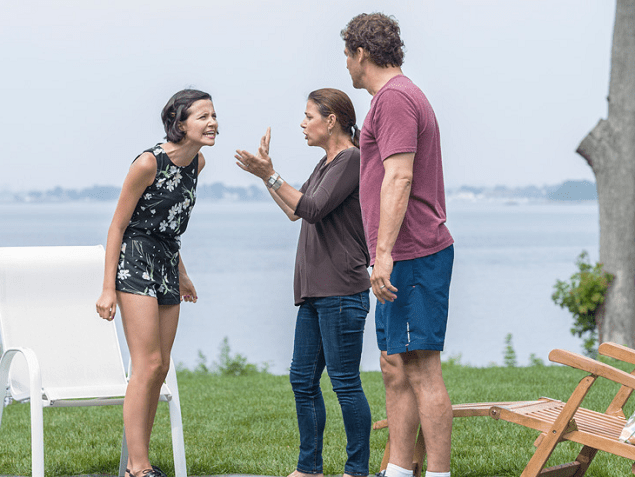 Filed Under: TV, The Affair, ,