Soooo let me get something straight. Last week, both Noah and Alison were released by Detective Vague questions, and both are no longer taking part in any interview. So why are we even still seeing this story, and why are both sides still so radically different? Did the writers come up with the “murder investigation” concept then get bored with it seven episodes in, and now Noah and Alison are just sitting in separate rooms alone relaying the story of how they danced the night away to Earth Wind and Fire to a wall?

Because without the investigation part it’s not even a he said/she said story anymore. It’s just a “well somebody’s obviously remembering this story wrong” story. And that’s not what I came here for, The Affair!

What I came here for is Noah remembering all the times he was terrible terrible terrible at keeping his affair secret, and this episode luckily had that in spades. You know how you don’t keep your affair secret? You dance wildly and we’re-obviously-having-sex-ily with your secret lover in a super crowded nightclub in the town where your secret lover’s entire family lives. I don’t care about everyone’s (super obnoxious) attitude that only outsiders go to “The End,” that in no way means you are safe to just dance all willy nilly outside the bonds of holy matrimony, I don’t care how infectious September is.

And heeey, want to hear another horrible idea? How about you keep bringing your entire family, kids wife the whole deal, to the restaurant where the woman you’re sleeping with on the side is a waitress. How good could the Lobster Roll be?! Oh, that’s not stupid enough for you? Then how about you attempt a quickie in the bathroom next door to your daughter? If Noah really is remembering this correctly, I won’t feel even a little bad when the truth about the affair inevitably comes out, because everyone should have figured that out ages ago (at least ages before big douchey Oscar stuck his big douchey face in everyone’s business and figured it out this week. Ruh roh.)

Speaking of finding obvious things out, hey look Alison’s a coke dealer. Here I was thinking she was just the friendly local fish-on-a-bike woman, like I remember from my youth. Just kidding, everyone knew Alison was a drug dealer except Noah. But this week Detective Noah was on the case, deciding that Alison going the wrong way down a road on her bicycle was enough to warrant following her like a fucking creep (following her, I might add, about ten yards down the road.) By process of stalk-ination, Noah finds out the truth about Alison. Well that, and Oscar rats to both Noah and the cops (maybe) the shocking truth about the Lockhart ranch — it’s just a front. Which is devastating news for anyone that thinks a horse ranch on Montauk could support itself in 2014.

So off Noah goes to confront Alison and let her know that big douchey Oscar is now big narc-y Oscar, and her family needs to bury ALL the coke. In Noah’s memory he runs straight to the ranch to tell her, in Alison’s memory he does it at the house which is a detail I just…I just can’t see how that would matter at all.

Apparently, finding out his  concubine is committing felonies gets Noah in the mood for sex with his wife something fierce. His memory ends with him coming home and sex-tacking his wife with the in-laws and kids at home and everything. They whisper “I miss you” the whole time and Noah cries a little. Tearful, regret-filled sex is better than no sex though, right?

Funny enough, Alison’s memory ends with her coming to the Butler’s house (to drop off Martin Solloway, Montauk’s worst horse caretaker) to apologize for, uh, being a coke dealer? She tells Noah she wants out of that life, and wants to start over with him. Noah, who is cool with having an affair but NOT COOL with drug dealing basically cuts off the whole thing with Alison. I like to think he went straight upstairs and that’s when he tore into his wife, because, well, that’d be sadly awesome.

In lieu of a Random, Outlandish The Affair Theory of The Week — because all I’ve got this week is Noah is an alien (hey, they said it), and there’s not much evidence of that besides Dominic West’s goblin face — let’s take a look at some lines that are probably foreshadowing. 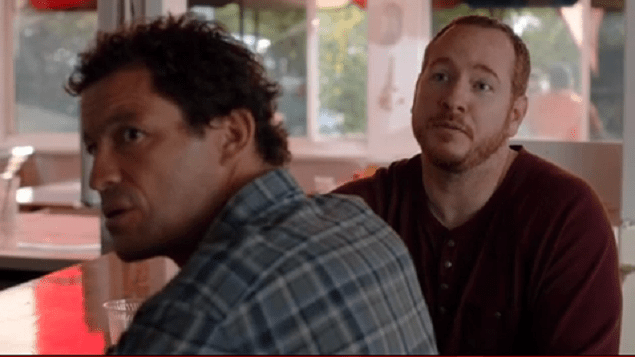