So every week right here on tvDownload I do the whole Affair theory thing, and there’s been one Affair theory floating around that I’ve been purposely avoiding because it would be so…just so dumb. So dumb. But here we go.

Random, Outlandish The Affair Theory of The Week:  Some, if not all, of one of the point of views is actually just plot points from Noah’s second book.

Right? Like, fuck that. That’s downright Lindelofian™. But here we are, with a random shot of Detective Vague Questions reading Noah’s book. 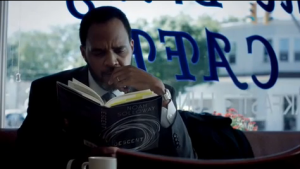 If you look real closely, you can see he has multiple passages marked off with yellow notes. And then, after this shot, BAM BOOM plot twists for the rest of the first half of the episode, all of which paint Noah as a pretty horrible person. Then, in Part Two we have Det. VQ specifically go to The End and asking about Noah. And I can’t even help thinking that the name THE END itself is a foreshadowing punch right in the face that half this story is from the book.

So what scenes in Noah’s book would the Detective have marked off, judging by this episode? Well:

So the Detective, taking all this as possibly a thinly veiled account of what actually happened gets a picture of Noah as a horrible liar with a silver tongue, that also has reason to hate both the Lockharts and the Hodges. Do I think a real life detective would use an author’s book as stone cold evidence against them? No. But this is Showtime, baby, this is The Affair.

Because then the Detective shows up again in Alison’s portion of the episode, and for the sake of this theory lets pretend all the Detective stuff and Alison’s memory is the stuff in reality (Noah’s portion is his own book. Try and keep up.) Armed with the knowledge from Noah’s book that Noah is a shady individual, he goes to The End to inquire whether there’s any record of Noah. But there isn’t. Because Noah might be a dick, he might be untrustworthy and he might be totally okay with cheating on his wife but in reality, he is not a criminal.

And with that, I have never wanted to have wasted 600 words more in my life.

Let’s check in on Alison’s world, huh? Cole’s mom finds out about the affair because, I reiterate for the 1000th time, Noah is an IDIOT and leaves an incriminating letter in Alison’s bike basket where anyone including, I don’t know, the wind could have taken it away. But Cole’s mom is the matriarch of a family drug ring so she’s generally pretty good at looking the other way. She burns the note. End of story.

Except it isn’t. Cole and the Lockharts go to make amends with Oscar, and everything goes well until Scotty just has to punch Oscar in the stomach. Oh, Scotty. Scotty hasn’t messed up this bad since he tried to bone Noah’s sixteen year old daughter back in like episode two. Anyone remember that? That’s the real affair here (Random Outlandish Theory…) Anyway Oscar is understandably perturbed and tells Cole Alison is sleeping with…someone. Oscar gets his ass kicked for his troubles but the damage has been done.

Cole…is pretty cool about the whole thing. Alison still thinks she needs a mini vacay after all this stress, so she heads to New York to get high and skulk around Helen’s shop. Only one of those things is a good idea. Eventually, Cole shows up in New York because ALL the cocaine is gone.

It’s cool though. Cole’s brother (not Scotty. The other one) just thought major cocaine dealers have a return policy on the coke they sell you. They don’t. They usually just beat you into a coma. Remember that, folks, the holidays are coming up.

Anyway, all this touching, drug-related family sentiment has Cole finally accepting that they need to sell the ranch (DUH, ya doofus) and to say to Alison, “let’s make a baby.” Alison turns off the lights so they can commence making said baby. 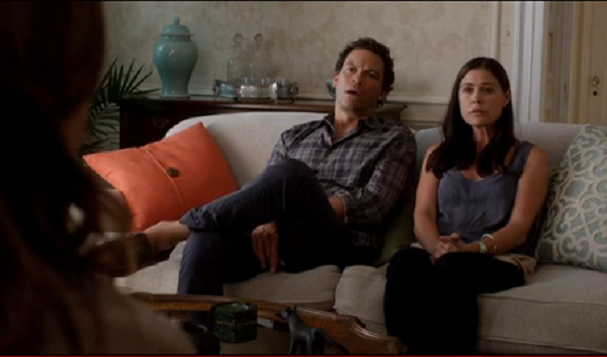