Independent Projects, the second art fair by the folks who brought us Independent, is a little bit of a new kind of beast. But it’s also not a total departure from its March sibling. Whether you choose to call it an art fair or not, it is one.

The fair is being held inside the former Dia Foundation building on West 22nd Street in Chelsea (where the March edition is also held) the fair runs from November 7 to 9, and then, in a bold move, will clear out dealers and reopen as an exhibition-only event from November 10 through 15. It features a small but hearty mix of emerging and younger galleries alongside behemoths like David Zwirner and Gagosian. It’s a strategic mix dreamed up by its director Laura Mitterand and creative director Matthew Higgs, along with founders Elizabeth Dee and Darren Flook, with the goal of turning the traditional fair model on its head, and the focus toward the artists. And one last kicker: it’s all solo booths.

“Most of our pieces sold within the first ten minutes,” White Columns deputy director and curator Erin Somerville told the Observer, when we dropped by the non-profit’s single wall exhibit.

She was speaking about June Hamper’s charming untitled ceramic cats and other assorted animal ceramic works. Most were priced at $1,500, the lowest price a small pot for $750 (affordable art among giants!), and stylistically reminiscent to Egyptian Canopic jars. Ms. Hamper happens to be artist Billy Childish’s mother, and while her work hasn’t been shown widely— that was part of the incentive to show her here according to Ms. Somerville and Independent Projects creative advisor Matthew Higgs—the cats have appeared at the Sunday Art Fair and were featured in White Columns’ “The Cat Show.” They were originally produced for the artist’s home garden.

Another important fact was that Ms. Hamper is self-taught, ostensibly she could classify as an outsider artist. At 84-years-old she was not alone in that category.

On the other side of the exhibition wall at Andrew Edlin Gallery, who specializes in outsider art, were a series of works by Thornton Dial, some of which made the journey from Atlanta for the fair even though they weren’t for sale. The Blood of Hard Times (2004), a large red and black painting comprised of corrugated tin, metal, clothes, and other industrial materials, was, however, for sale at $350,000.

“We’re excited to show outsider art in dialogue with everything else,” said gallery director Rebecca Hoffman.

She, like many dealers the Observer spoke with, seemed uncharacteristically relaxed for the fair’s preview day.

“I think everyone is just confident in what they’re showing,” she said—confidently.

And they should be. The format made a majority of the “booths” look great, thankfully free of the boxy white walls that make most fairs look the same. But the March edition of Independent is already known for its free form set-up. So what’s really that different here?

Well, a lack of wall labels for one thing. There were few in sight. Even the gallery names were hard to spot, subtlety printed in vinyl in the uppermost corner or sides of each wall. A gallery employee for Hannah Hoffman told us, with little alarm, “People don’t really know what’s going on, or where to look. But the set-up is nicer for visitors.”

It’s nicer for dealers too. Since not everything is for sale—and a lot isn’t—the pressure to empty the booth isn’t looming. It’s the only art fair in town this week, and while the auctions are creating their own buzz, the price point for works at Independent, compounded with the fact that many of the artists shown have never been sold at auction—and likely won’t be in the near future—doesn’t make them a competitor. Rather, she and nearly everyone else we checked in with, was just really chill. Hey, the big collectors are in town for the sales and strolling in to check things out, who can complain?

But where was the frantic energy we’ve become accustomed to? Most fair-savvy art worlders build up stamina for the annual events akin to that of seasoned stockbrokers used to the rush of the trading floor. Even the volume of voices was an octave lower than most fairs. The only frenzy to be found was at Dominique Lévy’s participatory tribute to Yves Klein. Cries of “It’s so gross!” echoed from the small, dark room on the third floor where Sculpture tactile (a work conceived by Klein in 1957 but never realized) was being shown.

Floating between walls, we heard frequent use of the word “booth” to describe the designated gallery spaces. It was a term we thought might be taboo at the newest iteration of a fair. But old habits die hard, and while it may have a different look, and a slimmer profile (all single artist shows) this is still a place for commerce. The Rubells were on hand, both Don and Mera, and a number of gallerists not exhibiting like Bill Powers of Half Gallery and Salon94’s Jeanne Greenberg Rohatyn were checking in with their peers.

After salivating a little over the Ms. Hamper’s cats (we wouldn’t mind taking one of those home), and getting no where with the baby dealers Gagosian sent to man their booth (no one seemed to known very much about the artist the late comer, blue-chip titan had brought) we ran into Independent co-founder Mr. Flook.

“It’s a beautiful building, I just wanted to put some beautiful art in it, and not fuck with it too much,” he told us. “If I did, it would be just another trade fair.”

“But, it’s still a fair, right?” We said, since we couldn’t help throwing it back in his court.

“To be something different, it has to engage with culture. This [Independent Projects] is really about the artists,” he responded. “And you have to be willing to walk away. If it doesn’t work, we won’t do it again—but we hope it works.”

We think it does. And the feeling we got—that relaxed feeling—from dealers and other visitors, speaks to a modicum of success.

Art dealer Jay Gorney saw an opportunity with the alternative model Independent Projects presented since he is currently without a gallery space and flying solo. Going it alone here hasn’t seemed to hurt him one bit. He reported several works by Mathew Cerletty (priced between $25,000 and $30,000) on hold, and multiple sales at just an hour into the preview.

Also seeing early sales was Los Angeles outfit Kayne Griffin Corcoran, showing rare John Tweddle’s acquired from the Scull collection. The paintings were brightly colored, bold commentary on the art market, very appropriate for the un-buttoned fair, and were in pristine condition—having spent many years locked away in a vault in Europe. Produced during the artist’s most active years, 1966-72, the larger works fetched $80,000 each, while the small drawings were available for $9,000, and sold.

And works by 90-year-old Gianfranco Baruchello, shown by Milan gallery Massimo De Carlo, were selling fast too. Mon cher Ame (1964) sold for $30,000, and a stunning 1985 enamel-on-aluminum piece, Dillo tu, Casimir Severinovic, was on hold. A number of still active, older artists balanced out the young up-and-comers. Mr. Higg’s attempt at blurring the boundaries between big and small, and old and new worked out.

Overall, the fair was more than pleasant to walk through. The art work had breathing room, dealers weren’t pushy—far from it, we almost had a hard time spotting them—and while it may have been hard to keep track of where one show ended and another began, that was probably the best part. Getting lost in the mini shows. But next time, more wall labels, please. Minimal signage can be nice, but it’s still a must to have titles when work has them.

Independent Projects hasn’t changed the game, but it’s placed some more chips on the table.

Independent Projects is located at 548 West 22nd Street, New York. It will operate as an art fair from November 7 through 9, and as an exhibition November 10 through 15. 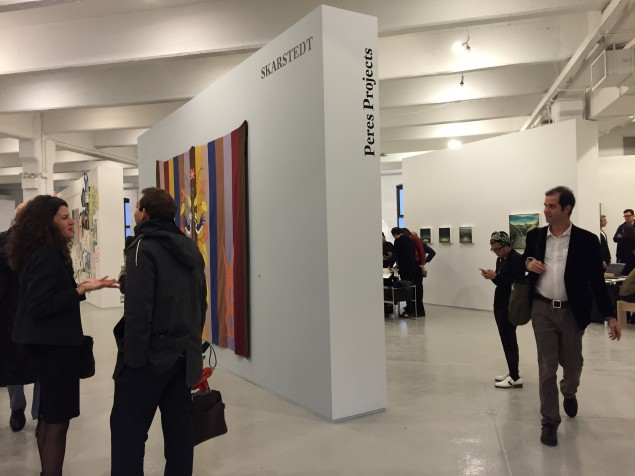