My skin is crawling and I’ve never felt more alive.

This, verbatim, was my reaction the first time I watched The Comeback just two short weeks ago. Actually, it followed an all-caps rant on my twitter feed to the effect of OH MY GOD WHY DID NONE OF YOU TELL ME TO WATCH THE COMEBACK BEFORE. A mockumentary in which the protagonist occasionally realizes the joke is on her and visibly chokes back tears? Where have you been all my life?

As the kind of person who could only like This Is Spinal Tap more if the “Stonehenge” sequence had been followed by an unbroken two-minute shot of David St. Hubbins having a backstage breakdown upon realizing his entire life was a miserable failure, this was manna from heaven for me. Its trick is that by forcing you to experience the humiliations of Valerie Cherish as genuinely humiliating, with all the barely tamped-down misery that entails, instead of just as joke fodder, the show is actually more empathetic to her suffering, and harsher on the sexist system of celebrity that inflicts it.

So you can keep your Liz Lemons and your Leslie Knopes and their adorkably heartwarming/heartwarmingly adorkable tumblr gifsets—I wear all black all the time, for god’s sake. Give me Valerie Cherish auditioning for a role designed to tear her to shreds because it’s the only role she can get. I want comedy that hurts. If it comes in a pastel track suit, so fucking be it. And from what I’ve managed to see so far (the three extant episodes of Season Two and about half of Season One, which I’m HBOGoing as fast as my internet service provider can handle it), few episodes of The Comeback have been quite this painful.

Though it doesn’t seem that way at first. “Valerie Is Brought to Her Knees” spends most of its time just doing the kind of thing cringe comedies about showbiz usually do. You’ve got bite-the-hand-that-feeds network satire: the Sopranos/Mad Men-style red-and-white-on-black logo for Valerie’s vehicle Seeing Red, complete with oh-so-sophisticated syringe full of heroin; Seth Rogen’s gratuitously pay-cable-disgusting improv, and the fact that everyone acts like it’s pure gold. You’ve got culture clashes between cast and crew, exacerbated by Valerie’s rustiness after a decade out of the game, not to mention her chronic narcissism; pity the line producer who has to tell her there’s no room in the budget for both a wig stylist and a wig-to-head assembly technician. You’ve got the tv “star”/movie star disconnect between Valerie and Rogen, from her try-hard friendliness when they meet to her exasperation when he’s given the freedom to riff while she’s reprimanded for mixing up “keep out” and “stay out.” And, of course, you’ve got blowjob jokes: “I haven’t done a sex scene since I made out with Alan Thicke in that Growing Pains flashback” gets my vote for line of the night in that arena.

Maybe it’s that extra decade talking, but this is a Valerie who’s a bit more openly sarcastic about her indignities than she was back in Season One. You’d have to be as oblivious as, well, Valerie often is to miss her annoyance when she gets her balls busted about going off-script. She’s even snarkier with the make-up guy whose arm full of bracelets rattle her brain: “Pretty beads. Wear them every day? Do you? Do you chant?” By the time she’s forced to stand stock still while two nude women unconvincingly fake orgasms on either side of her, she’s willing to call it like she sees it to Mickey afterwards: “That was hell. That’s where I was.”

For what it’s worth, which is probably not much, the auteur architect of her misery, Pauly G. is clearly dealing with insecurities of his own. (Few men who vape aren’t.) Rogen’s fake shock over Pauly’s lack of directorial experience leaves the showrunner visibly shaken, enough so that it’s safe to assume his irritation with Valerie’s requests for guidance stem at least in part from genuinely not knowing what the hell he’s doing. The one major directorial decision we do see him make, when he finally coaches Valerie and Rogen on the big blowjob fantasy scene, is an obvious creative misfire motivated solely by spite. Only Rogen’s genial personality and star power prevent Pauly from going forward with a pointlessly rough version of the scene that, in addition to being repulsive, makes no goddamn sense.

That’s where this episode really hurts: It shows that Valerie’s big triumph is anything but. By the end — by the time she’s spent an endless minute flanked by women with visible labia so that Pauly can indulge a fantasy at her expense, by the time she’s blurted out her inadvertent insight that Pauly hated her so much he’s trying to turn the fantasy sequence into a rape scene — Valerie’s starting to realize that the big-time future-Emmy-contender show she’s signed up for will be just as shitty to her as the sitcom it’s spoofing. Seth Rogen can ramble on about jizz in his eyehole while the camera rolls. Pauly G can write a terrible Three’s Company knockoff while high on heroin and still land an HBO development deal. But to get her comeback, Valerie Cherish has to kneel there with her head in a dude’s lap while he pretends to be serviced by her, as voices from off screen yell at her to keep her head lower, lower, lower. That’s The Comeback in an angry, funny, excruciating nutshell. Cherish it while you can. 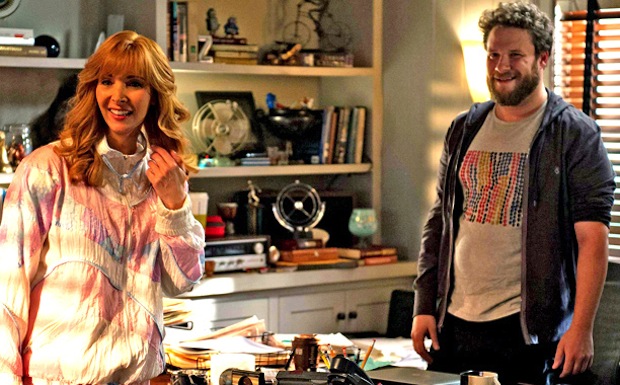