It’s common knowledge that the best funerals aren’t dreary—they’re giant, exuberant celebrations of life replete with music, friends, family, and beams of love shooting off in every direction. By that rubric, the final night of tiny, beloved and splendidly filthy Williamsburg DIY space Death By Audio, the latest holdout to fall to the neighborhood’s unfortunate gentrification, was the finest funeral I’ll ever have the pleasure of attending. And nobody even had to die—although, with the earsplitting bone saw of the speakers and the nonstop ingestion of booze and things harder and the constant crowd surfing with no concern for broken skulls, well, some certainly seemed to be trying.

I arrived late on Saturday to a clusterfuck of would-be showgoers, some of whom had been waiting in line since 5:00 p.m., or earlier. Those with deeper pockets tried to gain admittance by offering many times the cover price of $10, but for once in this town, that got them nowhere. About 80 bodies from the line were admitted, and the other 120 people who got in were members of the extended Death By Audio family. Press list? Not a chance.

Inside, people mingled and hugged, trying to drown their sorrows in a sea of friends and alcohol. The first band up was Grooms, whose wistfully noisy indie-pop felt appropriate.

“I know it’s the last night, but don’t tear shit down,” requested singer Travis Johnson. “We want this place to be beautiful when Edan closes the door.”

He was referring to the majestically bearded Edan Wilber, the DBA founder, who had donned a handmade T-shirt reading “START YOUR OWN FUCKING SHOW SPACE.”

Next, garage rock duo JEFF the Brotherhood got bodies in motion with their headbanging combo of classic punk and heavy metal (think Sabbath meets Ramones). The front 10 feet of the house became an gnarly pit of flying fists and spastic contorting bodies as the ceiling’s fluorescent lights stuttered and numerous crowd surfing virgins grew bold enough to try.

Despite the good cheer brought by each “whoa-oa-oa” sung by the adorable brothers, I began to catch a case of the weepies from my sensitive artist friends, so I popped a few, um … we’ll call them “fun pills.” I’d much rather feel twice as shitty tomorrow and not start a chain reaction of weeping today, I rationalized.

The special sparkles rising in my brain put me in a fine headspace to sing “Happy Birthday” to Oliver Ackermann of psych-gaze institution A Place To Bury Strangers, who accepted a cake before blasting us with endless layers of gorgeous, gauzy noise as the room filled with fog and frickin’ lazer beams.

“Are you O.K.?” asked my photographer, and I assured them that all was fine: I could no longer feel my feet and motherfucking Lightning Bolt was about to play.

Ever been in a mosh pit, dear reader? Ever been in a mosh pit after consuming highly potent empathogenic amphetamines? It’s probably the closest thing to unfuckwithable heaven—the collective catharsis of bodily contact overtaking petty concerns like “broken toes” and “liking your face just fine the way it is.”

As the post-nuclear noise tornado bass-and-drums of Lightning Bolt rained chaos down upon us, the crowd undulated as one, our faces plastered with beatific smiles. Then the pit expanded into a mosh room, and I glimpsed every messy part of human existence in strobe-lit freeze frames: a couple desperately making out, a sweaty bro hug, a girl in a banana costume going totally bonkers.

And then we raised our voices in a chant of “Edan! Edan!” as we lifted the god into a lengthy crowd surf during which he kissed the ceiling and clasped everyone’s hands in a gesture of gratitude.

But lest you think all was peace and love, Lightning Bolt drummer Brian Chippendale started chanting “hashtag fuck Vice!” and the whole crowd joined him in repeating the mantra. The sentiment was understandable, as it was Vice—the former iconoclastic publication that’s now a Rupert Murdoch-backed content mill valued at $2.5 billion—that bought the building that houses Death By Audio, thus ensuring that the landlord would not renew its lease. Someone produced a bunch of copies of the magazine, which the crowd tore up in a sweet, sweet fuck you to the newest face of The Man until it was snowing Vice confetti. Outside, some people burned copies, while others made Vice angels on the ground. One guy re-drew the “Fuck You, Shane” mural that had been painted over, probably by some of Vice founder Shane Smith’s goons that he could easily hire with all that venture capital money.

Eventually the party migrated to the apartment behind DBA, and at 6:00 a.m. everyone had taken their shirts off and were slow dancing to Seal’s “Kiss From A Rose” when the lights abruptly came on—several former employees of the recently departed venue 285 Kent had come busting in like the Kool-Aid man. They wanted to break back into their shuttered punk den, dormant for months as the neighborhood awaits the further incursion of corporate-backed brand influencers or whatever, but nobody had a crowbar, so it was off to a practice space to jam. Stumbling out the wrong door afterwards, we found ourselves trapped in the backyard of a closed bar, prompting 285’s handywoman emerita to MacGyver open the emergency exit using found objects. If that’s not a clear sign that DIY lives on, I’ll eat this copy of Vice. 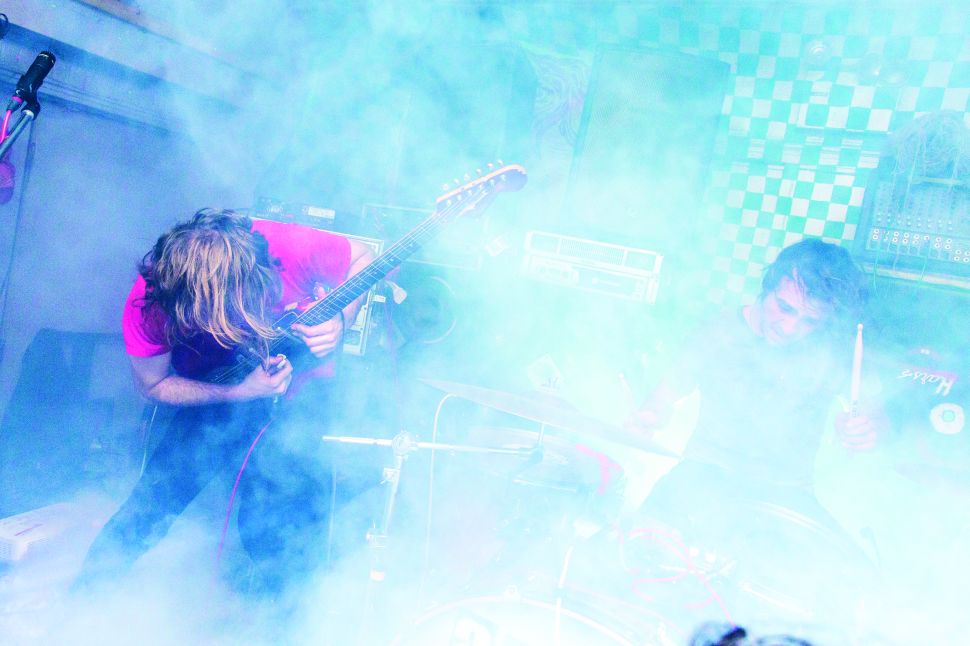