This episode was an absolute breath of fresh air after the tonally uneven, bizarre goings-on last week. There are two main storylines developing this season — Cary’s ongoing legal trouble and Alicia’s bid for State’s Attorney — and The Good Wife finally gave both of them their deserved real estate this week. And we got to see Alicia say “horseshit” on broadcast television. Win win.

Finn finds out that Cary was on administrative leave before he resigned from the State’s Attorney’s office. And the reason for his leave is because some evidence (read: blowcaine) from the Bishop case went missing. Finn runs to tell Alicia, because his growing boner for her won’t let him do much else, and when he gets to the bar, Alicia already has his drink waiting, which pleased me very much. He does Alicia a solid by telling her to distance herself from Cary. The crap’s about to hit the fan. And hit the fan it does, because Finn brings the missing coke before the judge as proof of other crimes. (Sidenote: That judge is really cranky. I guess I’d be cranky too, if they made me a judge and didn’t even give me a gavel or my own quiet judging room. I mean, how can anyone take the guy seriously if he has to resort to slamming his hand on the bench over and over to get people to shut up?)

Speaking of distance, Cary and Kalinda have to stay 30 feet away from each other at all times, which is a really convenient distance because it means they can still look at each other from across big enough rooms. Even though he’s being tried for a serious drug offense, Cary apparently doesn’t give a shit, because during critical testimony, he’s texting Kalinda with “I miss you” and Kalinda agrees, saying “We should be getting drunk and doing sex instead of all this boring court stuff.” Homegirl wants her mancake back. So much so that she’s willing to tell Diane that the real reason Cary took that blowcaine into his own custody was to impress Peter and help him nab Bishop. The whole attempt to drag Peter into the case ultimately fails, but it does provide some nice (and MUCH NEEDED) conflict in the Cary-Kalinda relationship. And let’s hope this really goes somewhere, because this is Archie Panjabi’s last season on the show, and we’re owed some big moves before she departs.

Kalinda digs and finds that the lab tech at the SA’s crime lab has a bunch of extra money in her bank account out of nowhere, and she confronts the woman, getting her to admit that she’s responsible for the drugs going missing. Yes, ladies and gentlemen, the lab tech’s cousin is none other than Trey Wagner, Lemond Bishop’s guy who ran off to escape Bishop’s wrath. But the lab tech won’t say anything else, so Kalinda just breaks into a car and downloads GPS data. This is bad-ass season 1 Kalinda sleuthing, and I’ve never been happier to hear the click-clack of boots in a parking garage. (‘Nother Sidenote: is it that easy to get GPS data out of someone’s car? I’m officially terrified by how easily Kalinda did all of that.)

Kalinda finds her way to Trey Wagner, who is living in unquestionably the best apartment building in all of Gary, Indiana, and actually gets him to come out of hiding and testify against Bishop. Finn brings this to Castro who, realizing that it’ll essentially exonerate Cary, is all “Gurl, bye,” and Finn realizes what the rest of us have known ever since Castro confronted Alicia in that musty hallway four episodes ago. This whole Bishop case is just about taking Alicia down. Finn calls Alicia and is all, “I quit. Let’s get drunk.” Did y’all catch that moment at the bar when Alicia asks when Finn resigned and he grabbed her hand to check the time on her watch? I am officially starting us on ‘shipper patrol for these two. I mean, it obviously can’t go anywhere significant, because she’s the governor’s wife and she’s running for public office, but if Finn really is going to rent out office space in Alicia’s building, the sexual tension is only going to escalate.

Anyway, Kalinda’s sleuthing is really all for naught, because Trey and his cousin die in a “car accident” before they can help Cary. So Kalinda’s attempts to help Cary have backfired and gotten actual people actually killed. We are now getting the memo loud and clear: Lemond Bishop is a honeybadger. Best to just move out of his way. Every time we go one step forward to free Cary, we go two steps back. As compelling as the back-and-forth has been in this story, I will say that when the day comes that this story wraps up, I will greet that day with a bit of relief. Unless Matt Czuchry knows something we don’t, Cary’s not going to be sentenced to federal prison.

Meanwhile, Peter does his best Bill Clinton on TV, and while watching, Eli smells blood when he sees a fellow political operative just hanging around the studio. Maybe the guy has a thing for David Hyde Pierce. Or maybe he’s bundling petitions to get David Hyde Pierce onto the ballot. Bad news for Alicia, because according to Johnny, if he gets in the race, Alicia will lose. So Alicia has to sniff out whether he’s running by asking for his endorsement. I’m rooting for Alicia, because duh, but is Alicia rooting for Alicia? Is this just naked ambition for its own sake, or does Alicia actually have a real burning desire to be Cook County State’s Attorney? I’m still not sure. But I guess that doesn’t matter anymore, because she’s already on the train.

Alicia goes into the meeting with Frank Prady (DHP’s character) prepared to give her own principled spiel about why she’s running and why she wants his endorsement, but about 20 seconds into it, she does exactly what Eli and Johnny tell her to, except she kinda screws it up. She comes out of that meeting with no endorsement, but with an interview booked. She rolls her eyes through all of Eli and Johnny’s advice, but deep down she knows that they’re right. Eli looks Alicia right in the face and says, “You’ve gotta get over your feeling that you’re above all this.” And he is totally dead-on. Alicia’s a fool if she thinks she’s going to be the first candidate in history to be immune to the inane personal questions and the unfair attacks and the shameless, well, politicking. Politics is a blood sport, Alicia, so lace up, cross your legs at the ankles, and get it done. This is what happens when you volunteer as tribute.

I found it fascinating that Frank’s first interview question to Alicia is about “how she finds the time.” Ah, yes, the old familiar question that is asked of every professional woman and of no professional man. I know you’re having fun out here in your skirt suit and your high heels, toots, but how does your hubby feel about it? Are you still getting that meatloaf hot on the plate by 6:30 every night? And the rest of the interview is all warm and fuzzy, throwing Alicia off so that she seems stiff and combative for no reason whatsoever. This is not by accident; Frank is running, which (luckily for us) means we’ll see more of David Hyde Pierce. Don’t get me wrong — he’s no Taye Diggs. But I suppose in the frozen tundra of Taye’s absence, Niles Crane is one small, albeit enjoyable, tuft of dewy grass.

Eli and Johnny want Alicia to get dirty to scare Frank out of the race, but Alicia draws a line and admits she’d rather lose than leak an incendiary paper Frank wrote in law school. Eli and Johnny shrug their shoulders and just decide to slide the paper to Castro, who jumps on it like catnip. Frank turns up at Alicia’s office to express his outrage at how personal the game of politics has become. His outrage is so strong that it’s pushing him into the State’s Attorney’s race so that he can “change the system.” He can barely get any of that out before Alicia’s all “don’t bullshit a bullshitter, Niles.” And it’s game on.

And that’s where this show shines. The Good Wife, like Alicia herself, has evolved from being all about lawyering and winning the case of the week to being about something much more complicated — life in the gray area. Alicia is now fully aware, in a way that she wasn’t six years ago, that there’s no way to be a person in her line of work without getting dirt under your fingernails. The world of The Good Wife is one where ethics are often trumped by cynicism and where doing “the right thing” is a completely fruitless pursuit because there may be no such thing. In Alicia’s world, if you can still see a “right thing” and a “wrong thing,” that just means you’re not really playing the game. 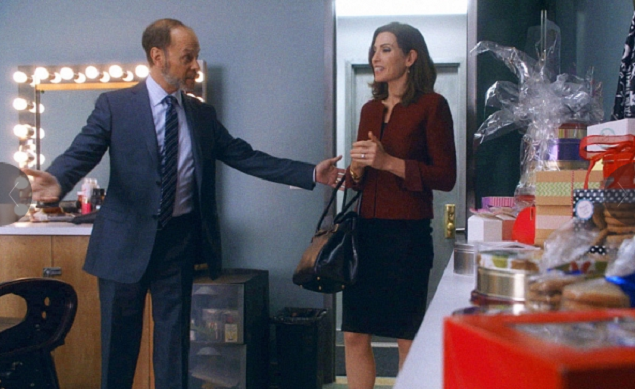