“I remember a time when Chicago was different. When people helped each other.”

Thus begins Alicia’s attempt to pander to the voters. It’s so fun watching people try to make Alicia warm and fuzzy. Her handlers really casually screen some footage of the courthouse where Will died while some terrible Irish music plays under it. And then David Krumholtz cuts a commercial that makes Frank Prady look like a gay dinosaur. (By the way, if you haven’t seen Krumholtz do this, then you’re not a real American.) All the while, Frank is reaching out to Alicia with a box of Peter’s Greatest Hits, saying that they should make a pledge not to go negative in the campaign. But since Frank has demonstrated that he is not to be trusted ever (like, ever), Alicia’s all “gurl, bye.” She still takes the box home, though, and has about a gallon of wine while she decides about opening it.

Peter and Alicia’s marriage has been a marriage of political convenience for a hot minute, but it’s still jarring to watch Alicia go through that weird Air Jordan shoebox of photos (as if anyone actually still develops photos on film) and see Peter with Ramona, the intern mom, all cozied up. Is it strange that while I was watching this, I was strangely disappointed in Peter for not being sneakier about it? Like, Dear Illinois governor, after 20 years, why aren’t you better at banging other women on the low? I guess the show is trying to sell that this time is different, that Peter has feelings for Ramona that are reciprocated. But Alicia, like the rest of us, isn’t having it. Even through all of Peter’s transgressions, Alicia still struggled with her own loyalty to the marriage. Even as we all collectively begged Alicia to do sex with Will all of the time, she only did sex with him a little bit. She stuck it out. She thought about the impact her choices would have on her children. She was a good wife.

But now she’s a pragmatic wife. Instead of flying off the handle about Peter and Ramona, Alicia goes into politician mode, calling Peter and booking him for a joint interview, where they do their best song and dance to sell the idea of them as a couple. The story of how Peter and Alicia met was a fascinating mix of genuine emotion and rehearsed theater, especially since immediately afterward, Alicia ran to Finn’s office and had a very difficult time keeping her own tongue in her mouth.

Alright, so I’m going to use my authority as a re-capper to make Finn and Alicia a thing. Yes, shippers, it’s time. (What do we call them? Falicia?) It’s great to watch Alicia have very real temptations and then have the stones to resist them, while Peter just wines, dines, and 69s with impunity. But somehow, he sails into the governor’s mansion, and Alicia faces an uphill battle just to become the chief prosecutor of her county.

So then Frank Prady’s campaign video comes out, and his mom is wearing the same dress as Alicia. She has to re-do her interview, and it’s nowhere near as real and raw as the first time. I guess some things just can’t be fixed in post. To add insult to injury, a very terrible commercial is leaked that ties Alicia to Lemond Bishop and everyone’s favorite wife killer, Colin Sweeney. Alicia goes HAM on Frank and tells him to get his PAC in line, and Frank continues to claim innocence. It’s admirable to watch Alicia and Frank try to stay above the fray, and it’s great to watch them slowly realize that they won’t be able to. The gay dinosaur ad will always get leaked, one way or another.

Meanwhile, Cary and Diane listen to a tape of Lemond Bishop casually discussing having Cary murdered, and somehow Cary still has the presence of mind to tell Lana to step off because she’s banging the woman Cary wants to be his boo. He thinks there’s a real chance the Feds doctored the tape. Cary has just completed a real bad-ass circle for me, because if I heard anything like that tape, I don’t care who’s banging who. (Bad journalist. Correction: who’s banging whom.) So Kalinda, whose loyalties are, shall we say, divided, gets Cary some protection.

But that protection doesn’t matter, because Bishop is still showing up at Cary’s office in some insane stripes and an even more insane (paisley?) tie, doing his best impression of Harrison from Scandal, and he’s got a new lawyer in tow. He does his best to seem like he doesn’t want to murder Cary, and no one believes him. Kalinda gets the tape from Lana (who wants to wife up all of a sudden) and gives it to her sound guy. Cary becomes extra-convinced that the tape is doctored because no one in America uses “phone” as a verb, and decides to go see Bishop himself.

And of course, that’s the dumbest move ever, because the tape is real. It doesn’t matter how many wall sconces or small children Bishop has; he will still for sure murder you. Except, in this case, he was just talking? Yes, anytime the show threatens to kill Cary, the smell of schmuck bait hangs in the air, but since they just shot Will in the neck last season, you still feel like anything’s possible. But this time, it felt strangely like something to hang a B-story on, and not a real narrative in and of itself. I’ll say it: I’m growing a little weary of Lemond Bishop. I want this whole Federal case put to bed. He keeps murdering peripheral characters but doesn’t seem to pose a real threat to the characters we care about. But apparently, next week, Cary goes to trial and seriously considers taking a plea deal.

But back to Finn. I love Finn. He’s almost like the male version of the Manic Pixie Dream Girl character, who comes along just so Orlando Bloom or Zach Braff can Learn Something About Life. MPD Girl has no needs. She has no story (except the convenient backstory she’ll deliver somewhere in the second act that makes her all the more lovable). She’s only there to wear mismatched socks and listen to Bright Eyes on her oversized headphones because that’s quirky. Finn walked into Alicia’s office and said, “Things can be simpler. You just need to… want them to be.” That is such a hot and naive thing to say. I, like Alicia, have always hated that the Lockhart/Gardner/Canning/Florrick/Agos offices were glass. Any office in which you can’t make out with someone you’re not married to is no office at all. Those two need to get it on, like, yesterday. Don’t let Peter have all the fun, Alicia. You’ll be better and sneakier at it anyway. 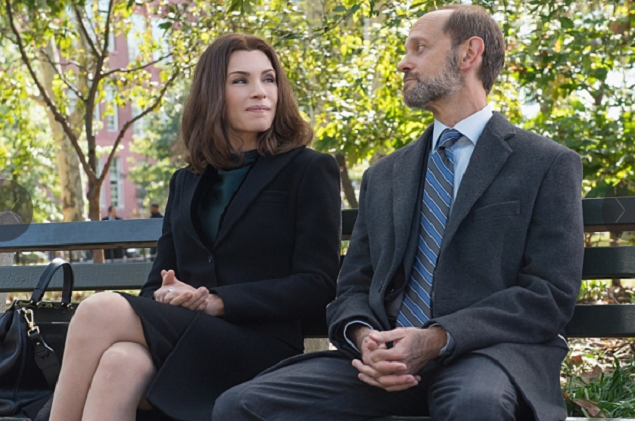