ME: Do you ever remember voting for Cook County State’s Attorney?

ME: Cook County State’s Attorney. The main character on the show I recap is running and it’s the biggest deal ever. Is it a big deal?

MOM: You mean do I vote for that?

MOM: I feel like I just look at the thing and see who’s the Democrat.

ME: It’s Chicago. Everyone is a Democrat. Does it matter if any of the candidates are black? Will you definitely vote for the black guy?

So Alicia’s people are putting a lot of work into something that doesn’t strike most everyday Chicagoans as a thing. That’s why it weirds me out when it’s a big deal that Alicia gets called to Grace’s school, where she wrote a letter quoting “Darkness at Noon,” the thinly veiled jab at Low Winter Sun. Apparently, Alicia is stupid enough to write a letter saying she would stab a teacher…? This particular storyline is quite insane, because why on earth would anyone, let alone Alicia Florrick, write such a letter? It feels like everyone tried very hard to come up with a scandal that could plague Alicia enough for a B story, but not enough for it to really matter. I kept waiting for the moment when we’d find out that it was really Grace, or Zach, or the housekeeper, or anyone other than Alicia, who wrote the letter. Even when we found out that the teacher who leaked the letter just wanted some union protection from the next State’s Attorney, it still felt incredibly silly — an unforced error of the type that Alicia never commits. I wanted much much more from the campaign story this week, especially since it’s the “winter finale” (which is now definitely a thing on all the broadcast shows). But the campaign got back-burnered so we could deal with what’s more important: Cary’s trial.

That trial begins in earnest this week, and The Good Wife starts by putting in the work to make us care about the personal lives of the judge and a Zak Orth juror and ASA Geneva Pine, who has been one of the more well-rounded ASAs in the show’s universe since the beginning. However, I sometimes think this show tries too hard (or, it could be argued, not hard enough) to make its peripheral judges and lawyers quirky and interesting. In past seasons, the show hit the sweet spot between nondescript and distracting when it came to its judges’ “personalities.” But now (and perhaps this is a Season 6 thing), I’m starting to get annoyed by it. Maybe most judges are as prickly and Neil Diamond-obsessed as Judge Cuesta. I don’t know. I’ve never been tried in criminal court.

Speaking of which, it’s very hard for me to watch Cary’s trial without thinking of Serial, the podcast that everyone in America (nay, the world) is obsessing over. I can’t help but think about how, for all the constitutional protections that are built into the justice system, the whole thing is still so subjective. The judge could be in a bad mood. The jury might not like that shirt you wore or that face you made. And before you know it, you’re in prison. So to avoid all of those contingencies, people take plea deals left and right. And the courts encourage you to take a deal so that the judge can get to his sushi lunch on time. He doesn’t care whether you live or die, and he “doesn’t want to be in the courtroom with you people”; he just wants to make sure his muffin is carrot.

That’s the situation Cary finds himself in, where the judge is openly telling Diane she has a losing defense. Alicia and Diane go to Alicia’s boo Finn to get some inside scoop on the plea deal, and he helps them majorly, only to have his help negated by Lemond Bishop’s frightening bespoke presence. More on that in a moment.

We have to take a second to talk about Falicia, which is what I’ve decided to call Finn and Alicia, because no one said I couldn’t. Finn comes to Alicia’s office so they can make rules for their relationship. They can no longer meet in dimly lit bars to drink heavily. (Let’s see how long that lasts.) It’s cute when they actually meet up in a brightly lit diner in the rain with pancakes. Then, of course, in a stroke of genius, the power goes out and a guy plays live guitar by candlelight. Even when Alicia and Finn don’t wanna go on a date, they’re on a date. And he slips her an envelope full of really helpful photos, too! Can they please please please just make out already? I’m a ‘shipper through and through, so I respect a slow burn. But Falicia is currently in a Crock-Pot, and I’d love for it to make its way to a skillet sometime soon.

In other news, Lemond Bishop is fighting with his girlfriend, everyone. Dylan (Lemond’s soccer-playing son) has to be the most scarred child on network television. Kalinda goes to Lemond’s house with the photos that Finn gave Alicia and she tells Lemond, straight up, that drug dealers have been seen coming into and out of his place. Tell us where Dante (our star witness) is, Kalinda says, and maybe Child Services doesn’t have to know who you hang out with. Of course, because Lemond is in a pink striped shirt and breathing heavily in his close-up, he loses it on Kalinda. I don’t know what the show wants me to think about Lemond Bishop. Is he a threat, or isn’t he? All I know is that when Kalinda says “looking forward to this being over,” I can’t help but agree with her. He’s been kinda sorta terrorizing the entire main cast for years now, and I kinda sorta just want him to go away.

But of course, when Dante gets to the stand, and Lemond Bishop conveniently comes to sit in on his testimony, Dante’s all “yup, Cary’s guilty as hell” and it all falls apart. Matt Czuchry’s been doing great work all season, but he was never better than in the scene in which ASA Pine extends the new deal. They’re obviously going after Bishop, the big fish, and they want Cary to make their case by testifying against Bishop. This will, of course, get Cary incredibly murdered, so Cary says no. The alternative is definitely a couple of seasons as a character on Oz, until Bishop magically finds Cary on the street and offers him a job as a “consultant” in Spain. This is all too much, and Cary realizes that two years in prison, if it ends this nightmare, is preferable to continuing to fight. I yelled at my television a lot, but I also understand how this could happen. Prosecutors wear you down until you have no fight left in you. Then you’re all of a sudden in front of the judge revising your plea. I have, in past weeks, thumbed my nose at the idea that The Good Wife would send Cary to real prison. But this week, in our game of narrative chicken, the Kings are winning. 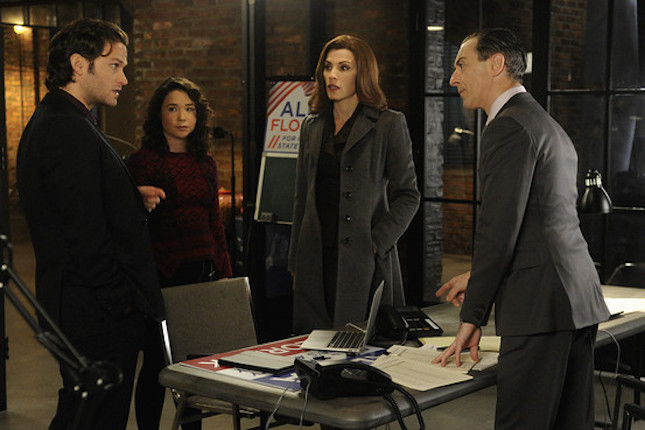