Matthew Goode is asleep in Freemans, or, at least … he’s resting his eyes (and also his head). Mr. Goode, recognizable as Finn Pommer on CBS’ show, The Good Wife, freely admits to taking a nap after a morning spent drinking margaritas for some media thing. He looks suitably abashed in that way only the Brits can look suitably abashed. At least we think he does: he’s almost unrecognizable under a beanie, Harry Potter glasses, and a practically Fagin approach to layers.

Revived by artichoke dip, Mr. Goode chatted about the expat life, the weather (a British obsession) and his role as code-breaker Hugh Alexander in The Imitation Game, the new biopic chronicling the tragic life of early computer scientist Alan Turing, who decrypted the Nazi’s Enigma machine during World War II, but was ingloriously prosecuted for homosexual behavior and sentenced to chemical castration.

New York Observer: The first time I heard about Turing—my reaction was, “It’s insane that this guy isn’t more famous here.” He’s the perfect American story for this moment: the socially awkward, arrogant but brilliant tech wunderkind, like Steve Jobs or Mark Zuckerburg.

Matthew Goode: Growing up, because of his homosexuality, his death, it was all pretty hush-hush. You just heard about his work on Enigma. But yes, he fits more of an American archetype. He was very insular, a little bit Asperger’s. Anti-social. He was hemmed in by how much his mind worked.

NYO: People have commented on the movie’s lack of a homosexual love scene . . .

MG: Right, but we didn’t show his death either! And to me, that’s much more of a sensationalistic aspect.

MG: There was a rumor for awhile that this was the apple in Macintosh’s Apple logo. You know, with the bite taken out. I think that was debunked though.

NYO:Sure, Turing might have saved us from the Nazis, but think about how much happier he’d be as a start-up billionaire living in Palo Alto.

MG: All brilliant men with legacies share similar traits. The ones who become important to the world will do so, because I think they spend a lot of time on their own. When you talk about the 10,000 hour rule, they don’t mention how many hours are spent alone.

NYO: Of your 10,000 hours: how much of it do you spend in New York, filming The Good Wife, with its intense 23-episodes-per-season schedule?

NYO: Harder time to be in New York: winter or summer?

MG: The summer, you can go places quicker without thirteen layers on. But then, you know, it gets ludicrously hot. It’s a funny old town you got here: for like eight or nine months, it makes it hard for you to even exist.

NYO: Do you find yourself at that sweet spot of New York’s celebrity and fashion nexus?

MG: It’s pretty courteous to me. Funny, Mark Strong was having a party the other night and he was saying ‘Isn’t it brilliant here? Everyone is so kind and not in your face?’  I love how New York adopts people. It’s a bit like London, actually. A bit of a cultural mosaic. Partly that’s our history of trying to imperialize the entire world. But the whole thing about Ellis Island, people getting dropped off there and really, unless you’re a dick, they’ll go “Cool, glad you’re here!” 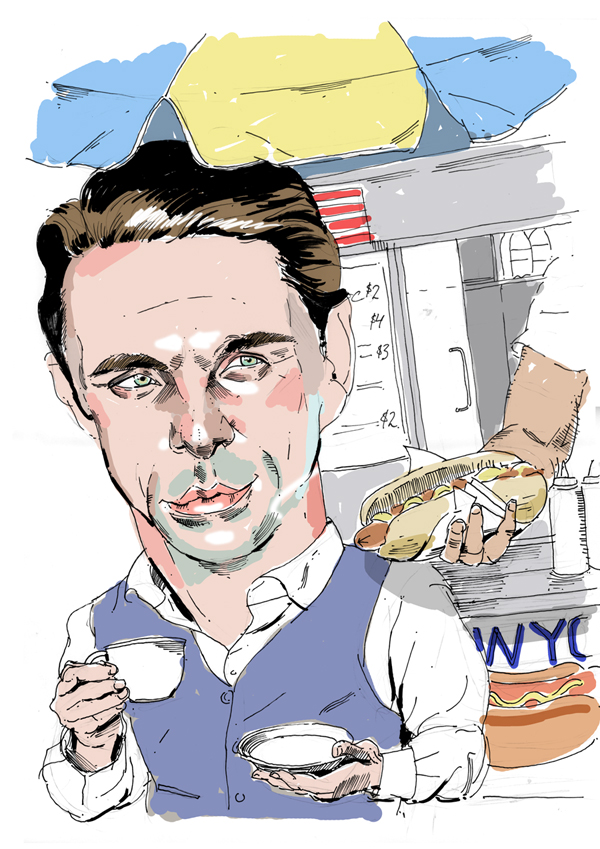