I bow to no one in my appreciation of Hugh Jackman’s many talents, but as much as it grieves me to admit it, I guess he’s not perfect. He makes mistakes, too, especially in his failure to acutely assess the value of a script. Otherwise, he wouldn’t be caught dead under a paperweight called The River. I understand why artists of his caliber want to challenge, re-think and re-evaluate careers that threaten to grow stale with uninterrupted success. He’s tired of carrying one-man musicals that remain the equivalent of a year at hard labor, and I would sympathize with anyone’s need to say goodbye to lousy movies forever. But instead of a step in a brave new direction, The River is a wash down the drain of nincompoopery. This is just what I expected going in. It was written by Jez Butterworth, a dispenser of dystopian dreck like Jerusalem. That hysterical, overwrought pile of pretentious swill is still the worst thing I have ever suffered through in a professional theater. The River is not quite as bad as Jerusalem, but it’s in there trying.

This is one of those lunk-headed self-indulgences that pretend to have portent and promise on paper but turn out to be a complete waste of time and talent signifying nothing. O.K., The River is about one thing—Mr. Jackman’s ability to sell tickets. His fans will line up for anything, and that includes me. They don’t have a clue what they’re seeing, but they’ll go as long as his name appears on a sign. By the end of this hoax, I was looking for a sign of my own—the sign over the door marked “Exit.”

After a long and annoying warning by an understudy instructing us all how to turn off our electronic devices, the lights reveal a night with no moon in late summer when the sea trout are running. Mr. Jackman plays The Man, an outdoorsman with a passion for fishing. Enter his latest girlfriend, called The Woman. They spew forth an endless series of numbing monologues before gathering up their rods, reels, tackle bait and other gear, to head for the lake. This is (mercifully) only a one-act play without intermission, so nobody stays offstage for very long. When they return, The Woman has turned into another woman. She is now called The Other Woman. In the middle of the blabber The Man reveals his weaknesses, his failure to live up to the role of significant macho alpha male, and the significance of The River as a mirror to his soul (when he looks in, he sees the reflection of a child). Most of all, he talks about why he’s pissed off about fishing. (It’s The Woman with no experience who catches the trout.)

But the vagary of weakened testosterone flow is nothing that needs to concern us this night. We are too worried about Mr. Jackman’s sharp kitchen knives. As the centerpiece of the play, the star chops vegetables, meticulously fillets a fish, guides it into a big frying pan and serves it to The Woman. The audience is transfixed. In the end, a third woman enters the stage. She is the new part of his sexual triptych, a new start. The End.

What a thankless tirade for all. The third woman doesn’t even get fourth billing in the Playbill. They are all fine, even though you leave wondering if they have the vaguest idea what they are saying or what The River is all about. Mr. Jackman is fine, too. His simplest movement focuses the attention, even though he’s up to his rippling thighs in rubber Wellingtons, his handsome countenance framed by an unbecoming crew cut that cocks his head to a querulous angle. By the way, the fish he painstakingly fillets onstage doesn’t actually fry. Instead of the smell of fish, you leave the theater overwhelmed by the essence of twaddle. 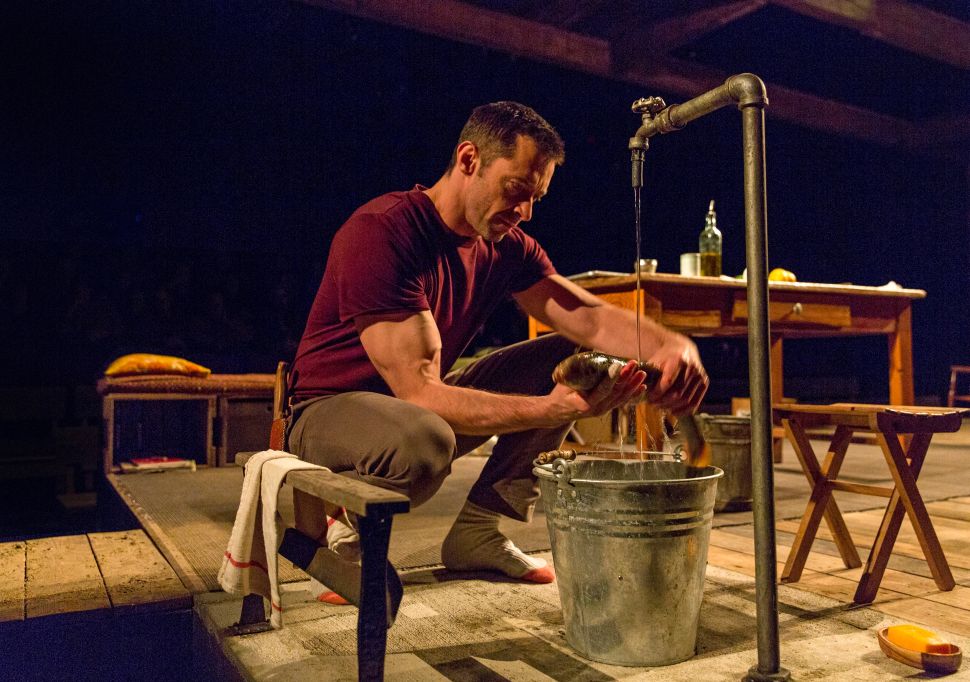