The bust-filled second floor at the Center for Fiction was at capacity last Thursday to hear a reading by Atticus Lish—an ex-Marine, a translator of technical Chinese texts, and now one of the most acclaimed debut novelists of the year—and at the start of the questions period, an older man raised his hand. He had a shock of white hair and was wearing a cream sweater and asked about chapter 42, specifically about an act of shocking violence that occurs toward the end of the novel. He had two very good reasons to ask about the structure of the narrative of the novel: The old man was Gordon Lish—the man credited for wholly shaping the prose style and feel of Raymond Carver’s oracular stories and in general one of the most celebrated fiction editors alive—and he is also Atticus’s father.

Now, after decades of following not in his dad’s footsteps, the son is a writer, too. Set largely in Flushing with flashbacks to Iraq and China, Atticus Lish’s Preparation for the Next Life tells the love story of two people living at the periphery of society: Zou Lei, an ethnic Uyghur woman from Western China working illegally for meager pay while living in a plywood cubicle in a Chinatown tenement, and Skinner, a dented-can Iraq war vet scarred by a traumatic brain injury and PTSD sustained during his stop-lossed second tour, spending his savings on takeout, cigarettes, and alcohol, and taking tranquilizers to get him to sleep. Meeting by chance and bonding over a shared interest in exercise, Skinner and Zou Lei attempt to scrape out a corner of security in the margins of America. The book, out this month, is in turn affecting and devastating—it revels in this utterly unlikely relationship with stark clarity and a deep, unflinching empathy.

And though it was released not through one of the all-powerful quickly conglomerating publishing houses and instead on the tiny Tyrant Books—deftly led by the charismatic Giancarlo DiTrapano, who lives in the Hell’s Kitchen studio that doubles as the Tyrant office—it’s already sold out of a printing and earned raves in The New York Times and The Wall Street Journal. (Mr. Lish did somewhat recently get help from a new agent, the totemic Binky Urban, who has since inked several foreign rights deals throughout Europe.)

When I met him the day after the reading at Sophie’s on Avenue A, he explained he’s still not comfortable with his new identity as a critically acclaimed author.

Indeed, the novelist looked nothing like the cosseted kids in Franzen-style spectacles and J. Crew tweed coughed out of MFAs. Atticus Lish had a shaved head (“you don’t want to see what my hair looks like, trust me”) and was wearing a t-shirt from his gym, a waffle thermal, and practical looking jeans. His refreshment of choice was  not a microbrew but rather a bag of Bazzini peanuts.

Lish’s path to writing was a roundabout one—he says he did not entertain serious literary ambitions until around 2003. After dropping out of Harvard, he spent a period living in a series of basement apartments in Queens, and a brief stint the Marines before coming back to Cambridge and graduating. Then Lish and his wife moved to China before returning to New York for a job at a translation firm, working on decidedly nonliterary texts.

He continues to work at the company, and his co-workers had no knowledge of the five-year undertaking of writing the book until galleys started to turn up (a few coworkers showed up to the reading).

Mr. Lish did have a flash of literary success early in life. When he was 9, the budding writer contributed some prose that ended up inserted verbatim into The Names, the classic novel by his father’s buddy Don DeLillo. (“A printed shout from the housetops goes as well to Atticus Lish, in fond appreciation,” reads Mr. DeLillo’s note in the acknowledgements.)

Later at Sophie’s, we were joined Mr. DiTrapano, rumpled in corduroy, and he immediately ordered himself a Jameson neat and a Jameson Ginger. That Mr. DiTrapano has earned a reputation as a party fixture is quite the stark contrast to the disciplined, almost ascetic Lish, himself a devoted gym-goer, bike commuter, and sometimes-grappler. They met at Bar Nine late in the aughts, whereupon Gian asked Atticus if he had any work. The two clicked. In 2010 Mr. DiTrapano would publish Life is with People, a collection of Mr. Lish’s comic and grotesque drawings, through Tyrant. And all the while, he was working on what would become Preparation.

“Out of the blue—it was literally just a thought that crossed my mind—I called him up and said ‘Do you have a novel?’ and he said ‘I do,’” his publisher and editor recalled.

The book arrived via email as he was leaving for a vacation in New Orleans, and having forgotten his laptop charger, Mr. DiTrapano began reading the 400-page manuscript on his phone, and quickly devoured the whole thing over the course of the three-day trip.

“All my friends and my boyfriend were, like, ‘Would you put your goddamn phone away?’” he said. “‘I really can’t, I can’t stop reading,’ I would say. And as soon as I was done I called him and we struck a deal.”

Lish, meanwhile has already begun work on his next novel, the subject of which he declined to discuss. He wasn’t being cagey or pretentious. He’s just not too into talking about himself as a novelist.

“On days where I put in really good hours, I’m like, ‘OK, I’m a writer,’” he said, shooting back another peanut. “And on days where I’m not disciplined and I don’t do as much as I should, or it doesn’t go as well—then my writer identity is in doubt. I’m still I’m still working on that writer identity.” 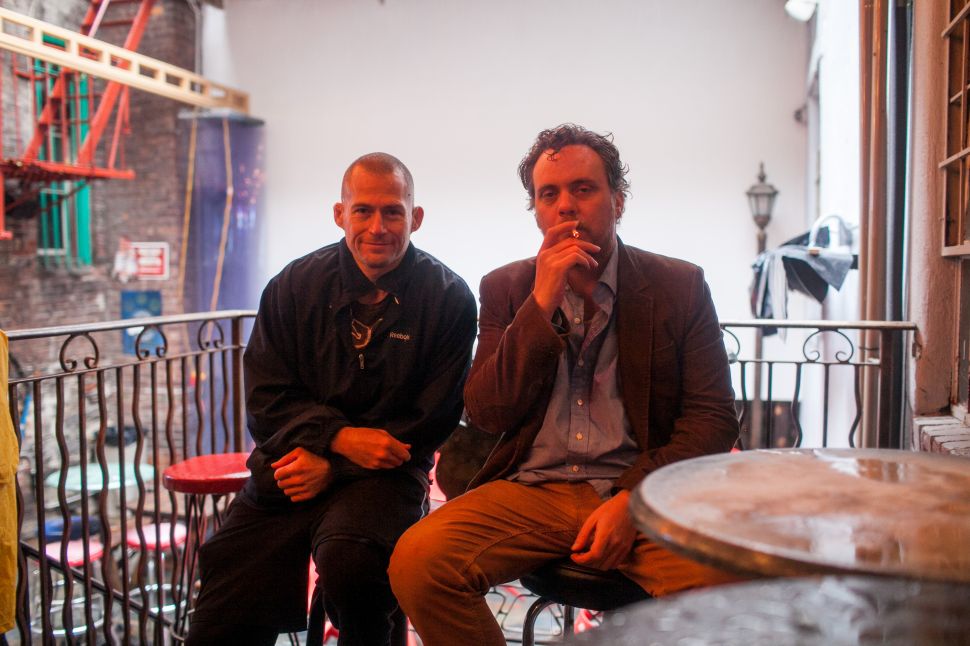