I like New York audiences. They’re sophisticated, serious, appreciative, well-trained. Though there are some surprising lapses, they generally don’t clap between movements of a symphony. Latecomers generally excuse themselves en route to their seats. But they can also be insufferable, especially at the movies. Or at least some movies.

No, not in the multiplexes. Most Hollywood films are so bad it doesn’t matter whether people talk during them, or even—in some cases—talk back at them. Sometimes such chatter is funnier than what’s on the screen. The problem comes in New York’s art film houses. The worst—because it’s also the best—is Film Forum.

Film Forum is a wonderful place. You can just show up there and usually find something worth seeing, foreign or classic, cult or cutting edge. And it’s filled with kindred souls, people who’d have been your best friends had you gone to a different school. Even its popcorn is superior, freshly replenished from one of those tilting tubs rather than unloaded dead-on-arrival from Hefty bags hours or days before, and impregnated with that carcinogenic artificial imitation butter flavored agent. But show a certain kind of serious (or a pretentious, or opaque) film—and grant some New Yorkers the anonymity of a darkened room—and obnoxious things can ensue.

At Carnegie Hall or Lincoln Center people may behave themselves because they have to: they know the withering stares they’ll get for whispering or unwrapping cough drops too noisily. But once safely shrouded in darkness, people are transformed. A peculiar New York-style arrogance and one-upmanship emerges, which of course is really New York-style insecurity.

A few months back, for instance, I went to see Joseph Losey’s Accident at the Film Forum. Losey was blacklisted, which makes him interesting, but he and his politics probably weren’t the principal attractions that night. Nor were Dirk Bogarde or the young Michael York or any of the other actors. The real lure, most likely, was Harold Pinter, who wrote the screenplay. He brings out the very deep thinkers.

The lights went down and two separate dramas, with two separate soundtracks, began. On the screen, a pair of unhappily married middle-aged British professor husbands (one of whose wives was pregnant) drooled over, vied for, and pawed at the same beautiful, pouty, ruthless young woman, a philosophy student from Romania. Meanwhile, in the seats, in the dark, patrons vied to show who was the cleverest, the quickest on the uptake,  the first to figure something out or to get a joke, and then let everyone else know it.

Pinter’s soundtrack was the impeccable badinage of Oxford dons, the exotic Romanian-inflected English of the young woman, the flippancy of the foppish, reckless, dipsomaniacal, cricket-playing young aristocrat she really covets. The patrons’ soundtrack consisted of hair-trigger laughs (often inappropriate), along with portentous, all-knowing burbles and exclamations, snorts and grunts. There were “hmms” and “ahs” and “ha!s” and “aaahs” and “mmmms.” Lots of “mmmms,” in fact. And more than a few “mmmmmms”—more half notes than bursts.

Few things are more pleasurable than watching a beloved film at the Film Forum with scores of other people feeling exactly as you do, anticipating, and savoring, the same familiar lines. There, more than at any theater in New York, they know that plane is dusting crops where there ain’t no crops, or that all Switzerland had to show for five centuries of brotherly love and peace was the cuckoo clock. But during Accident, the spirit was competitive rather than communal.

One prime offender was right next to me. So often did he make his all-knowing noises that I was soon anticipating them as much as following the action. At the film’s end, as our heroine finally prepared her return (husbandless) to Romania, she removed a metallic object from the wall and placed it under her arm. “Mmmm!” my neighbor murmured. “Mmmmmmm!” I muttered back, throwing him a dirty look which, of course, he’d never see. And when the lights went up, there he was. Looked like a nice guy, actually.

New York can be hard on a psyche: There’s always someone with a nicer apartment, a more prestigious job, a better-selling book or a bigger brain. Suddenly, you understand why the Film Forum is so crowded on a weeknight for Harold Pinter. Sure, it’s partly to see something interesting. But it’s also therapy, a balm for their battered egos. And, at $12 a session (plus $5 for that great popcorn), it’s a steal. 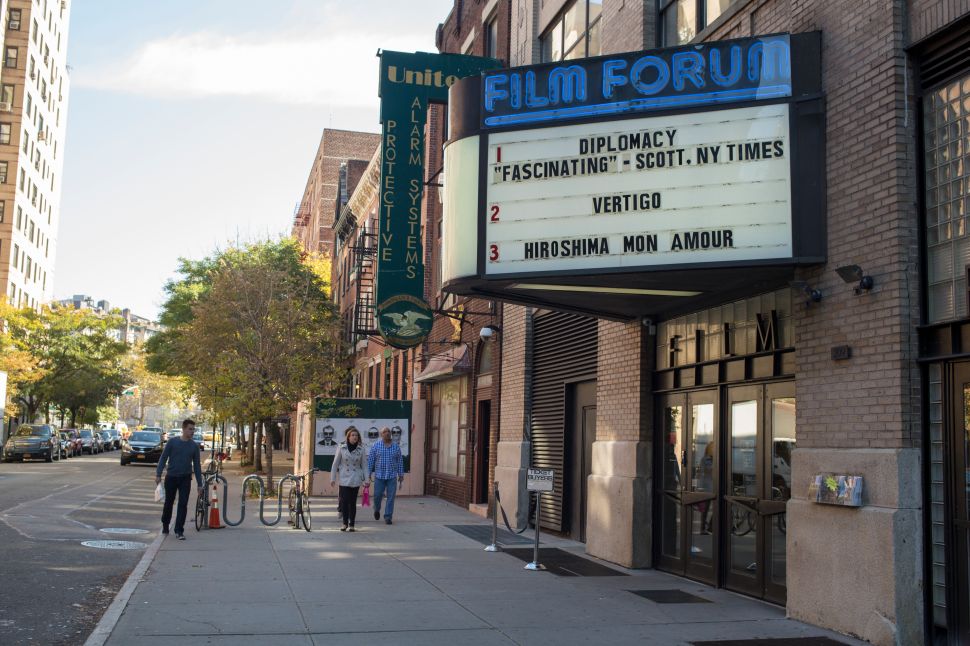