As Bellevue Hospital releases Dr. Craig Spencer today, the hyperventilating media coverage of the outbreak seems to be in remission—at least until news of the next domestic case boosts hazmat suit sales. Yet the damage has been done.

Rewind a month. “Ebola ‘The ISIS of Biological Agents’?” ran a continuous chyron as CNN legal expert Ashleigh Banfield grilled Amar Safdar, an infectious disease specialist at NYU, about mass transit turning into a subterranean petri dish for suicide viral carriers. Safdar quickly shot down Banfield, but, hey, if it’s being considered on CNN, there must be some likelihood of it happening, right?

On Fox News, Elizabeth Hasselbeck advocated “closing our borders,” as if that was even an option. But no one could possibly best Fox News’ psychiatrist Dr. Keith Ablow’s racist claim that President Barack Obama won’t do anything because his “affiliations are with them, not us.”

Fox and other right-wing fear-mongers, including professional fulminators, Mark Levin, Rush Limbaugh, and Michael Savage, contributed to the widespread belief that Ebola could be spread by casual contact. But even the New Yorker sprayed gasoline on the flames, when Richard Preston, author of The Hot Zone, wrote in the Oct. 27 issue that the virus might be mutating and “could become more contagious even without becoming airborne.”

Given the public mood, it was probably only a matter of time until such overheated rhetoric boiled over into violence and hysteria. That’s exactly happened at a Bronx intermediate school on Oct. 24 when a barrage of taunts escalated into fists. Two brothers, 11 and 13, who had just returned from Senegal, were pummeled by classmates yelling “Ebola!”

Charles Cooper, head of the Bronx-based African Advisory Council, has been fielding many complaints from his embattled community. He cited the example of an African nurse who happens to works at Bellevue Hospital, the city’s most well known Ebola crisis unit. As she was leaving her shift, a passerby shouted to her, “You have Ebola!”

Public-health experts, public officials and West African community advocates blame the media for creating an atmosphere that remains combustible. “The media suffers from a lack of education about what Ebola is and how it is contracted,” Mr. Cooper said.

As a past volunteer for organizations like Doctors Without Borders, Dr. Kennth C. Rondello, a professor of public health and head of the Department of Emergency Management at Adelphia University, has firsthand experience of epidemics like Ebola.

“If someone asks me, ‘Is there a possibility the virus could become airborne,’ I tell them the reality is infinitesimal,” Dr. Rondello told the Observer. “Yes, it’s not zero. . . There is the theoretical possibility in the future it could also mutate and become more deadly. But there’s no immediate threat —not by any means. It could also mutate and become less deadly.”

In fact, according to Dr. Rondello, there has never been a recorded instance of a non-airborne virus mutating into an airborne one. Which is why he is so infuriated at experts like virologist and frequent media source Dr. David Sanders, who told Fox News that “it has the inherent capacity to enter the lung from the airway.”

The epidemic of misinformation reached many West Africans in New York, some of whom are themselves fearful of casual contact. New York City’s West African immigrants are mostly concentrated in a few enclaves in the South Bronx, Harlem, and Crown Heights. Staten Island’s “Little Liberia” neighborhood boasts the largest concentration of Liberians outside the mother country.

“There’s a lot of confusion about the causes of transmission,” said Gregory Mann, a Columbia University professor of African studies. “Women are afraid to come to Harlem to have their hair braided. But even the braiders themselves are unclear about it.”

One Harlem salon owner told Mr. Cooper that she couldn’t understand why she kept losing business. Finally, one of her customers confessed that someone asked her, “Aren’t you afraid of getting Ebola in Harlem?”

Such an overreaction becomes more understandable after looking at the recent headline in The Source, the popular hip-hop magazine, about the singer Akon performing “in a bubble in Africa to avoid contracting Ebola.” Actually, the rapper used the same plastic bubble at concerts in Australia and Dubai four years ago. “A single image of a rapper interacting with a crowd in a plastic bubble in an infected country can undo weeks of information,” Dr. Rondello said with a sigh.

To reassure the city’s West Africans, groups like the African Advisory Council have been holding public forums to educate its constituency about the disease. It’s difficult, however, to communicate with such a polyglot community. Many immigrants continue to use their native language, and Africa is home to thousands of tribal dialects. Nor have city officials sufficiently addressed the problem: If you are Welsh or Catalan, you can have a New York City informational website on Ebola translated into your mother tongue. If you speak Fula, a language stretching across 20 West African nations, however, you’re out of luck.

The biggest problem for immigrants and everyone else in New York, however, isn’t the language barrier. It’s the overheated language that has replaced responsible reporting.

Dr. Rondello compares the reaction to Ebola to other public-health scares, such as parents who blame their children’s autism on vaccinations or the panic in the early days of the AIDS epidemic when mosquitoes and public toilet seats were feared to spread HIV infection. .

“Ebola is real,” Mr. Cooper continued. “But these are real people being affected by this hysteria. If this goes on, it will impact an entire generation.” He believes West Africans must come forward and make their voices heard — voices like Amidu and Moussa. Amidu, a native of Ghana, arrived here in 1999 and is currently raising a family in the Bronx. Moussa left Senegal a few years ago and also lives in the Bronx. Both men, like many African immigrants, work as street peddlers: Amidu sells male fashion accessories in Hell’s Kitchen; Moussa, incense on 125th Street in Harlem. .

Moussa related in Pidgin English the story of one friend who had a passerby yell at him for coughing on a Midtown Street. Pointing to a disheveled row of single packet of popular remedies like Aleve in the window of a nearby bodega, Amidu joked that Americans like to obsess over even the slightest ailments. “Everyone, they hear ‘Ebola, Ebola, Ebola’ all the time on the TV,” he said. “But no one gets the Ebola!”

Steve Weinstein is a journalist who began covering the AIDS epidemic in 1983. He has written for Out, The Advocate, and The Village Voice. 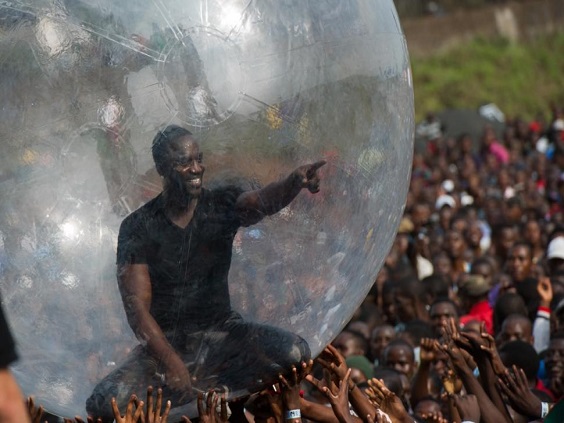