Most New Yorkers don’t give much thought to those blue scroll-style signs dotted throughout NYC’s subway exits—dismissing them as some peripheral text for tourists. But these signs are actually the backbone of Governor Cuomo’s Path Through History (PTH) initiative.

The project was created two years ago to “showcase New York State’s history and cultural significance” and “promote tourism and economic development in communities in every region of the state,” according to Governor Cuomo’s press release. And if you haven’t noticed them in subway stations, then you’ve likely seen one of the program’s more than 3,000 signs along the New York State Thruway, donning the Empire State’s bold blue and yellow and creating, between exits, a roadmap of hundreds of historic attractions that stretch from Long Island up to the Finger Lakes.

Yet since its inception, the initiative has been criticized for being both ambiguous and disorganized, causing some to deem it parent-less following its second birthday this past August.

The Greenwich Village Society for Historic Preservation flagged up the signs, describing their list of “disjointed items” (a directory aimed to promote nearby museums, cultural hubs, and institutions) as unclear, claiming that the whole campaign “remains a mystery.” Meanwhile, incandescent bloggers called out PTH for its blurred direction and lack of leadership on The New York History Blog–blazing through a name-filled litany of the program’s potential directors and then ruling them all out.

Notably, no one person is fully in charge of Path Through History, nor is there any centralized authority or specific leader.

But according to Ross Levi, Vice President of Marketing Initiatives for Empire State Development, it is “by design” that the program operates this way—allowing it to work across several platforms, at both the regional level and the state. Integrated into the tourism campaign of I LOVE NY, Path Through History is “a team effort,” said Mr. Levi, and “was never intended as a standalone initiative.”

Governor Cuomo appointed, along with PTH, a catalogue of prized and leading historians to serve as counsel, essentially, for the project’s progress. As a member of this Historic Corridor Task Force and a Professor of History at Purchase College, SUNY, Lisa Keller said that in matters of history—particularly local history, an often victim of de-prioritization—the confusions that PTH faces are not uncommon.

“There are a lot of issues about New York State history,” said Ms. Keller. “Path Through History is the tip of the iceberg, actually. There is no consensus on a lot of these issues and there’s no clear ownership of this.”

However, Ms. Keller contended that Governor Cuomo is the “head” of the project and “definitely the spirit behind it.” But a primary concern, even when you have people committed to the cause, is proper funding. “The problem has been for many, many years that everybody was very much in favor of history but nobody was willing to pay for it,” said Ms. Keller. “So history is very much fragmented and not financially supported by anybody.”

The program, of course, is still young, and Mr. Levi was optimistic of its accomplishments, even in only two years. “It has played an unprecedented role and has raised the profile of heritage tourism and continues to evolve,” he said. He deemed it “perhaps the most expansive program of its kind.”

The initiative may still be in its fledgling years, but with 3,000+ signs, at least, it seems pretty sizable. 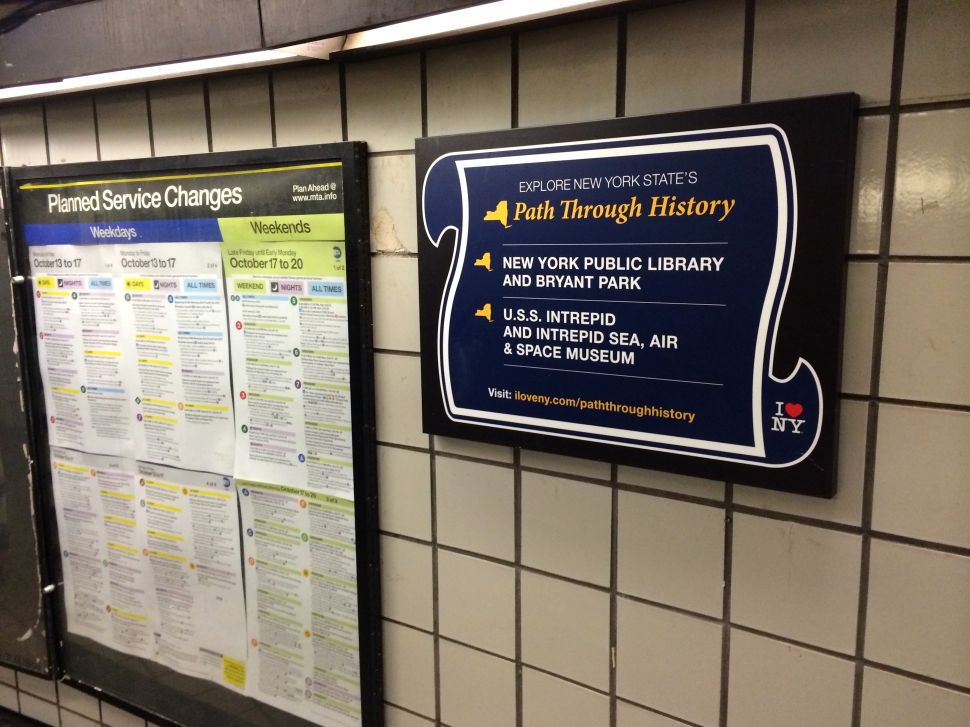