Mr. DiNapoli, a Long Island Democrat, dispatched with Republican Robert Antonacci, the Onondaga comptroller, winning 60 percent to about 37 percent with 91 percent reporting. Of all the statewide races, Mr. DiNapoli’s was the least competitive, though the comptroller after barely survived re-election four years ago.

Mr. Antonacci probably never had a chance. In addition to history–it’s been decades since New York elected a Republican state comptroller–Mr. Antonacci struggled to raise the cash needed to unlock public matching funds. He was the first and only candidate in the state to participate in a pilot program for the public financing of elections, which Mr. DiNapoli supports.

Despite this support, Mr. DiNapoli declined to participate in the program at the urging of good government groups who argued Gov. Andrew Cuomo’s efforts to take big money out of politics were half-hearted at best. Mr. DiNapoli, who has kept the state on generally sound fiscal footing, never had to campaign hard and met Mr. Antonacci for one televised, and relatively cordial, debate.

Though he has had disagreements with Mr. Cuomo in the past, Mr. DiNapoli appeared tonight with Mr. Cuomo at the Sheraton Hotel in Times Square. He also spoke at a campaign rally for the governor yesterday.

This story will be updated as more information becomes available. 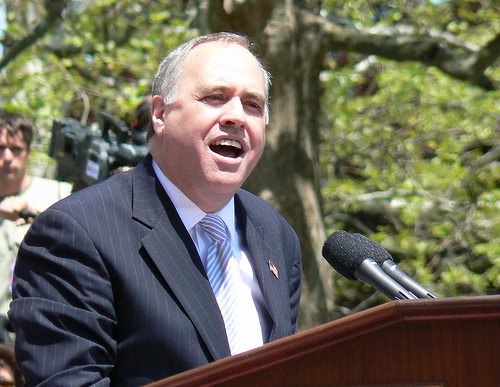