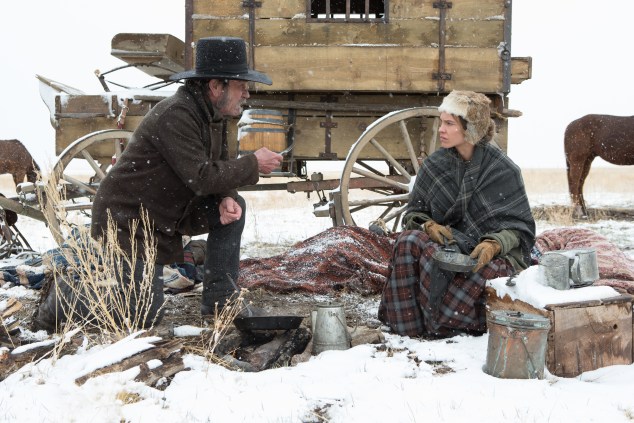 Tommy Lee Jones and Hilary Swank in The Homesman.

Cowboys and Indians may equal box-office Ebola, but The Homesman, directed by Tommy Lee Jones, is not your grandma’s typical Hollywood western. It’s a grim, lyrical and unpredictable adaptation of the colorful 1988 novel by Glendon Swarthout about the harrowing hardships of frontier life and the terrible toll it took on the brave and battered women who tried to survive. In some ways, it’s rough on the viewer, too, but the payoff is memorable.

Plowing fields, pumping water, feeding livestock, doing the cooking and mending and scrubbing between painful pregnancies and giving birth on crude kitchen tables and mattresses of rope, women grew old before their time. Some of them didn’t survive at all. The carefully calibrated screenplay by Mr. Jones, Kieran Fitzgerald and Wesley Oliver chronicles the lives of three women who lost their sanity trying. In her best role since Million Dollar Baby, Hilary Swank plays Mary Bee Cuddy, a hardened, pious spinster, plain as cardboard, recruited to drive them from the Nebraska territory across the Missouri River to Iowa in a cage on the back of a wagon pulled by two mules. On the perilous journey, which takes five weeks, the women come across a gnarled old crook named Briggs (played by Tommy Lee Jones himself), sitting on a horse and tied to a tree limb with a noose around his neck, strung up by vigilantes for claim jumping. In exchange for saving his life, Briggs agrees to accompany Mary Bee and her human cargo to safety on their arduous trip. The suspense is just beginning.

The three demented women include a catatonic, doll-clutching 19-year-old (Meryl Streep’s daughter Grace Gummer) banished by her husband after losing her baby; a violent schizophrenic (Miranda Otto) who threw her newborn infant down the hole of an outhouse; and a hysterical immigrant (Sonja Richter) who lost her mother in the snow and now spends her days screaming for an exorcism from the devil. Encountering rapists and murderers, their survival is something of a miracle. So is Briggs’ since Mary Bee is so desperate and lonely she offers him marriage as a business proposition. He deserts them all, leaving her to struggle through the wilderness on her own. By the time he experiences a change of heart fueled by guilt, it’s too late to save them. The rest of the movie shows the results of his attempts to make amends. Meryl Streep makes a late, honest and humane appearance as the churchwoman in Iowa waiting to dispatch the women to their families in the East. Director Mr. Jones calls in the chips of actor Mr. Jones and the camaraderie he developed with co-star Ms. Streep in the wonderful, underrated romantic comedy Hope Springs. They click again in the civilization scenes in Iowa, filmed in Georgia.

The rest of the movie was filmed mostly in New Mexico, where Rodrigo Prieto’s cinematography of the butterscotch buttes, primordial prairies and moonlit canyons of the rugged West beautifully captures the desolation of a forgotten frontier. The direction catalogues the feelings and frailties of the characters without veering in the direction of sentimentality. You feel the anxiety of a lonely old maid in a man’s world with no future. You also feel the emptiness and isolation of women alone in the punishing cruelty of a wasteland without pity. Texas native Mr.  Jones shows a natural affinity for his home territory, investing The Homesman with the same grit he previously explored in The Three Burials of Melquiades Estrada. And although the movie often moves with the deliberate slowness of a centipede, his direction retains a firmness of grip, like a crippling handshake, that keeps the tempo of the narrative moving forward. A grand, shocking saga of a movie, The Homesman is the kind they don’t make much anymore. 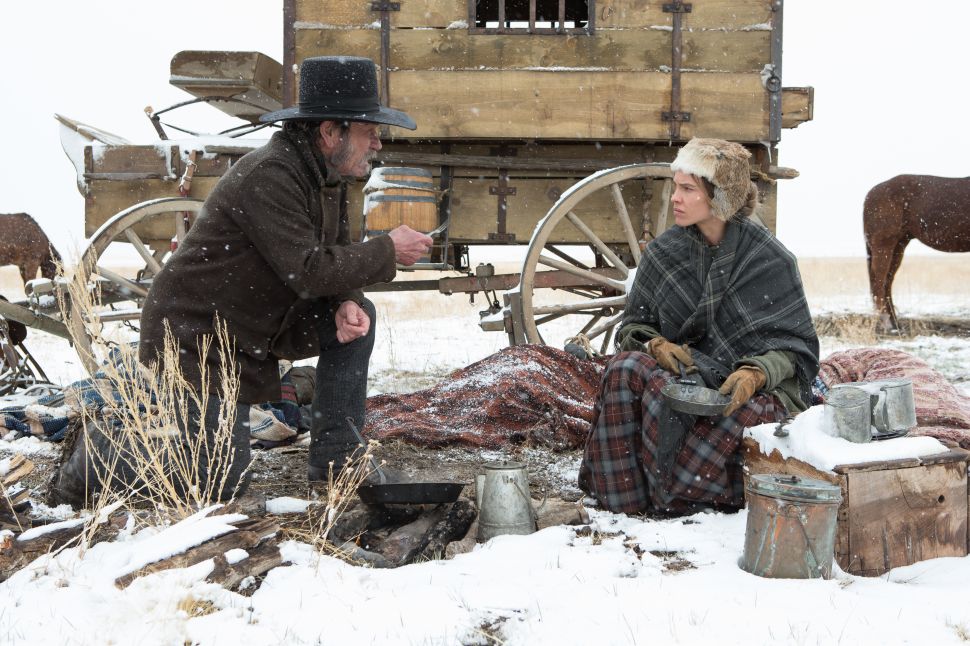