For perhaps the first time, Top Chef and the city of Boston fit together just right in this episode, thanks to an assist from every foodie’s favorite holiday: Thanksgiving.

Finally, our chefs enjoy a locally themed contest that don’t feel super hackneyed — there’s no forced history lesson to recreate historical battles that have nothing to do with food (which was the central premise of last week’s episode). Instead, the chefs first harvest a local delicacy perfect for fall: cranberries. Then they cook a traditional first Thanksgiving at Plymouth Rock. Sure, we get some agricultural info about cranberries and history about Thanksgiving — did you know they didn’t have forks at the first Thanksgiving, let alone turkeys? — but unlike our other lessons thus far, this is about food. It’s a natural fit. It makes sense. After lots of traipsing through Boston’s tourist traps, watching our chefs traipse (ok, struggle, in most cases) through a cranberry bog and cook in a colonial settlement using old clay pots and spits delivers what is my favorite Top Chef episode of the season.

(About last week’s episode: sorry for the lack of a recap. I had the flu, a decidedly unappetizing illness. But when I came out of my fever-induced stupor and was able to operate the DVR, I was just as happy as his fellow contestants to learn Aaron was sent home.)

We begin at the Top Chef house, where those who remain are taking notice of the shrinking crowd, leaving little room for error, and celebrating that Aaron is gone since nobody liked him. Suddenly, Season One’s Tiffani Faison, a Bostonian, shows up in their kitchen to shepherd them off to a secret location — which turns out to be a picturesque cranberry bog right out of an Ocean Spray commercial. You didn’t think Top Chef would do a segment on cranberries without extremely aggressive Ocean Spray product placement, did you? The chefs get to run around a bog harvesting fresh cranberries, which for some of them is quite a challenge. Four svelte chefs come out on top, and get an advantage in the Quickfire: Gregory, Katie, Doug, and Adam.

Those chefs get to use fancy ingredients in their cranberry focused Quickfire challenge. Some of them manage to screw it up anyway: Adam’s dish falls apart and he makes it worse by talking about how bad it was. Others using the bad pantry do a great job — Mei cooks a sweet and sour pork that everyone loves.

But someone with an advantage does win the challenge: Katie, the ho-hum food teacher, who creates a cranberry borscht. With Aaron gone, Doug steps up to make fun of her choice to make a borscht — and then to look totally embarrassed when it beats his dish.

And then there’s Stacy. She’s from Boston. Have you heard? Because they won’t stop mentioning it, even though you can already tell she’s from Boston the moment she opens her mouth. Yet again, she finishes on the bottom — and berates herself for not being able to use a local ingredient like a cranberry. “I’m so pissed. Cranberries are what I use all the time. I’m really getting tired of being on the bottom all the time.” One of the problems with Top Chef is that it can sometimes seem transparent, thanks to editing, who is going home — and it’s starting to feel like things are not gonna end well this episode for Stacy. It gets more foreboding when we see her on a tearful Skype call with her deployed Marine boyfriend.

The chefs pack up their knives and drive down to Plymouth (spelled Plimouth when referring specifically to the plantation) where they cook using only what was available in the 1600s for Native Americans and descendants of the Mayflower boat. There’s no turkey, but there’s a bunch of other delicious stuff: clams, lobster, venison, rabbit, and… goose. Almost turkey, but it’s goose. The goose will present a problem, because it’s very lean and hard to cook with but Gregory — who never really struck me as a traditionalist — decides to cook it so there’s a bird on the table.

Despite all the challenges — smoke flying into their eyes, dirt on the ground, no forks — the chefs turn out some dishes I would love to put on my Thanksgiving table. Katie, who has immunity, makes blueberry stuffing topped with lobster that sounds weird but delicious. Doug roasts a rabbit on a spit and pulls it apart since the judges will only have spoons. Mei does a duck fat roasted cabbage and trout vinaigrette that earns raves. Katsuji ends up winning the challenge with a lobster and butternut squash dish that people can’t stop eating. This episode made me wonder why there’s not more seafood on my Thanksgiving table. Who knew you could throw some lobster squash or stuffing and it would be amazing?

But even as the judges liked every dish they ate, someone had to lose. Gregory’s goose was chewy, not cooked quite long enough to get it tender, and generally problematic. It’s an unusual space for Gregory to occupy, and the judges seems pretty willing to forgive him for it, even though it seemed to me that they liked his dish the least.

Melissa makes a vegetable dish, with no protein, and they don’t think she cooked her zucchini enough. I’m not sure what she was thinking, and they found her dish flavorful but a bit forgettable — a pretty big sin. If anyone’s dish was less popular than Gregory’s, I thought it would have been hers.

But then, Stacy. Stacy makes a clambake that the judges actually really like. There’s a toss aside comment that there’s some strange flavor on it, something musty, dirty. But for the most part, they really seemed to enjoy it. “Remember the other day when I said you had to dirty up your food? This is what I was talking about,” Tom complimented her as he ate it.

And so the one thing I didn’t like about this episode was the elimination. Sure. Out of all the remaining chefs, Stacy is definitely the worst. But during the dinner, her dish didn’t seem to be the worst. The judges seemed less satisfied while eating both Melissa and Gregory’s dishes. It seems more like they learned to dislike Stacy’s clams in retrospect, claiming it tasted too dirty, when they realized the only other people they could knock out were all-star Gregory or middle-of-the-pack-but-better-than-Stacy Melissa.

So it’s Stacy who goes home, with the maybe-comforting knowledge from Tom that they did actually like her dish, even as it got her eliminated.

With Stacy gone, there’s no more hometown hero (a pressure she’s glad to have off her shoulders). There’s also no more weak link — no chef who has consistently been struggling, with the possible exception of the bubbly Keriann. The eliminations are likely to get even more controversial, but what would be the fun of Top Chef if we couldn’t complain the judges were being unfair? The judge’s table drama — even diminished with instant decisions — is as much a part of Top Chef as a Thanksgiving episode, or telling through the edits who is going home. And even if I didn’t think it was quite fair, it’s part of what made the episode work.

Besides, nobody wanted to see Gregory go home, anyway. 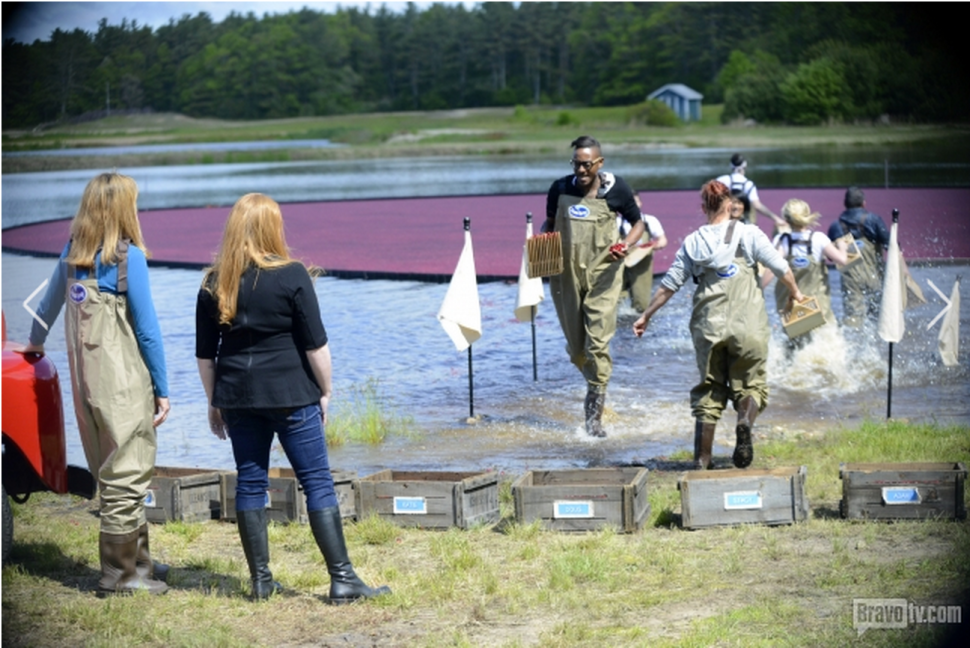