Watching this season of Top Chef is like reliving the times my parents visited me while I was a student at Boston University — a relentless rundown of every one of the city’s tourist attractions and history lessons, done mostly because you feel like you kind of have to do it.

Yes, after visiting Fenway Park and the Museum of Science and offering up lessons on Paul Revere and the Boston Tea Party, this week Top Chef continues its march along the Hub’s Freedom Trail, with the stop every college kid’s dad wants to make first: Cheers.

But unlike when I went to Cheers, this time George Wendt — Norm! — is sitting at the bar with Padma Laksmi.

“I may have been asked to leave Cheers once,” the local Boston chef’testant, Stacy, says. I hear you, girl. I was once asked to stop dancing on a table at T. Anthony’s, a Boston pizza place. It’s just the kind of city where you get kicked out of places.

The chef’testants are visiting the Beacon Street location of Cheers, where a bar formerly called Bull and Finch served as the exterior shot on the show and has now been re-named Cheers because, you know, branding. The inside does not look like the bar on Cheers, because that bar not real, but a television set. If your dad would like to drink in a place that looks like Cheers inside, you should bring him to the Faneuil Hall location, where they’ve built a replica. You’ll have to go to Faneuil Hall as you make your way through Boston’s tourist spots, anyway — and I’m sure Top Chef will get there soon.

At Cheers, the chefs are tasked with cooking bar food for Wendt. After a series of huge wins, Gregory totally botches sliders, losing his buns and toppings on the way out of the kitchen before telling George Wendt he had a crush on Woody Harrelson. Wendt doesn’t like the sliders, but offers up some comfort: “That’s ok, Woody’s a vegan anyway.” Also on bottom is James, the guy with the Swayze tat, who made a weirdly purple carrot and bean dip situation that didn’t feel like bar food to George Wendt, and I think George Wendt knows bar food, ok?

After crying at the top of the episode about how bad she’s doing, Keriann is among Wendt’s favorites — but it’s Katsuji, who has vacillated between being great and terrible, who wins the Quickfire. And he’s super lucky he did — because it comes with immunity in a dreaded double-elimination challenge in which he actually ends up making a pretty crappy pasta dish.

Finally, we get a main challenge that isn’t super aggressively Boston-themed. The chefs head to one of Michael Schlow’s Italian restaurants, where they work in teams of three to create a three-course Italian menu. Each team gets to write up a menu — and whichever team has the menu that gets ordered the most wins and is safe, while others can be eliminated. The menu challenge gives us some interesting insight into what makes menus attractive (words like “seared” and “scallop,” apparently).

The chefs can pick their own teams, and still some people who hate each other somehow wind up on the same damn squad. Of course, that’s sort of bound to happen at this point because pretty much everyone hates Aaron. He and Katsuji have been sniping at each other of late and — surprise — do it again, but third teammate Gregory plays mediator and calms them down (which I’m sure Woody Harrelson would admire!). They go on to win the challenge, no thanks to Katsuji’s bad pasta. Aaron cooks a tasty scallop (one of several scallop dishes in the main challenge, reminding me of Fabio’s “This is not Top Scallop” line of yesteryear) and declares he can work on a team, after all.

Also, surprise twist: the chefs are cooking for Emmy Rossum, who is both adorable and gluten-free. It’s an Italian challenge with a pasta course! The chefs get told at the last second and must get creative and kind of hate it, but then at the end it’s Emmy Rossum, so it’s not like they can really complain.

But now, on to our losers.

James makes a classic Top Chef mistake and agrees to make a chilled shrimp salad, even though he really wants to make lamb. If the Simpsons has taught me anything, it’s this: “You don’t win friends with salad.” Especially when Tom dismissively says your dish is like shrimp cocktail with mandarin oranges.

Then there’s Rebecca, who makes a bland scallop and charred fennel dish. The fennel isn’t really charred, and the whole dish is sort of bland, like Rebecca — whose name you probably do not know because she’s been pretty boring.

Stacy, the Boston chef, overcooks her veggies and slices rib eye too thin — but she lives to see another day in her hometown (how convenient for the show’s narrative).

It’s James, who was also at the bottom during the Quickfire despite the powers of his mystical Swayze tattoo, and Rebecca who are heading home — with Tom saying both dishes were ideas the chefs got stuck on but couldn’t execute or jazz up appropriately.

And it’s on to the next stop on our tour of Boston. If the chefs really were recreating my freshman year visits, they’d probably be cooking on a duck tour boat next. But lucky for them it’s almost Thanksgiving — and they’ll shift gears from tourist traps back to history lessons with a visit to a pilgrim colony coming up soon. 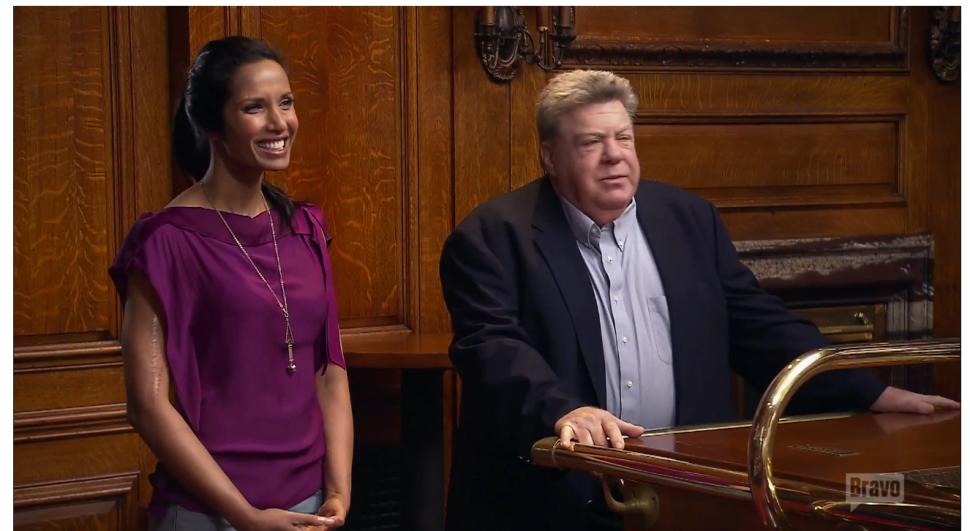