Back in the day, television writers would get feedback about their shows in one of two ways: from the occasional review in a publication, or from the ratings. Then around the late ’90s, shows like The X-Files and Buffy the Vampire Slayer ushered in an era of fandom; viewers were empowered by the Internet and its burgeoning fandom communities. Note that the people who were early adopters to message boards and listservs had a certain bias in what they favored: geeky, cerebral shows that rewarded vigilant, and recurring, viewings. Think Twin Peaks. Think, later, and for another generation, Lost. Think what we’ve come to understand as the (new) Golden Age of Television, co-created equally by its writers and its most passionate fans.

Today, the Internet is full of such super-fans, and sites like Tumblr make it easy to share fan art and fiction about favorite characters. You can’t go a day on a blogging platform without seeing a short loop of images from Sherlock, Doctor Who, Supernatural or Hannibal, if not all of them. Dozens of newspapers and websites, including this one, publish recaps that dissect the previous evening’s best programs. But do these fandom communities actually translate into better ratings? And how much do the creators of these shows take their fans, and what they want so vocally, into account?

The surprising answer: Not much. While television viewers have never had an easier time banding together and voicing their opinions on the programs they love, TV writers and showrunners say sweeping changes in the way that television is being delivered are actually drowning out those voices. For good or ill, keep typing—but nobody may be listening.

Surprisingly, new formats and new ways of delivering story are actually taking power out of fans’ hands. House of Cards issues an entire season all at once, on Netflix; when viewers see the first episode, the last is already finished. “Usually by the time we launch a season, I’ve already poured over these episodes dozens and dozens of times,” said Beau Willimon, showrunner for House of Cards. Though he frequently engages with fans online on social media, he said he rarely reads the increasingly ubiquitous recaps. “One thing I definitely don’t do is look to connect to any social media or articles or commentary in a prescriptive way as in, ‘We should add X.’ That has to be a discovery, and to approach it in any other way is pandering or schematic. We have to do exactly the opposite of what the audience is expecting.”

Since House of Cards is a long-format show not beholden to pressures from advertisers, Mr. Willimon may be speaking from a uniquely privileged position; one that bears more resemblance to the film industry than to the traditionally populist medium of television. TV—or whatever you want to call it—is no longer the bastard cousin of cinema. Series creators and showrunners are now their own form of auteurs, spoken about reverentially in hushed tones once reserved for Coppola and Von Trier. And auteurs don’t write by group consensus.

“This is an art project! We’re going to be making it to our standards,” said Ben Sinclair, co-creator of High Maintenance, an acclaimed streaming series about the various clients of a weed delivery guy in New York. While Mr. Sinclair and wife and co-creator Katja Blichfeld started off uploading episodes onto the streaming service Vimeo as a “calling card” for commercial projects, in June Vimeo announced it would be funding the series as original programming. The show has amassed a cult following online, but Mr. Sinclair and Ms. Blichfeld insist they aren’t influenced by that. “We write very much in a bubble, we don’t incorporate fan’s reactions at all.”

Showrunners and writers want to keep fans happy, of course: direct fan engagement within the world of the show can be very lucrative. The mass market consumerism of “fandom” is, as anyone who has ever attended a Comic Con can attest, no small matter. But while ratings-guru Nielsen began keeping tabs on the social media presence of shows in 2013, there isn’t a direct correlation between how well a show is doing and how much social media attention it’s getting … and on what platforms it’s receiving buzz. The TV show GIRLS is cited, discussed, and critiqued far more than the CBS show Two Broke Girls, despite the fact that Two Broke Girls brings in approximately 8 million viewers per episode, while the season three finale of GIRLS clocked in at 632,000.

And there’s a big gap between a show acknowledging its fandom externally—through social media, say—and having the audience dictate where a series’ narrative should go. The program Sherlock famously altered story in response to its fans; it spent the first episode of its fourth season mocking online “shipping” culture—the desire of fans to see two characters develop a romantic relationship.

“I don’t think Sherlock started out with homoerotic undertones, but it gained a huge traction on Tumblr where fans shipped Watson and Holmes, and then the creators wrote [those undertones] into the show,” said Louis Peitzman, a senior entertainment editor at Buzzfeed.

But the writers seem to have resented the fans’ input. In the same fourth season premiere, the creators introduced a fandom clique within the story: A group of obsessed followers (comprised of crackpots, nerds, and an overweight goth woman). They sit around and speculate about how the detective escaped the previous season’s cliffhanger.

“A nod to the fans can be nice, but it can also offensive, like they’re using the fandom against them,” said the Buzzfeed editor. At its best, it’s pandering, and at its worst, it’s mocking a show’s most ardent supporters.

Too many in-jokes about or directed to hardcore fans can also be alienating to infrequent viewers, or to those who just don’t feel like paying all that much attention. Take Community on NBC for example: for all its devoted cult following and obscure references to its own mythology, the series was canceled several times by NBC, showrunner Dan Harmon was fired and then brought back, and the ratings tanked. NBC eventually dropped the show.

Mark Goffman, executive producer of Fox’s Sleepy Hollow, consciously tries to walk a line between catering to fans and keeping what they want out of the writers room. “I don’t know that necessarily we are changing story lines or even putting in dialogue, but we try to find little Easter eggs that they are going to pick up on, to reward people paying close attention, to give them something to talk about. As opposed to trying to necessarily address like, ‘When are we going to see more of Jenny?’ or ‘When are Abbie and Crane going to hook up?’ ”

Mr. Goffman and his writers have created exclusive online-only content—“creative augmentations of the show,” according to the producer—that feeds into the story lines of Sleepy Hollow, yet are not essential to understanding the plot. Last season, the show put out a History Channel-type spoof online that purported to tell the secret history of George Washington, one in which the first president not only fought against the British, but dark supernatural forces as well.

“So, it has really been something that we have embraced, and we live tweet with every episode. I take photos as we go, of different set-ups and behind-the-scenes shots and even … the three- or five-second videos that we can then post as GIFs. It gives people an additional element to enjoy,” said Mr. Goffman.

And in a way, having fans weigh in with what they think should be happening on a show is a sign of the old system, not the new one. Executives at networks have traditionally sent out surveys to a cross-section of viewers, asking for input about specific elements of a series: would they want to see the quirky lead hook up with the cute boy from the coffee shop? Or is she more relatable with her slacker boyfriend and a side business making meth?

And while this model is still alive and very profitable, one of the most important shifts we’re talking about when discussing Television’s Golden Age (2.0) is the move away from that corporate pressure. Ratings still matter, but they matter less if you are on cable or premium cable or Netflix. (And perhaps why Community has been resurrected for another season as part of Yahoo’s new streaming series, while Twin Peaks, originally canceled by ABC, will be coming back in 2016 to Showtime.)

And if at one end of the spectrum you have CBS primetime and the other Vimeo web series, the middle would perhaps be the rise on television of mini-series like American Horror Story, True Detective and Fargo. Much like House of Cards, the appeal of these shows is partly that they have self-contained, shorter seasons, meaning that the entire package is usually written and shot by the time the first episode airs. The Internet will have the reaction it has, but by the very nature of how these emerging shows came to be (and the nature of the people who created them), no amount of letter-writing campaigns, fan-made GIFs, or “shipping” stories on Tumblr will be able to change the narrative.

Of course, the level of engagement of a TV writer to the fan base of his or her show is still much higher than it used to be. But “I tell my writers, just make what you think is great story. What is the best version of that?” said Danny Strong, whose new show Empire premieres on Fox in January.

Or as Mr. Willimon put it, “Your goal is to please yourself, first and foremost. And scare the shit out of yourself—take risks. Flirt with failure. I think that trying to give the fans what they want or what they ask for is the opposite of that.” 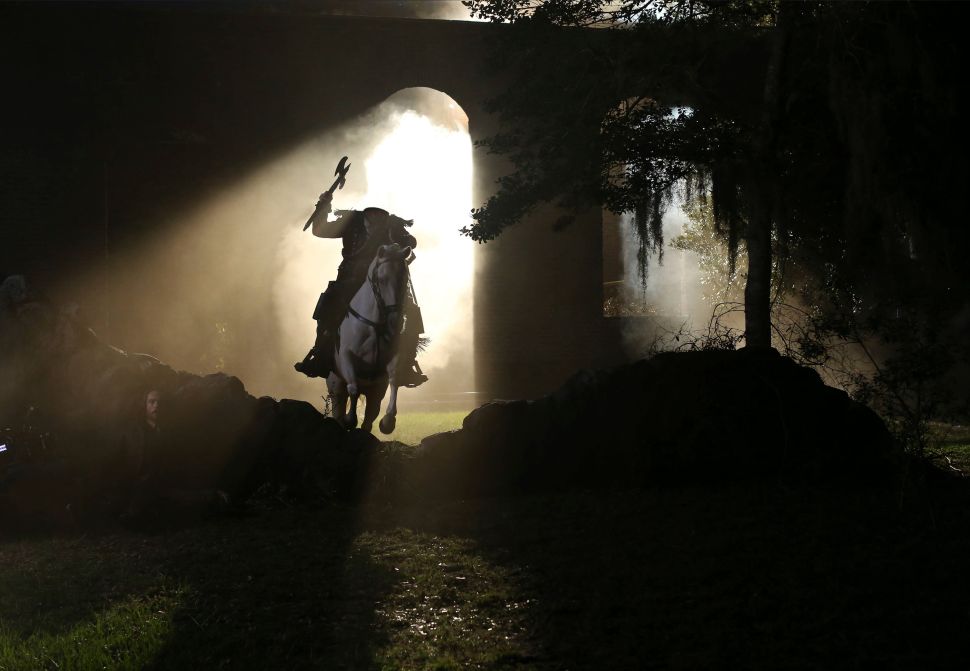