“Location, location, location” is not just the mantra of realtors, but also for those studying social behavior patterns. Apparently, the pulse of a region can be inferred from concentrations in a region, or at least that’s what a group of researchers from New England Complex Systems Institute asserts. In a newly released study entitled “Visualizing the ‘Heartbeat’ of a City with Tweets,” they sought to analyze the behaviors of New Yorkers via their locations using Twitter.

According to MIT Technology Review, the researchers compiled data from 6 million geolocated Tweets from August to September 2013. By comparing time and location, the study intended to map the behaviors of New Yorkers. The result? The city’s sleep cycle shifted back three hours on weekends, where Tweeters are presumably sleeping in, instead of using their phones. Weekdays had a “pre-commuting peak” of people using their phones in residential areas before they leave for work in Manhattan. Areas of high activity included early morning arrivals at airports, and Sunday afternoons spent in Central Park or at the Meadowlands Sports Complex.

The research team created a short video to provide more insight into the behaviors, posted on YouTube by Discover Magazine. The areas of high activity are indicated in red, while low activity is indicated in blue.

The data suggests that the main activity during the workday is in Manhattan. In other words, those of you Tweeting at work have just been caught. 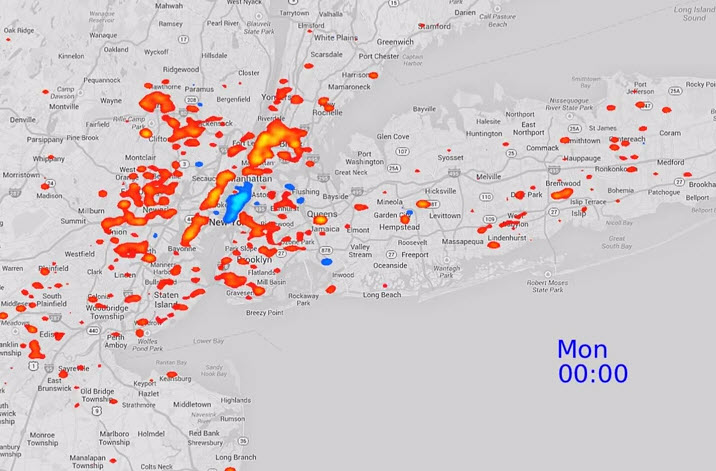