With Reuters reporting Friday that Ukraine has accused Russia of sending a column of 32 tanks to reinforce pro-Russian separatists, the simmering conflict appears to be coming to a boil. And now, The RT Channel—a mouthpiece of Kremlin propaganda—seized the opportunity to report on a slightly more colorful bit of collateral fighting in the clash between Moscow and Kiev, this time over a full-breasted “Crimean.” These reports are filled with either joy or despair—depending on what side of the conflict they represent.

Mia (Maria) Zarring, the 28-year-old owner of the fabulous bosom pictured here first became famous in 2011 when she won an all-Ukrainian T-shirt contest. Before that, she was a TV correspondent, wrote poetry and penned a column for kid’s education in the local newspaper.

This year, Ms. Zarring, who always believed that the road in life should be led not by the breasts but by the heart, was just declared to be the top “natural beauty of Russia.” In the opinion of Kiev, this decision was of political character because before moving to Moscow, Maria had lived in Crimea, which until earlier this year was part of Ukraine.

Stakes and passions run very high because it looks like Putin is determined to keep not only Crimea but Ms. Zarring’s boobs, too. According to RT, Ukrainian commentators are convinced Russia is trying to “humiliate the Ukraine” by choosing Ms. Zarring, accusing Moscow of “appropriating” its achievements. The piece quotes “Kiev beauty expert Oksana Melnik,” who says, “[The Russians] have only chosen her to rub our noses in it. Moscow is laughing at the Ukraine by claiming one of our own success stories for their own.”

The story is being followed with eagerness in Europe (The Daily Mail referred to Maria as possessing Weapons of Mass Distraction”) and now some in Ukraine are even suggesting that the breasts are not real. Russians fired back that Ms. Zarring’s magnificent breasts are natural and they were given to her not by Ukraine, but by her mother and grandmother; they belong only to her—and Russia!

Ms. Zarring, for her part, says that before she was 20 she never noticed any unusual interest in herself from representatives of the opposite sex, who never looked at her breasts but only at her eyes. She says that she likes men but only those who do not adore her too much. A struggling actress, Ms. Zarring states that she is proud of her body, proud of her title and proud of her country. According to the story, “Maria herself, the owner of the bust of the 12th size”—that translates to something like a cup size 34N in American measurements—”now lives in Moscow and, in her own words, is not interested in politics.” She is divorced now and has moved to Moscow.

At the end of the day, no matter the outcome of the Ukraine-Russia international conflict, it looks as though Ukraine has forever lost two of her most treasured assets. 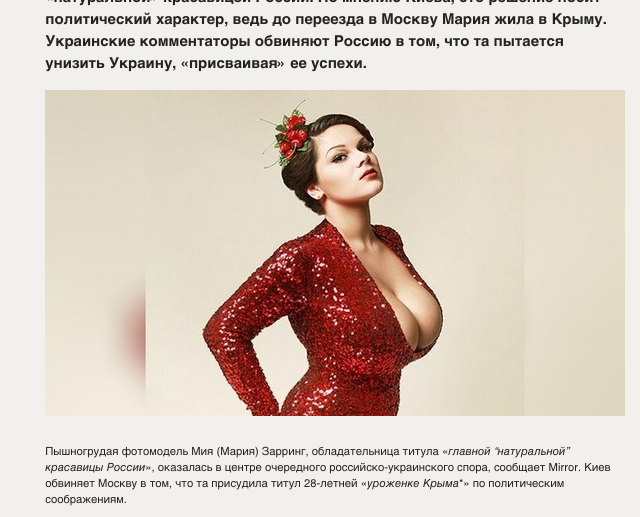