Soho is primarily a neighborhood of modest rooflines; its cast iron beauties provide enviable vantages for observing the shopping habits of moneyed tourists, but for the most part, the neighborhood’s housing stock lacks the soaring city vistas to which luxury buyers have lately become accustomed.

Which gives One Vandam, or rather 180 Avenue of the Americas, which rises above its neighbors at the intersection of Sixth Avenue and Spring Street, a very literal leg up. (This thanks to the miracle of air rights, sold by Gods Love We Deliver to Quinlan Development Group and Tavros Development Partners.) Its three penthouses, in particular, enjoy not only city views but the copious terrace space to really make the most of them. To wit, penthouse B, which just went into contract, has 880 square feet of terrace space, arrayed over two levels.

She declined to say whether or not the 3,400 square foot duplex penthouse, with four bedrooms, four baths and two fireplaces, had fetched its $15 million ask. The contract had been signed for “a very compelling price,” she equivocated.

Ms. Turner also declined to identify the buyers, but said that they are from the U.S. and that “this will be their New York home.”

The timing of the contract is somewhat auspicious, as the building’s glass and limestone facade is nearly finished and brokers just started taking people inside, according to Ms.Turner. The interiors remain rudimentary, of course, but being able to gaze out over one’s potential visual domain can be very persuasive when it comes to closing a deal.

The 25-unit building, designed by BKSK Architects, is approximately 70 percent sold, according to Ms. Turner. Penthouse B, listed last fall when the building came to market, is the first (and least expensive) penthouse to go into contract. The other two penthouses—a simplex priced at $17.5 million and a just-released 5,200-square-foot duplex asking $28 million—remain up for grabs. All three boast abundant outdoor space and sliding window walls, allowing for a frictionless transition between interior and exterior, with none of the nerve-jangling banging of standard door procedure.

Interiors involve matte lacquer, heated marble, bleached walnut, oxidized walnut and wood from the Adirondacks—very much in keeping with designer Studio DB’s focus on local materials. This, in particular, appeals to Soho buyers, according to Ms. Turner, who like the idea of “crafted” interiors.

“The finishes are very fresh,” she continued. “It’s a very clean palate.”

Just not too clean: “When people come to us, they want big windows, but they also want warm and liveable,” Ms. Turner said. “They crave spaces that have places to put your furniture and hang your artwork. Many buyers have beautiful furniture and artwork and they want to show it off.” 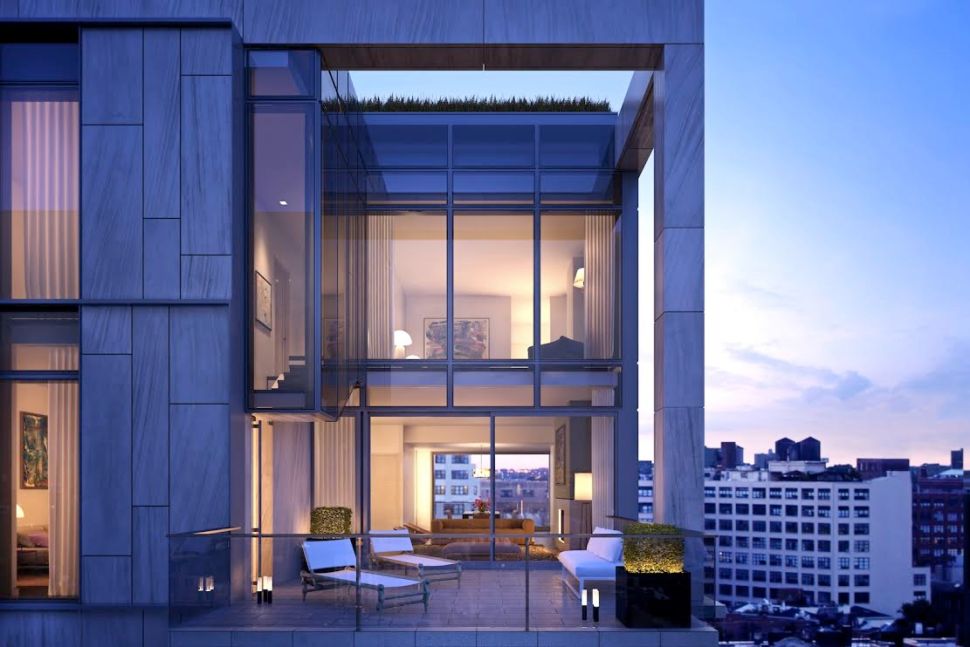