In typical MTV reality show fashion, Are You the One? involves packing an array of attractive twenty-something-year-olds into a house where they’ll proceed to party, hook up and form relationships. The latter, however, is the sole goal of this show’s participants, for according to a few personality tests, there’s another housemember who is a “perfect match” for everyone on the show. The group’s goal is for everyone to find their “perfect match,” and if everyone successfully pairs off, they win and will all leave the show with $50,000 each, and theoretically, true love.

The contestants’ drama-filled strategy of running around and fighting over each other like drunk chickens with their heads cut off isn’t working too well for them, though; with only two episodes left, they only know three of the 10 matches needed to win. But the show’s structure (which I’ll explain later) is basically a logic puzzle that is solvable with only a moderate amount of math. For the past few weeks, my two friends and I have dedicated our Monday nights to this show and a bottle of wine, determined to figure out the matches before they do. After the airing of last night’s episode,—the eighth in the 10-week series—we did it. I’ve never been more thrilled to say that spoilers lie ahead.

Here are the matches:

Now, to understand how we determined these, it’s necessary to understand the inner workings of the show. In the beautiful house in Puerto Rico are 10 men and 11 women, and each has one perfect match. (Sidenote: One guy is double matched with Christina and one other girl, which serves no purpose other than to make it more difficult than the first season. Whichever girl is confirmed a match with the guy first gets the man, and the other girl is kicked off the show). In each episode, the participants pair off and compete in a challenge. The three winning couples go on dates, and one of the couples is voted into the “truth booth” where they’re either confirmed or rejected as a perfect match. Later, everyone pairs off again for the matching ceremony, and they find out how many of the pairs are perfect matches but not which ones. They are to repeat this process for up to ten weeks or until they win.

On last night’s episode, the Are You the One? crew was disappointed to find out that they had actually taken a step backwards—getting only five matches when they had gotten six (their all time high) the week before. But despite their falter, we knew enough to call the matches for sure. Throughout the season, we’ve been keeping a handy spreadsheet of the possible match-ups, filling in perfect matches and eliminating pairings that definitely could not be matches as the information became apparent. We were able to learn more information than what became known for sure via “truth booths” and figure out the pairings before them by using deductive reasoning to eliminate possibilities, similarly to the way one would play the board game Clue. One of the main strategies here was looking at the many P implies Q situations. The other was testing out all of the possibilities and ruling out whichever sets of matches resulted in contradictions. 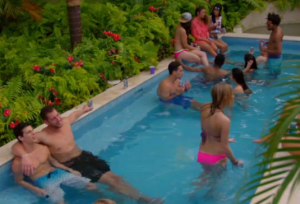 These strategies finally brought the pieces of the puzzle together last night. Going into the episode, we were down to four possible sets of matches, two of which, if true, would require that Nathan and Christina be a match. But this week’s “truth booth” revealed 1) they’re not a match 2) Alex and Jasmine have to be a match and 3) that only two possibilities for how the chips would fall remained. The matching ceremony brought the last clue. Either both Brandon and Tyler and Garland and Alexandria would be matches, or neither would be, which would imply that Dario and Ashley would have to be a match.

When it was revealed that the group had five perfect matches—three being the honeymooners who had already confirmed their matches and the other being Alex and Jasmine—we knew the last had to be Dario and Ashley. And that was it. Process of elimination left us with only the above set of perfect matches.

As they near their last chance at the money, last night’s episode made it clear that the show’s cast isn’t very close to figuring it out. Perhaps they should adopt our methods.

Filed Under: TV, MTV, reality tv, Math, Disruptions, Are You the One?