Pedestrians in the Flatiron District might have noticed something different about Madison Square Park today: namely, two large, inflatable igloos stationed at 23rd Street and Fifth Avenue, each containing the setting of a therapist’s office.

Those who waited their turn to venture inside the cozy-looking bubbles would discover that they wouldn’t be meeting face-to-face with a therapist — rather, they’d be texting with one.

The stunt was staged by TalkSpace, an app that lets you text with a therapist whenever you need help with your mental health. Founded in 2012 by Israeli couple Roni and Oren Frank, the app was designed to make mental health treatment more accessible, more affordable, and less stigmatized.

“By installing transparent domes, we want to say there’s nothing to be ashamed of,” Ms. Frank told Betabeat. “We all have issues — everybody’s dealing with something. It’s natural to reach out for help, the same way you’d get help for a physical problem.”

Before we took our turn in the bubble, we spoke with Ms. Frank about TalkSpace’s history. Ms. Frank, we learned, originally studied computer science and software development. But when she hit a rough patch in her life and started seeing a therapist, she instantly became fascinated with the world of mental health.

After obtaining a Master’s from the New York Graduate School of Psychoanalysis, Ms. Frank got to thinking: Of the 50 million Americans who are diagnosed with mental health-related illnesses every year, only a third of them — often due to high costs and the stigma associated with mental healthcare — ever get treatment. And with studies having shown that online therapy can be just as effective as traditional, face-to-face treatment, Ms. Frank wondered, “How come there’s no digital platform for therapy?”

“It made so much sense to me,” Ms. Frank said. “I’m going to build this platform. It was such a huge social vision, and I couldn’t let it go.” She convinced her husband, who formerly worked in advertising and marketing, to join her, and the two founded TalkSpace.

Today, TalkSpace employs around 100 therapists, who communicate with users in real-time, over text. Ms. Frank described the system as “asynchronous,” meaning a therapist might not respond to a user’s query immediately, but they’ll always respond at some point during the same day. Though a user might have to wait an hour to hear back, it’s certainly more immediate than trying to book a therapist for a face-to-face appointment.

Nicole Amesbury, a TalkSpace therapist who attended the Madison Square Park event, was drawn to the company because of the accessibility it offered to users.

“[Before TalkSpace] I was working in community mental health,” she said. “Where I live [in Florida], there’s a three-week wait for someone to get help when they’re discharged from the psychiatric unit. We have a system that’s broken.”

Now, Ms. Amesbury treats clients, via text, all over the world.

She pointed out, however, that TalkSpace’s costs were probably less than your average copay.

Finally, it was our turn in the bubble. We crawled inside the small opening, parked ourselves in the comfy green armchair, and picked up the iPad that’d connect us with our therapist. Within minutes, we were texting each other.

Conversations on TalkSpace, we should add, are anonymous and encrypted. We chatted openly with our therapist about the problems we’d been experiencing lately, including, but not limited to, “Is it possible that being on social media all day is making me sad?” (Spoiler alert: probably).

Our therapist’s responses weren’t immediate — it took a few minutes for her to respond to each of our messages. As Ms. Frank had warned us, your therapist won’t always be able to have a fast-paced, back-and-forth conversation with you. It’d make more sense to use the app, we figured, if we were busy going about our day, as opposed to sitting in a chair, with nothing to do but wait for a response.

Still, we definitely felt refreshed when we emerged from the bubble half an hour later. It was partially because our therapist had given us some good advice. But we also found that sitting still and comfortably in quiet bubble, watching the rest of New York rush busily around us, had unexpected therapeutic benefits on its own. 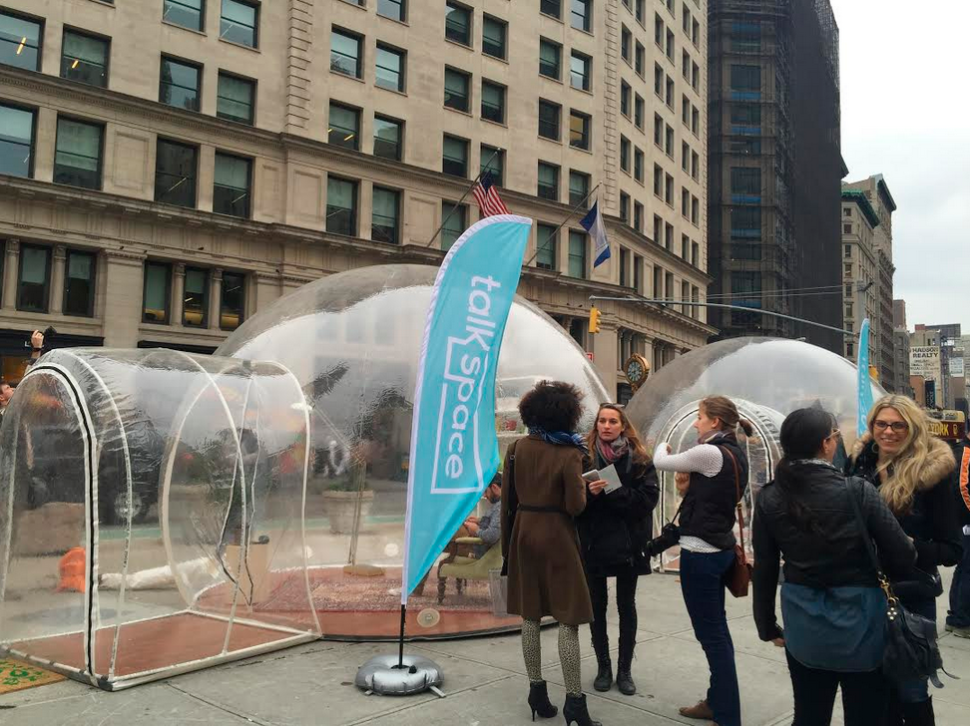