On a recent morning, a friend and I ate breakfast at a bakery on 5th Avenue in Brooklyn, in a gentrifying borderland that shrewd and/or optimistic real estate agents have taken to calling South Slope. We sat at a white marble countertop that runs along a front window looking across the street onto Green-Wood Cemetery, which makes ripe picnicking grounds for bakery patrons. The locale bore familiar markings of flux: Stumptown coffee, refrigerant cases of triple-crèmes and cured pork, bearded twenty-somethings in cardigan sweaters.

In the tradition of armchair liberals everywhere, I was feeling conflicted—insufficiently principled and excessively self-indulgent. For various reasons, the penury of freelancing prominent among them, I had moved a year earlier from one of Brooklyn’s most rarefied neighborhoods to one of its most far-flung.

It could take more than an hour to reach Midtown from my apartment in Bensonhurst. The polar vortex had been unsparing with those condemned to the neighborhood’s elevated subway platforms, and my partial response had been to avoid going outside pretty much altogether, huddling instead beside my radiator and consuming hours of third-tier HBO drama at a clip. If I’d wanted to, I could have bought live turtles from a local grocery store that catered to the Chinese, Eastern European and Middle Eastern émigrés that have largely supplanted Bensonhurst’s traditionally Italian population. Turkey bacon, on the other hand, could be elusive—a rumor passed among Ukrainian stock boys.

Still, hope flickered near. The term of my lease was nearing its end and the previous afternoon, I’d been to see an apartment near Prospect Park.

I could not deny that I was excited to move. True enough, I wanted to be nearer my office and friends. But there was something else. Something, or rather, a set of things, that were a bit, well, uncomfortable.

To be blunt, I wanted neighbors with French Bulldogs. I wanted to get on the subway in the morning and find people reading magazines to which I subscribe. I wanted to live within walking distance of several small-plate restaurants that refuse to take reservations, and I wanted the privilege of waiting two hours for a table. Perhaps most importantly, I wanted to drink herb-infused bourbon cocktails at brunch.

These were terrible truths to face.

My friend, though, who had lived all her life in rural Ohio before moving three years ago into the bakery’s ambit, did not find the situation problematic.

“I think that’s normal,” she said. “When I first got here, I was pretty homesick. I used to go to the Target at Atlantic Terminal, sometimes when I didn’t even need to buy anything. It has the same feeling as the one at home—that fresh-baked cookies smell.”

This seemed both counterintuitive and exactly logical.

We do not generally think of the proliferation of chain stores as a corollary of gentrification, exactly. Moneyed residents, after all, make much better boutique customers, and it is mostly those that can comfortably afford six-dollar lattes who become flustered at the arrival of Dunkin’ Donuts.

Nonetheless, it is a related process. Rising rents become prohibitive for independent shopkeepers, and it makes sense that a standardization of retail services would attend the socio-economic homogenization of neighborhoods once defined by ethnic enclaves. (Fairway, to the best of my knowledge, does not carry live turtles.) Too, there are the matters of convenience and competitive pricing, advantages appealing to most any New Yorker.

The ascendancy of chains has inspired countless community board presentations on zoning and square-footage restrictions, taxes and other sanctions—and no shortage of op-ed histrionics. In New York, though, their expansion has lately ebbed. According to the Center for an Urban Future, which conducts an annual survey on the subject, 2013 saw an increase of 0.5 percent from the previous year in the number of national retail locations in the city, the most insignificant growth since the survey began in 2008. (The number of locations in Brooklyn increased 2.8 percent, up from 2.6 percent the year before; Dunkin’ Donuts represented the most numerous chain, with more than 500 outlets citywide—a fact that yields a gnawing question: What Are You Drinkin’?)

All the same, none of this speaks to chain stores’ unlikely emotional resonance; it doesn’t quite address my friend’s use of Target as a kind of security blanket, a literal warehouse of the familiar. Seeking comfort, some sense of personal continuity in a new city before the rise of national chains, we might have frequented neighborhood stores or restaurants that reminded us of places back home. But with Target and Kmart on hand, such associative leaps have become unnecessary.

In passing through sliding doors, we can now near-literally revisit our pasts. (That fresh-baked cookie aroma, which appears mysteriously in a variety of malls and shopping centers, doesn’t hurt.) As one Yelper recently noted of Kmart’s Astor Place location: “Once inside, you do not feel like you are inside a store in Manhattan!”

Who knew time travel would be so mundane?

But even as the growth in New York of national chains has slowed, another development has gained momentum that shares to some extent in Big Box retailers’ quiet proffers of reassurance.

In ever-larger swaths of Brooklyn (portions of Manhattan, too, to be fair), independent retailers evince a peculiar sameness. These cafes, clothing and furniture stores, restaurants, bars, yoga and pottery studios have different owners—strangers, for the most part, to one another. But to visit them is to sense the influence of some secretive tastemakers’ guild. Both patrons and proprietors have made a fetish of the “curated.” Somehow, though, a great portion of the responsible curators arrive at suspiciously similar results.

We find the same raw Edison bulbs suspended over the same “salvaged” wooden tables. The same “craft” beers and locally distilled whiskey. In our ramen and in our street-food inspired tacos, we find the same pork belly, often enough from the very same farm. The boutique in Park Slope selling hemp t-shirts looks just like the one in Fort Greene, which cannot help but remind us of that cute little place in Brooklyn Heights. A veritable battalion of bartenders with vests, pocket watches, forearm tattoos and waxed mustaches has been loosed in “speakeasies” with pressed-tin ceilings. (It’s a look even the national chains have begun replicating.)

A host of trends ethical, economic, environmental, pop cultural and political might be identified to explain the current retail face of gentrification, which shows itself, too, in Philadelphia, San Francisco, Portland and elsewhere. But like the smell of baking bread—or cookies, for that matter—its offerings-cum-affectations also frequently recall a simpler time. They seem to cater to a longing for authenticity born of living in a Big Box world—a vestigial hankering for the comforts of soil and hearth.

There is also about them an appeal to the vanity of good taste; they assure patrons of their own sophistication, downplaying latent snobbery. To shop here, they suggest, requires true imagination! If Big Box chains can remind us where we have been, such ostensibly independent retailers seek to show us how fabulous we’ve become.

And yet, as such businesses multiply, they become scarcely more distinguishable from one another than Applebees is from T.G.I. Friday’s. What was novel in small doses feels contrived writ large. Even in instances of apparent earnestness, it has become difficult to use the word “authentic” with a straight face. (This phenomenon, I suspect, was not far from my colleague’s mind when not long ago, she declared Brooklyn “officially over.”)

Why, then, breakfasting in a corner of the borough that seems intent, like others before it, on shedding its character in favor of another already badly overused, was I so eager to leave my neighborhood just north of Coney Island, which remains colorful and diverse and populated (like New York of old) by recent immigrants? Why do we keep flocking to areas ever more expensive and undistinguished?

A good portion of the answer seems to be that residency in certain Brooklyn neighborhoods has come to stand for proof of realized cultural aspiration—however ersatz the culture in question.

In a recent essay, the Princeton professor Paul Starr considered what has elsewhere been termed our “individualist age,” a concept that seems to explain, to some extent, the above goings-on: Since the 1980s, “Everyone implicitly claims the right to be considered a star, an expert, or an artist.” Mr. Starr continues, “…no society could possibly satisfy the desire of everyone to be a star, but…singularity is the basis of human connection: ‘The difference that defines singularity binds a person to others; it does not set him apart. It arouses in others curiosity, interest, and a desire to understand.’”

If in their efforts to distinguish themselves, to “grow their brand,” Brooklyn’s denizens—and from these I cannot exclude myself—end up looking more and more the same, it is perhaps largely because of the unpleasant fact that not everyone can be a star—and because the personal risks necessary to realize real singularity, at least in creative fields, tend to make paying local rents rather difficult. Much easier, much more straightforward is to be “extraordinary” in a way that others have already found lucrative and, supposedly, self-actualizing.

Our need to yoke personal stardom and financial stability goes some way, then, toward explaining the winking agreement that has lately allowed the app designer and the Old Spice copywriter to be categorized as artistic workers. It is an arrangement that enacts a frictionless—if nonsensical—democracy of exceptionalism. How better, after all, to pursue our need to be understood than to surround ourselves with neighbors whose curiosities, interests, desires and career choices do not challenge—and mostly reflect—our own?

Everything that rises, it seems, must converge. 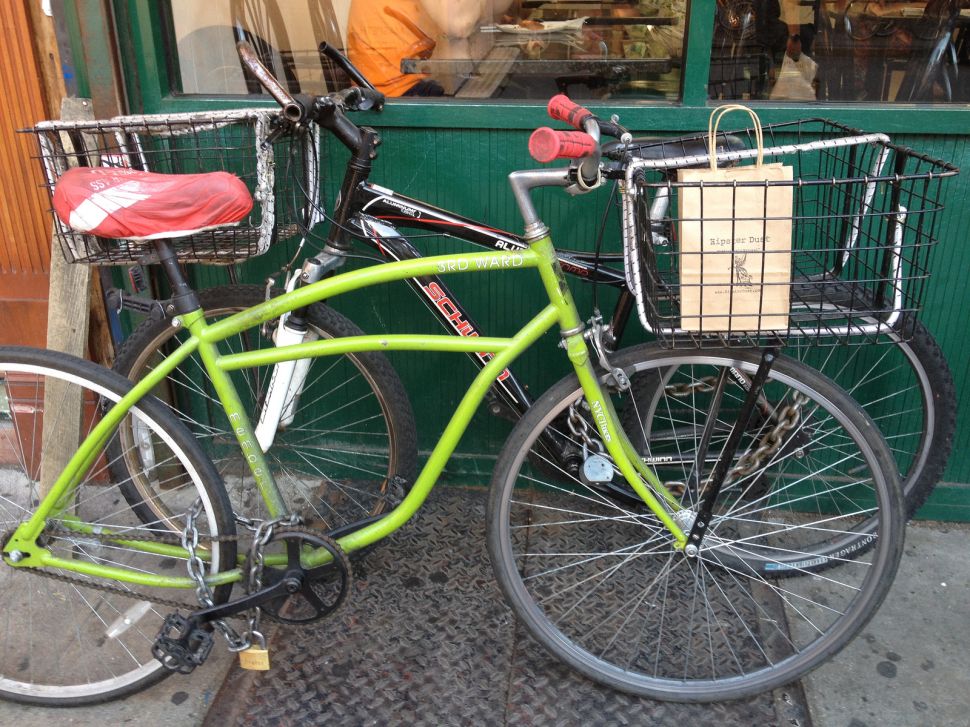