Well, this is terrifying, if true.

Two UK women are claiming their Halloween selfie at a London bar was photobombed by the ghost of an old woman, the Mirror reports. The so-called ghost appears to be an elderly woman in Victorian-era clothing, the women observed.

The women, Victoria Greeves, 22, and Kayley Atkinson, 23, reportedly took the selfie, then sent it to their friends on Snapchat. They later noticed their ghostly companion, and deleted the photo from their phones.

“I uploaded the picture to Snapchat and thought nothing more of it but later that night Kayley rang me in a panic and told me to have a closer look,” Ms. Greeves told the Mirror. “She said there was a figure in the background, and I am quite skeptical about things like that so I just laughed at the time. But when I looked back at the picture I could not believe what I was seeing. It is terrifying.”

Of course, there’s also a possibility there’s nothing spectral about this selfie. After all, it was taken around Halloween — if there’s ever a time that a spookily-dressed person might accidentally appear in the background of your photo, that would be the time. It’s also possible that the selfie was photoshopped. And isn’t it suspicious that both girls deleted the photo from their phones?

But Ms. Atkinson denied those possibilities, claiming the bar was “dead” — pun intended? — and that there wasn’t anyone around to have photobombed their pic.

“The bar was dead when we went in,” she told the Mirror. “It was only when I got home later on that I noticed the photo. I couldn’t believe it.”

“A lot of people have said we must have photoshopped the picture, and I can’t blame them, but neither of us would even know how to do that,” she said.

Hey, there might be some validity to their claims; after all, old people’s ghosts seem to be oddly selfie-obsessed lately. Last summer, if you’ll recall, a Romanian woman claimed her dead grandmother sent her a creepy selfie from the afterlife while she was unsuspectingly making some donuts. 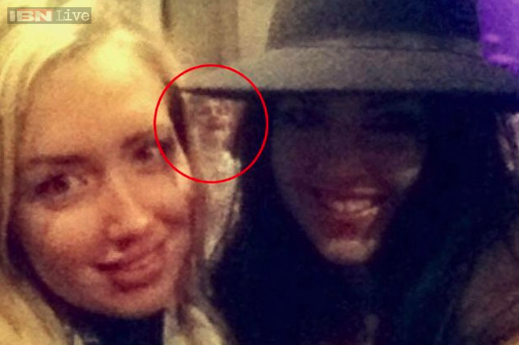