Writing a 50,000 word novel in 30 days might seem like a daunting task to many, but the New York City participants in National Novel Writing Month—lovingly called NaNoWriMo or just NaNo, for short—don’t seem to think so. About thirty of the city’s over 20,000 participants took over the tables in the Tribeca Whole Foods Café at the end of last month, and the atmosphere was surprisingly relaxed.

“Yeah, not much writing gets done at write-ins,” laughed Alexis Camp, gesturing towards the three talking tables they’ve filled. She and another Municipal Liaison (ML), Clarice Meadows, organized that Sunday’s event and 25 others like it throughout the New York region during November. As ML’s, they volunteer as event planners, community organizers, and personal trainers for the literary marathon’s participants, all the while writing novels themselves.

Grant Faulkner, executive director of National Novel Writing Month, a 501(c)(3) nonprofit, calls NaNoWriMo “one part mountain climbing, one part marathon, one part rollicking party, and one part parade.” It’s a daunting task, one that Mr. Faulkner says you need to train for. But it’s also a celebration to commemorate the completion of a task that isn’t easy.

Part of that training is to break the huge word count into manageable chunks. Another, says Mr. Faulkner, includes getting rid of your “inner editor.” He explains: “We say banish your inner editor and just plunge in and write, because you can’t edit a blank page. You’ve got to get that first draft out.”

In order to “win” NaNoWriMo, that first draft must be 50,000 words in length. In 1999, founder Chris Baty wanted to write a novel, and decided, based on the size of the books on his shelf (novels about the size of The Catcher in the Rye) that 50,000 words seemed like a doable goal to write in a month. He recruited 21 of his friends, and the ones who wrote with him in coffee shops were the ones who finished their novels. News of his idea spread, and since then, the number of participants swelled to nearly 400,000 across six continents. The nonprofit is free to join, and has expanded its support services to a Young Writers Program in schools.

Permitting bad writing—Mr. Faulkner calls it writing with “exuberant imperfection”—hopes to open doors for new ideas and possibilities. But it has also brought criticism, most notably from Salon, who argues that the dearth of readers is more of a problem than lack of writers.

However, Ms. Camp doesn’t understand the criticism. “Their idea is that all of the books come out of it are bad and there are enough bad books,” she said. NaNoWriMo alumni include a few bestselling authors, including Sara Gruen’s for Elephants and Erin Morgenstein’s The Night Circus.

A few of the writers in Whole Foods have been published, or at least hope to, but many express that for them, it’s more about the creative process and community. One participant moved to New York this year and knew she’d find friends by joining NaNoWriMo. Ms. Camp told the Observer of one woman from Denmark who moved to New York for the month of November just for the community.

Other regions include entire states, even whole countries—“Germany always beats us with word count, but that’s because it’s the whole country against us,” said Ms. Meadows. But it’s more difficult for these areas to hold events, since they’re so spread out. The ML’s in large regions are forced to hold their events online, rather than in person.

Ms. Camp and Ms. Meadows counsel their community in person and via “pep-talk” emails. Ms. Camp suggests that writers should ignore the idea of “winning” and set their own goals. “The 50,000 word goal is arbitrary,” she said, although no prizes are given for 49,000 words. While writing in Whole Foods, she finished her novel but was shy of the word count. Another participant was just starting that day, which the ML’s said happens more likely that one would think–usually at their final event of the year, which Ms. Camp calls “The Desperation Libation, a New York Tradition.” Participants meet in a bar on November 30th to finish their novels, and have a few drinks in the process.

Now that November is over, the New York community uses their independently formed writers’ groups to continue their creativity and edit their work. Officially, the winter months are part of a budding NaNoWriMo program called “I Wrote A Novel–Now What?” to help writers edit their work for publication.

However, Mr. Faulkner stresses publication isn’t the only goal of National Novel Writing Month: “We like to think that we have established creative momentum in their lives so that they can be creative year round, and be a writer year round.” 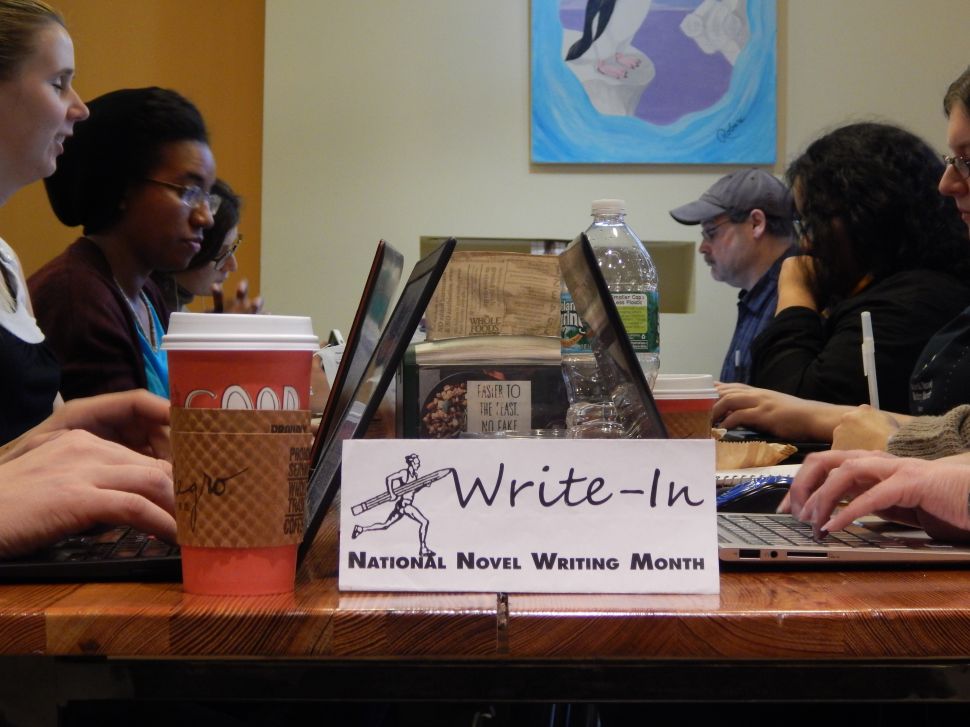