When I opened the door to the towering steel edifice at 431 E. 6th Street—a former ConEd power station dating back to the 1920s, and later the home of minimalist Walter de Maria, where he worked right up until he died last year—it was completely empty.

What he meant was, I was the first person at the first show in the new chapter for the de Maria House. I was perhaps the first civilian to see the de Maria house since it was put on the market following the artist’s unexpected death from a stroke, and then it was purchased by collector Peter Brant. I was naturally curious about the building, as de Maria was notorious about keeping it private—he had one-way windows, shades, and secret entrances—so passersby simply thought it was this old power station. I’m often one of those passersby, as I leave a few steps away.

And so when I received a slightly cryptic email with no context or fanfare (Subject: “de Maria.” Body: “You gonna swing by?”) well, color me intrigued. Clearly Gagosian is involved, but which artist? Who would have the honor of inaugurating what could become one of the city’s premiere downtown art spaces?

After trekking through the snow to the corner of 6th Street and Avenue A (which is, um, my corner) I found that gigantic structure, walked in, and hiked up the stairs to find a room the size of an airplane hanger, seemingly the size of a city block, with cigarette butts and bottles strewn about the room, as if some punk kids had snuck into the space and thrown a massive rager with all their buddies and were too hungover to clean up. But then upon closer inspection… wait, aren’t those the same Dan Colen hand-painted cigarettes we saw at the Karma Gallery booth at Nada?

They were indeed the cigarettes and bottle sculptures by Dan Colen. But while they were amusing in a booth at an art fair, they it makes more sense to see them scattered through this most monstrous of spaces, more and more cigarettes all over the three floors. On the walls were large works involving cheap chrome studs—the kind you can buy at Trash and Vaudeville a block up—assistants had installed the studs on canvases to achieve a shimmering glam rock feel.

The show is up for another week and a half, and it’s worth coming just to check out the space for the first time. So far, Mr. Brant hasn’t really touched the place, meaning it’s the same super minimalist building that de Maria designed. As he transformed the ConEd station into a place to work and live, the building itself became a de Maria. The closest equivalent, perhaps, is Donald Judd’s house at 101 Spring Street. Like it, 431 East Sixth Street is a minimal masterwork, with everything ripped out and exposed: pipes, vents, sockets, ladders, tubes, glass. On one floor a stove is pushed into a corner. On another, there’s a toilet and a sink that still has a bar of soap in the soapdish. There are crane hooks hanging from the ceiling. It’s essentially still the abandoned ConEd station.

Which explains why those in the neighborhood would stroll by unaware that massive de Marias were being built within these walls. Even Mr. Colen didn’t know. When we saw him later last night, for the proper opening reception, he said he lived in the abutting building with Ryan McGinley—he moved in months before September 11, 2001—but didn’t know what happened inside the big place at 431 East 6th.

“I’ve been looking at this place for 20 years, thinking, ‘What is this place?” he told me. He looked around at the regular crew of fellow artists and friends accidentally nudging over the bottles and stepping on the cigarettes, and smiled. 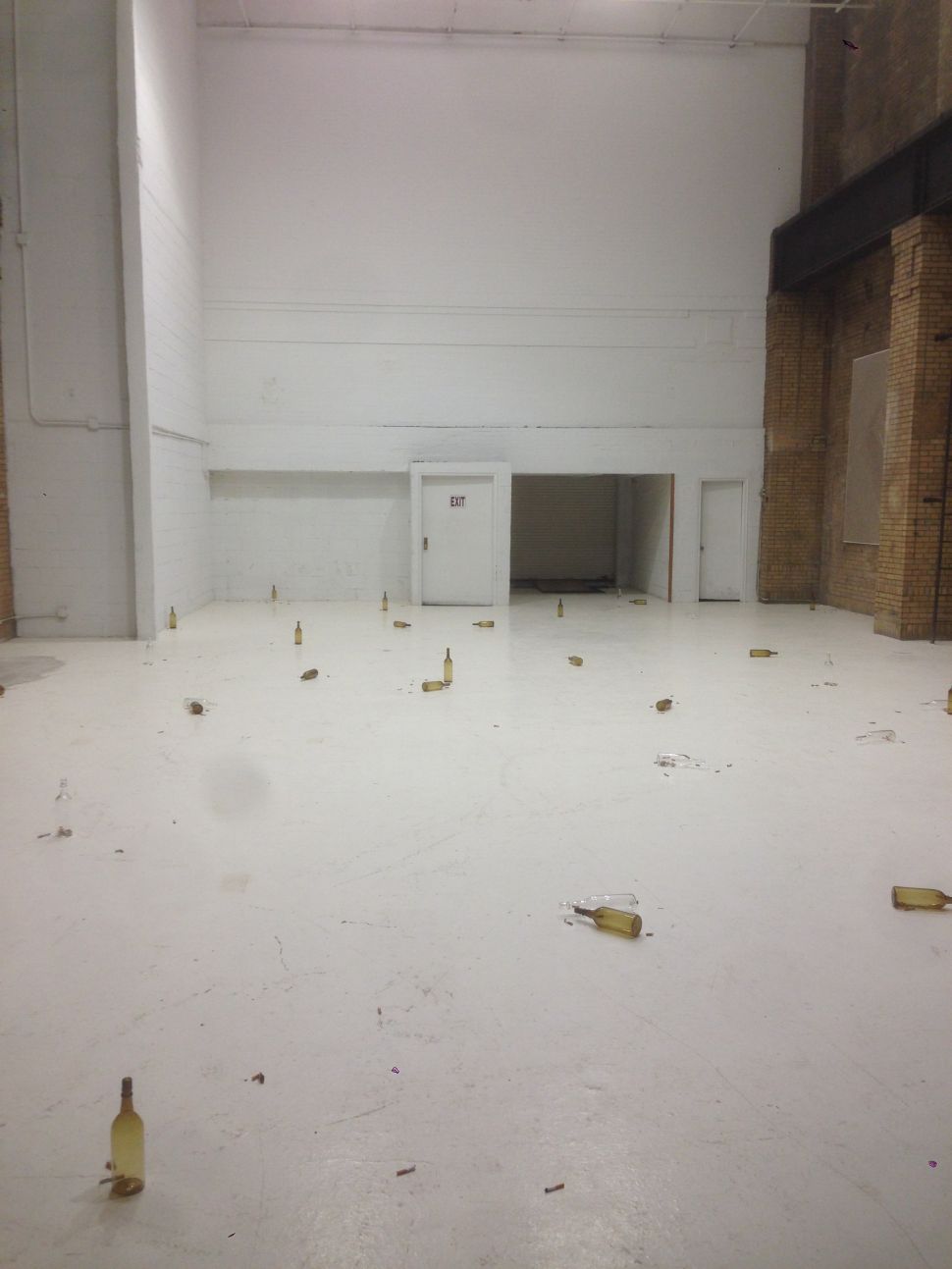