For a mass at St. Patrick’s Cathedral just days before Christmas, it was a solemn one.

The morning after two police officers were gunned down execution-style in the Bedford-Stuyvesant neighborhood of Brooklyn, Cardinal Timothy Dolan delivered a moving sermon as Mayor Bill de Blasio and Police Commissioner Bill Bratton sat in the front pew.

As he took to the pulpit, Cardinal Dolan spoke about the good news the church is set to deliver on Christmas.

“Now, some days that’s tough to give, this good news. This is sure one of them. Because we mourn the brutal and irrational execution of two young, promising, devoted police officers, Rafael Ramon and Wenjian Liu,” Cardinal Dolan said to a packed crowd of worshippers, tourists and media.

The two officers were shot—”assassinated,” as the mayor and police commissioner put it—through the window of their patrol car by  28-year-old Ismaaiyl Brinsley, who posted on social media that he was out for revenge for the police-related deaths of unarmed black men, Eric Garner and Michael Brown. The murder of the officers comes at a time of already heightened tensions between community, police and City Hall, amid days of protests after a grand jury opted not to indict an officer in Garner’s death. Police officers turned their backs on the mayor last night at Woodhull Medical Center; the police union has blamed the rhetoric of the protesters, and the mayor, for the deaths.

Cardinal Dolan—to whom Mr. de Blasio has turned before, including shortly after Garner’s death—made brief mention of that rising division in the city.

“As we tear up thinking about their heartbroken families, as we are in solidarity with our police officers, who themselves experienced a death in the family. And yes, as we worry about a city tempted to tension and division, good news this morning might seem distant, difficult, even somewhat indiscreet,” Cardinal Dolan said. “Here we are anticipating the joy of Christmas, and we feel like we’re nearer to Good Friday.”

But even as he referenced the crucifixion of Christ, the darkest day of the church’s year, Cardinal Dolan said the good news of God is never erased, “for a believer.”

“So I propose to you this morning, more than ever, we need a little Christmas right this very moment,” he said.

The spiritual leader of New York’s Catholics delivered his remarks just as another, more controversial preacher, Rev. Al Sharpton, addressed the media this morning. But while Mr. de Blasio has been attacked by police unions for his relationship with Mr. Sharpton, seen by many as divisive, it was Cardinal Dolan with whom the mayor chose to appear. Mr. de Blasio and his wife Chirlane McCray rose during communion, walked to the altar and knelt, where they received a blessing. He made no comments to the media after the mass.

In his sermon, Cardinal Dolan made note of today, December 21, being the darkest of the year—and said that, for years, civilizations feared what would follow, only to find the sun would rise again. Believer in Jesus Christ, he said, are also taught to trust that light will conquer darkness.

“And when we’re tempted to question that as stupid and silly, he whispers, ‘Be not afraid.’ Fear is useless. What is needed is trust,” Cardinal Dolan said.

Cardinal Dolan has spoken out about the ongoing tensions in the city before, penning an editorial in the Daily News urging unity and decrying both protesters using anti-police rhetoric and police unions who called on the mayor not to attend police funerals just days before these deaths.

Today he spoke personally about how he learned of the death of the officers: from police officers assigned to provide security on a visit he was making to a Bronx church yesterday.

“Instead of their characteristically buoyant greeting to me, I found them somber and downcast. And I went over to them and said, ‘Fellas, what’s wrong?’ And they told me, the first I had heard of it—the chilling news of the execution of their two members,” Cardinal Dolan said.

He asked the officers to take him over to the 46th Precinct across the street. There, he said, he met with officers, praying with them and embracing them, trying to console them. It was, as the mayor observed yesterday, “a death in the family” for them, Cardinal Dolan said.

Cardinal Dolan went back to the church, “stumbling through mass in Spanish,” he said. But caught out of the corner of his eyes two police officers on bended knee, hats on the floor, praying.

“And I silently prayed that they would hear those words that Mary heard, deep down: ‘Be not afraid. I am with you,'” he said.

Cardinal Dolan turned to Mr. Bratton and Chief of Department James O’Neill, seated next to the commissioner.

“Commissioner Bratton and Chief O’Neill, would you tell your officers that God’s people gathered in St. Patrick’s Cathedral this morning thundered with prayer with and for them, that we love them very much, we mourn with them, we need them, we respect them, and we’re proud of them and we thank them? Would you tell them that, Commissioner Bratton and Chief O’Neill?” Cardinal Dolan asked, before turning to the congregation. “Am I correct in thinking that that’s your sentiment everyone?” 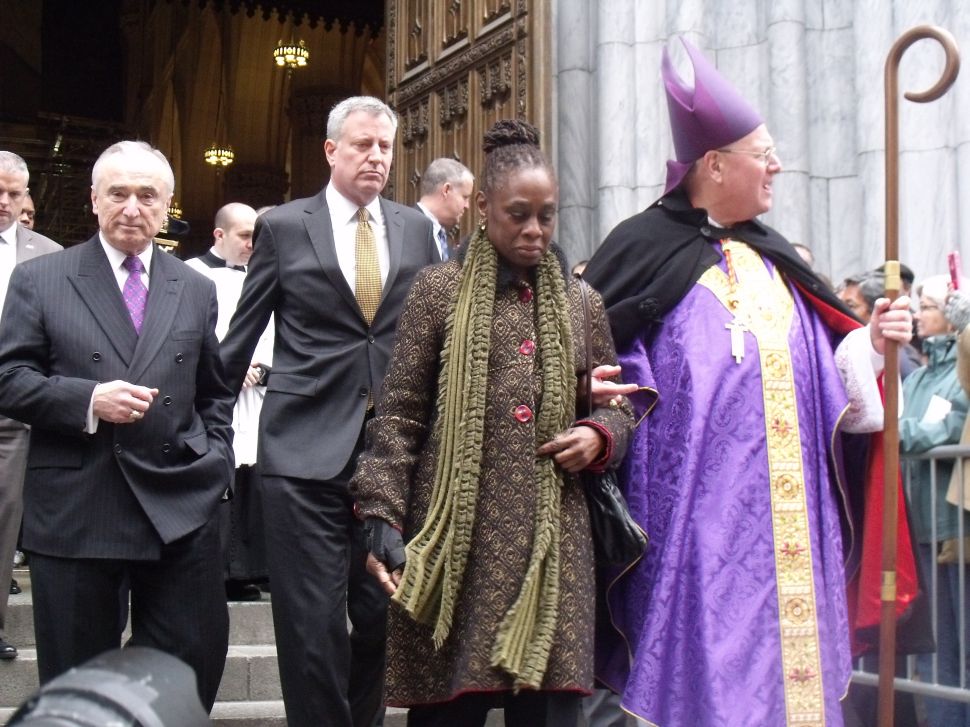