I was not surprised that Al Jazeera’s report of our full-page ad in the New York Times championing Israel as a bastion of gay rights and indicting Hamas and Iran for slaughtering gay men and women would have contained the charge of “pinkwashing.” Yes, we’ve heard it before. Whenever we speak of Israel’s virtue it’s simply an attempt to conceal its underlying evil.

I was, however, surprised to see Haaretz focus on the smear.

Let’s be clear. Gay men and women live in fear for their very lives throughout the Middle East. They are brutalized, shot in the head, hung from cranes, beaten, and savagely tortured.

This is not a political issue for me. It’s personal.

I have a gay brother. He is an orthodox Jew. I first started thinking about doing this ad upon witnessing my brother’s unquenchable love for Israel and his desire to move there.

How could any gay man want to leave Miami and move to the Middle East? You’ve got to be out of your mind.

But not Israel, a country that bestows dignity and rights on all.

So I asked my close friend Rennick Remley, as a gay non-Jewish man who has visited and loves Israel, if he would be featured in the ad. He agreed instantly.

My good friends at Stand with Us, who do such an outstanding job defending Israel, agreed to co-sponsor the ad with us.

The reaction has been illuminating.

Haaretz ran with this headline: “Ad in New York Times sparks debate over Israeli ‘pinkwashing.” They then added this subtitle: “Many commentators object to use of gay rights to promote support for Israel while downplaying Israel’s treatment of Palestinians.”

Then, dismissing any pretense of journalistic integrity, they switch in the body of the text to, “Some commenters on Boteach’s Facebook page, where he posted an image of the ad, objected to his use of gay rights as a way to promote support for Israel.” In the space of two paragraphs we went from many commenters to some. And who were the some? Two people on my Facebook page!

So here you have one of Israel’s leading newspapers inventing a non-existent story. The larger story of a gay non-Jewish American being brave enough to proudly stand with Israel against all threats in a full-page ad in The New York Times has instead become a story about the two people out of six hundred comments who attacked the ad on my Facebook page.

Here is one of the critiques from my Facebook page quoted by Haaretz: “#Pinkwashing israeli apartheid… What kind of ‘man of god’ uses other peoples struggles to promote ethnic cleansing and apartheid?” So a commentator of dubious credibility who happens to be one of several hundred comments on my Facebook page, and who accuses Israel of ethnic cleansing and apartheid is treated as if this were a BBC Editorial.

Haaretz touts itself as a champion of liberal values. Yet the cause of gay men and women being slaughtered across the Middle East is of so little importance to them that they will attempt to undermine a full page ad in the world’s foremost newspaper just in order to attack Israel. With Israeli papers like Haaretz who needs Al Jazeera?

We’ve run many full-page New York Times ads on behalf of Israel over the last two years. This ad has taught me the most.

None of this is new. Everyone knows that Israel haters do not love Palestinians. They hate Israel.

Rather, the revelation from this particular ad is how little liberals care even about liberal values. They could care less about gay rights in the Middle East. They condemn Israel for building a wall to stop suicide bombers while remaining silent as Iran literally hangs gay men from cranes. They remain silent as Palestinian women are murdered in honor killings and as Islamic women across the Middle East are shot in the head for attending school, even if they are awarded the Nobel Peace price for it. They move to boycott Israel even as Hamas stands by its charter to murder Jews wherever they may be found.

The left’s hatred of Israel is so great it trumps their love of gays, care for women, respect for democracy, and love of liberty.

My gosh, that’s a lot of hate, as our ad this week clearly exposed.

Rabbi Shmuley Boteach is the Founder of This World: The Values Network, which regularly stages large-scale, values-based debates on the leading issues of our time. He is the author of Judaism for Everyone. Follow him on Twitter @RabbiShmuley. 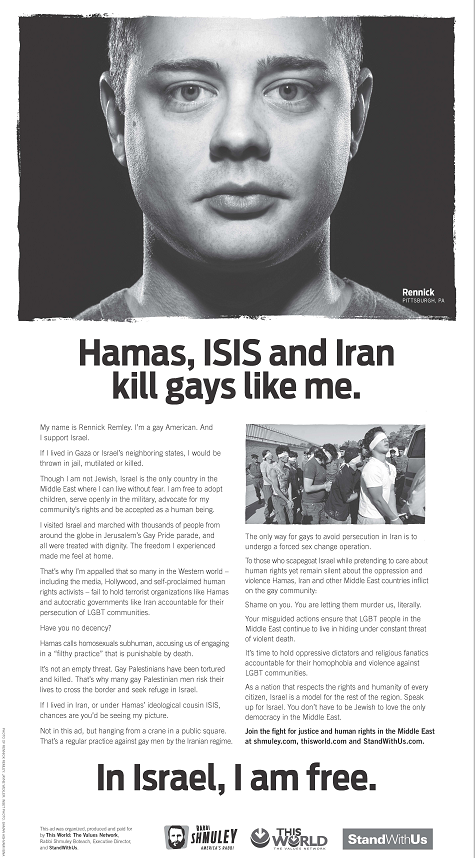