For a series that showcases strong, older female actresses, I’m not sure how to go about giving superlatives for this week’s “Blood Bath.” Good job showing Grrrl Power? Really? In an episode where Elsa throws a knife into Edith’s eye and then beheads her? Way to go with the addition of a plus-sized actress, Chrissy Metz, playing Barbara, AKA the Fat Lady AKA “Ima Wiggles?” Err…that doesn’t feel right either, especially when you check out Evan Peters’ look of disgust when Elsa suggests that Jimmy finds solace in his mother’s death in Barb’s bosom. (Though after he drunkenly throws off Esmerelda, Jimmy does end up crying bourbon tears into Barbara’s ginormous breasts, an unfortunately common occurrence that any bigger lady will immediately roll her eyes at in recognition. “Oh yeah, NOW that you’re wasted and had a fight with your skinny girlfriend, you want to take care of you? Fuck off, Red Lobster.”)

I’m not sure if watching Grace Gummer proudly claim her new role as Lizard Girl in front of her newly tar-and-feathered father feels more satisfying for audiences than watching her pound out new Carnivore.com essays as Haley on The Newsroom, but for me, both characters leave me somewhat cold in their on-the-nose self-righteousness. We get it girls, guys are dicks…you don’t need to cut off your father’s penis/write about your relationship with Jim, the world’s whiniest producer, for us to hear you roar. Sometimes it’s enough just to be. (Also: not to bring more Newsroom drama into another recap, but you KNOW Penny would never tweet that shit about Boston. Even tattooed in 1950’s Florida, she’s way too classy for that.)

There are other elements of this week’s episode that leave me a little hesitant to give Ryan Murphy’s his solid B in Feminism Studies this week. First of all: fuck Dandy Mott. Seriously, that kid is the worst. He’s also very possibly MeatyFace or whatever the hell the bad guy’s name was from Asylum. (ScaryFace? I’m actually refusing to look it up because I know I’ll remember it.) By killing Gloria and tarnishing his own lineage by comparing his family to the Roosevelts (but not in the awesome way, more like in the “intermarrying the bloodlines” way), Dandy’s petulant bad boy act has triumphed over his mother’s cloying affection. (BLOODYFACE! NAILED IT!) And this is problematic. Because when you look at the narratives of these momma boy serial killers in film, the mother has to be at once smothering AND removed in order to cultivate the perfect amount of Norman Bates-yness. Right? She can’t just be answering to every murderous whim of her son, or else we’re implying that it’s ONLY his bad blood that made him a monster in the first place; Gloria was codependent and enabling, sure, but she was never his authority figure. She was never a Mommy Dearest Monster.

And for Dandy, who is already a sort of fey Male Ego Unchecked, I would have liked to see a less silver spooning, and a little more sexual psychodrama between him and mommy to explain why he is what he is. The idea that Gloria was mostly innocent–just guilty of the sin of loving her terrible son too much–does nothing for me. It both let’s her off the hook too easy and denies the influence that mothers wield over their sons when they are the only guardians. Gloria was too saintly, too passive and too submissive to ever be Dandy’s mother. This little Joffrey deserved a Cersei Lannister of a mom: a roaring giant who told her son he could be anything he wanted as long as he remained her little boy forever.

It made me sort of miss the familial dynamics of season 1, where Even Peters played a version of Dandy with Tate, but his mother was Jessica Lange. Now there’s the type of weepy kitchen sink melodrama that gives you chills. Though she excused her psychotic son’s behavior with a million different excuses, by the end of the season you’d seen enough in flashbacks to know that mom had more than a helping hand in how her son became a serial killer. She murdered her husband and the maid and buried the bodies in the backyard. She’d made him live in a house of ghosts, where his deformed brother was chained upstairs in the attic and there was a monster living in the basement. She gave him Denis O’Hare as a stepdad and then demanded they all act like the Cleavers. Now there was a mother who could turn out a rotten egg.

Now, obviously, I’m only talking about fictional characters here: what makes for a good story and interesting relationships on TV rarely resembles what’s on offer in the real world. I’m not trying to say that Ted Bundy or Charles Manson or whomever should be judged as the sole byproduct of their mother’s smothering neglect. But to deny that link on a show that has been able to transcend its Penny Dreadful origins specifically because of the strength of its female characters is to risk turning this once-subversive narrative into just another piece of horror schlock. 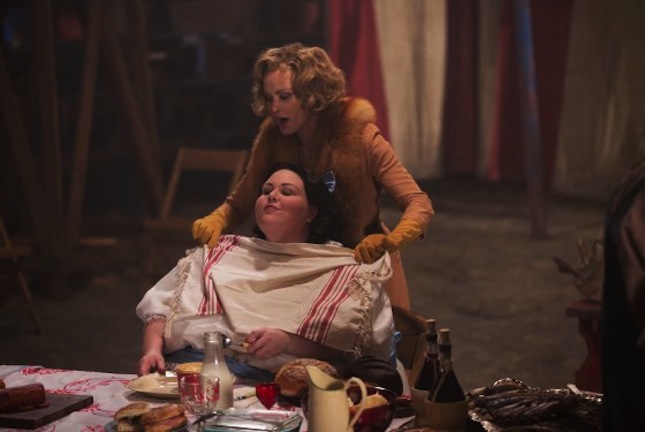