I saw a nasty thing walking with my children in New York City on the Sabbath. On Madison Ave in the mid-sixties, we saw a group of people, chanting, singing. Was it Christmas carolers? As we got closer we saw it was a protest. An anti-Israel protest.

But this one was not outside an Israeli Consulate or Embassy. It was outside a commercial, retail store. A diamond store. Owned by Lev Leviev, the Israeli billionaire businessman and philanthropist.

I was appalled. I got closer. The protesters were accusing Leviev, private Jewish citizens, of stealing Palestinian land, persecuting Palestinians, and supporting an imperial Israel.

I asked the protesters who Mr. Leviev was and why they were protesting him. Was he Israel’s Prime Minister or Foreign Minister? At least the Ambassador. How else to explain why they would be protesting outside a business simply owned by a Jew.

They told me he was an Israeli who supported Israel’s persecution of the Palestinians. He was a known, high-profile Jewish businessman. They were there to discourage customer from buying from his store.

I had had enough.

Amid the protestors, I raised my hands into the air, and said loudly, “Long Live Israel, the only democracy in the Middle East. The only country in that dark region that is a bastion of liberty and human rights. A place where Palestinian women need never fear honor killings. A place where Israeli Arabs have more guaranteed rights than any Arab nation. A place where gay Palestinians need not fear being shot in the head on false charges of collaboration. A place where Arabs can protest publicly, just like all of you, and not be shot. Long live righteous and majestic Israel.”

Instantly, all the protestors forgot about Leviev and turned their ire toward me. I was now the devil. They were shouting at me: “F—ck off!” “Go F—ck yourself!”

“How revolting of all of you to protest a business because it’s owned by a Jew. What is this? Nuremberg 1934? ” Absolutely reprehensible.

My kids were now engaged in the fight, singing “Am Yisrael Chai. The Jewish people are alive and well.” We were louder than the protestors.

The Israel-hating websites, of which there are an endless number, lied, as usual, and said I had chanted, “Down with the Palestinians.” The fraudulence of the charge is readily evident in the video which I have specifically included from their own websites. They then added that I gave an entire speech about the Jews of Hebron, which just shows the utter brazenness and boldness of Jew-hatred. The Israel-haters believe in “the big lie,” and practice it at every turn.

The police came over, trying to quell the confrontation. They have a permit, he said. They have the right to protest.

God bless America. I respect their right for public demonstration. But I also respect my right to write this in a column.

Jews of the world: Wake up. There has never been an assault on us like this in our lifetimes. And we are allowing it. Through out timidity and through closing our eyes and pretending not to see, it’s growing. Our enemies are arraying against us. They have substituted anti-Israelism for anti-Semitism. But it’s the same sentiment.

This holiday season the world’s anti-Semites are giving thanks for the existence of the State of Israel. If not for Israel they would have no camouflage for their Jew-hatred. Israel has given them cover. “It’s not the Jews we hate, but just the Jewish state.” It’s not because we have an inherent dislike of Jews. We just hate occupation.

But then they call each other on their IPhones, even though they’re made in China, which has been occupying Tibet since 1950.

Only a weak community would give these haters a fig leaf to cover over their clear bigotry, prejudice, and hatred.

My kids were flabbergasted that a private Jewish business could draw accusations of Palestinian persecution. It suited the protesters well that it was a diamond dealer. Perfect stereotype. But which Jewish business would they target next?

A few hours later we went to Chabad’s public Menorah lighting outside the Plaza hotel on 5th Ave. There was a small protest against Israel there, as well. Joining the protest was a 20-something man who told us that the Jews owned all of 5th Avenue. He pointed across the street to the famous Apple 5th Avenue store. “Apple is owned by Jews.”

I looked at him.

“Um, erg, hmmm. Did you know that Steve Jobs was the son of an Arab-American? So how does that square with the Jews owning Apple?”

“Well the Jews bought it from Jobs with the endless money they have.”

Is there no respite from all this Jew-hatred? Can we not get away from them even at a Menorah lighting?

The other day Harvard University students voted to eject SodaStream from its cafeteria for the terrible sin of employing hundreds of Palestinians at a plant in Maale Adumim that treats Arabs as the absolute equals of their Israeli counterparts. Without SodaStream these Palestinian families would be destitute. But Palestinian activists at Harvard, animated by hatred of Israel over love for Palestinian lives, demanded a boycott and the caterer capitulated.

And so it goes. Jewish timidity in the United States is allowing more and more of these outrages to take place.

I wonder if we recognize the seriousness of what’s happening or will it engulf us before we take decisive action?

What is needed is an immediate move to organize Jewish students on campus to respond publicly to the anti-Israel onslaught at universities. We need public demonstrations against Israel-hatred, anti-Semitism, and in favor of freedom and democracy in the Middle East. Jewish students should not just be fighting BDS but should be going on offense to push through resolutions in the City Councils sanctioning Hamas and the Palestinian Authority for not holding elections in a decade and transforming Palestinian society into dictatorships.

Organizations that dare hold ordinary Jews responsible for actions in the Middle East—the equivalent of protesting an Arab-owned department store in Detroit for the butchery of Bashar Assad in Syria—should themselves be targeted for public demonstrations, calling them what they are: anti-Semites.

And let’s honor those brave individuals who have stood up to BDS.

Every June our organization hosts the International Champions of Jewish Values Gala Awards Dinner in New York. Last year the Hollywood celebrity we honored was Sean Penn for his unrivaled bravery in going to Bolivia to rescue a Jewish businessman who had been wrongly incarcerated.

The year before, we honored my dear friend Dr. Mehmet Oz, a Muslim, for his tireless efforts to promote the value of human life by getting us all to live more healthy lives and for his continued friendship with the Jewish people. A few months after the award we hosted Mehmet and his family in Israel.

This year we intend to honor Scarlett Johannson for standing up to the pressure to abandon SodaStream, a company that is a model of Arab-Israeli brotherhood and fraternity.

Scarlett, if you’re out there, please come to New York and accept. The dinner is on June 3, 2015.

Rabbi Shmuley Boteach is the Founder of This World: The Values Network, which regularly stages large-scale, values-based debates on the leading issues of our time. He is the author of Judaism for Everyone. Follow him on Twitter @RabbiShmuley. 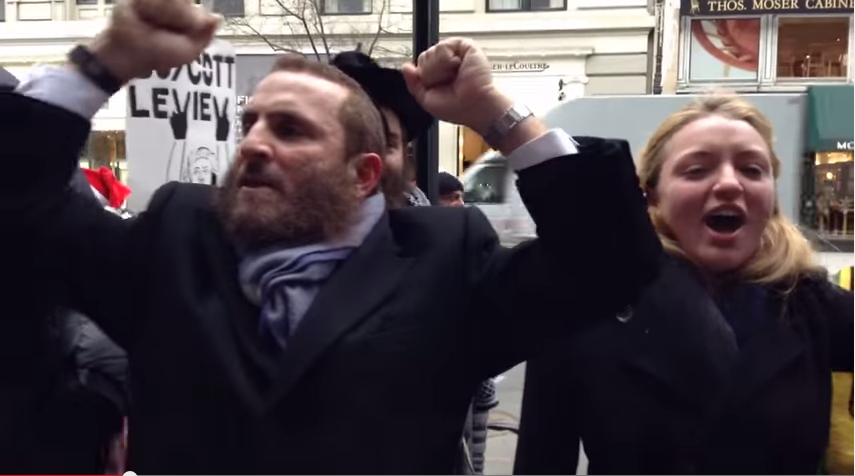